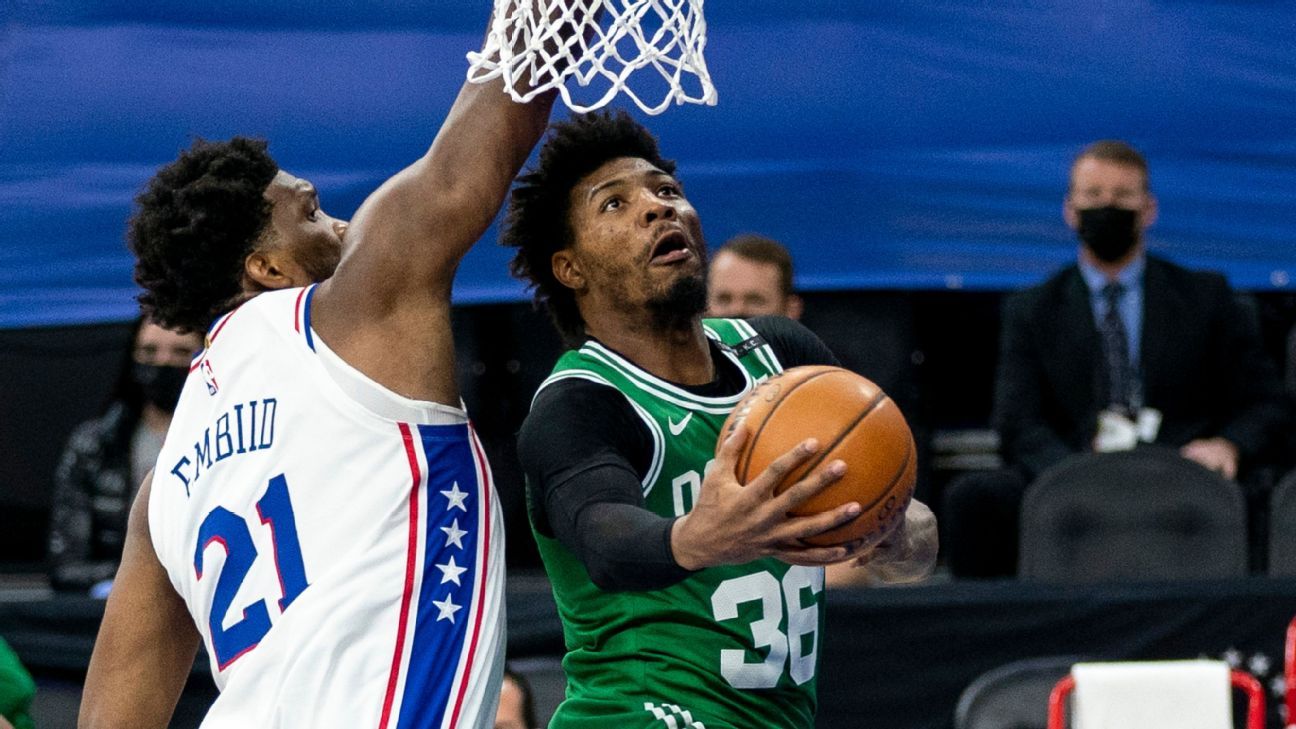 After Philadelphia 76ers star Joel Embiid wore out a path to the free throw line in a 117-109 victory over the Boston Celtics on Wednesday night, Celtics guard Marcus Smart expressed his displeasure with the way the game was officiated.

Embiid made and took more free throws than the Celtics did as a team, going 17-of-21 from the line compared with 13-of-20 for Boston. The Sixers finished 36-of-45 as a team.

It’s hard to win, period, when Embiid — who finished with 42 points, 10 rebounds, two assists and two steals — plays like he did against Boston, as he continued to make his case to be firmly in the running for the league’s MVP award through the first month of the season.

Regardless of who was thrown at him — be it Tristan Thompson, who started, or Daniel Theis, who closed — Embiid had his way, scoring double figures in each of the first three quarters and then scoring six points in the final seven minutes, along with making a key steal, to help put the Celtics away.

Part of that stretch, however, included Embiid making three trips to the foul line — trips Smart thought he made, in part, by embellishing contact.

“It’s tough,” Smart said. “It is tough. Especially when we’ve got our hands up a lot of the times, and he flails and gets the call, and then down on the other end we’ve got our guys attacking the rim, getting a lot of contact and we’re just not getting the whistle. It’s tough to play like that. It’s tough.

“If the roles were reversed I’d do it every time. I mean, I’d be on too if every time I threw my arms up or every time I got touched I’m going to the free throw line. I mean, it’s kind of hard not to get into a rhythm that way when you shoot 21 free throws alone and they allow you to hack on the other end.

“It’s tough, but we battled. The team did a good job. We were right there to give ourselves a win and try to run it back again on Friday.”

Embiid was informed during his postgame interview of Smart’s comments. Naturally, the big man had a few thoughts about how Smart saw the game play out, pointing out that Smart is rather well-known himself for selling calls to the officials.

“Marcus Smart just told me that I flail a lot?” Embiid said. “Come on. I’m sure he knows himself, and he knows his game, too, he does a lot of that. And I don’t think I do. I mean, if you watch basketball and if you’re a student of the game and if you actually pay attention during the game, we all see. Every single foul, I get fouled. They probably don’t call all of them, like the last one. There was three minutes left, I went up and that was a foul and they knew it, but they didn’t call it. So there’s a lot that they don’t call, and there’s a lot that they call because you have to.

What was clear Wednesday was that, even if one or two foul calls could be argued, Embiid was the dominant figure in the game. With Jayson Tatum sitting out, the Celtics had four players finish with at least 19 points: Jaylen Brown (26), Smart (25), Theis (23) and Kemba Walker (19 in just 22 minutes).

But despite that offensive output, the Celtics could do nothing with Embiid all night. He used his size advantage to get one clean look at the basket after another.

Celtics coach Brad Stevens, when asked about Embiid’s repeated attempts to the charity stripe, simply said his team had to do a better job of preventing him from going there.

‘We’ve got to do our best to play without fouling,” Stevens said. “I’ll go back and look at each one, figure out what we can do better. He’s gonna score some, but 42 is too much. It’s gonna be hard to win a game when the best player on the other team scores 42 points.

“You have to go back to how can we be better. He not only scored those points, he also handled the double pretty well on a couple of occasions that led to three points. He had a huge impact on the game tonight and he was terrific.”

Wednesday’s game was the second time in eight days Embiid had 40 points at home against a fellow Eastern Conference power. He scored 45 points, including 35 points in the second half and overtime, Jan. 12 against the Miami Heat.

The win improved Philadelphia to 10-2 when Embiid plays this season. Coach Doc Rivers and Embiid’s teammates sang his praises afterward.

“It’s not sort of, it’s for sure MVP-caliber [play],” said Tobias Harris, who had 22 points. “Night after night, he controls the game, controls the paint.

“[He’s] for sure putting on an MVP year, and one of the biggest things is that we continue to sustain it game after game, and we progress even himself continue to progress throughout this year. But I’m happy for him because it’s what he’s put in and when you win, or are successful as a team, you get that type of notoriety for sure.”