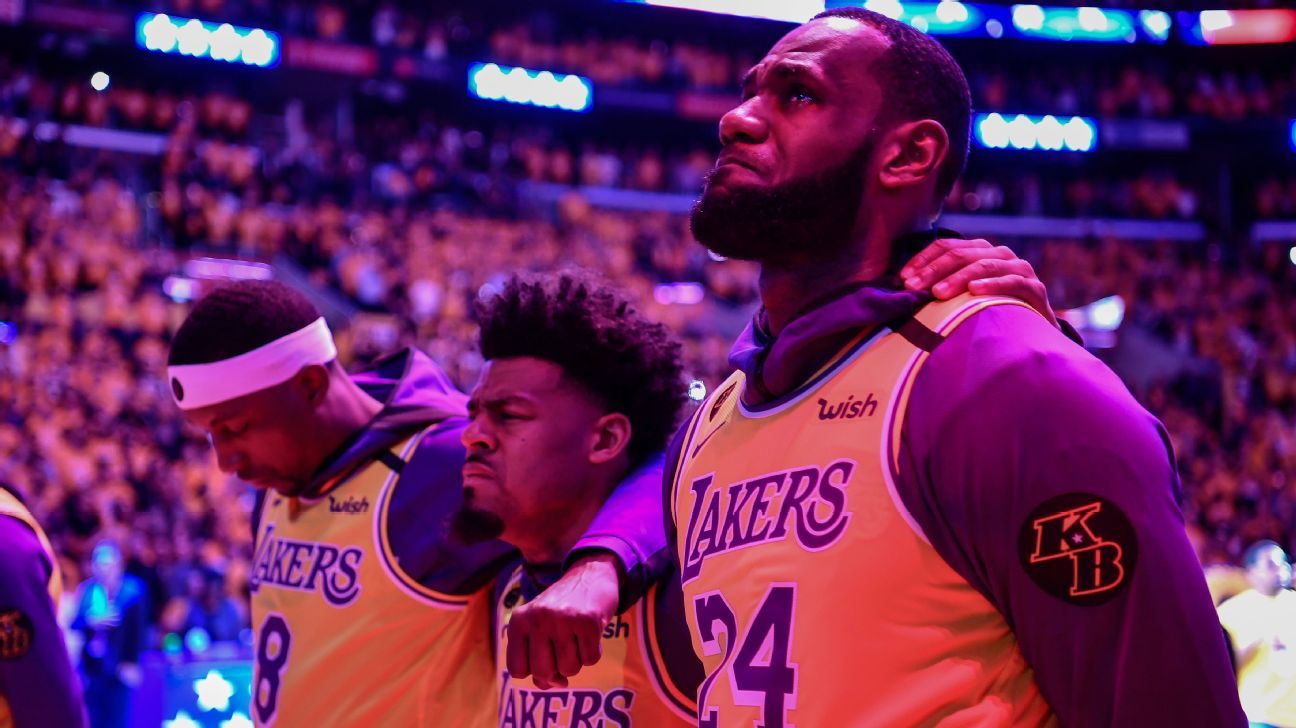 This story was originally published on Feb. 24, 2020. Jan. 26 is the one-year anniversary of the helicopter crash that killed Kobe Bryant, his daughter Gianna and seven others.

THE WEARY GROUP trudged across the tarmac and onto the team plane at Philadelphia International Airport.

Awaiting the Los Angeles Lakers at the end of their 10-day, five-game road trip was a cross-country trek back to L.A., with an 11 a.m. ET departure time allowing for a 2:05 p.m. PT scheduled arrival time. This meant their Sunday was supposed to be salvaged by some semblance of an off day in Southern California, after touring through Houston, Boston, New York and Philly amid the chill that comes with late January in the Northeast.

The traveling party filed in — broadcasters, media relations and team support staff in the back; coaching staff, training staff and players in separate sections going from tail to cockpit. It was one of those flights where those in window seats pulled the shades down as soon as they sat down, looking to doze off before the plane even took off.

But not everyone could sleep.

A few hours into the flight, as the plane hovered above the Midwest, Lakers coach Frank Vogel’s face was lit by the glow of a screen as he pored over game tape from the team’s 108-91 loss to the 76ers the night before.

The poor performance had soured a night in which LeBron James had eclipsed Kobe Bryant for No. 3 on the all-time NBA scoring list — in Bryant’s hometown, no less.

As Vogel watched clip after clip of the Sixers dismantling his squad, he was approached by Lakers director of media relations Alison Bogli. She had seen a news report on her phone: Kobe Bryant had died in a helicopter accident.

“There was that uncomfortable time, feeling like, ‘This is a crazy report,'” Vogel says. “Like, ‘This is not true. There’s no way.’ My expectation was to hear that it was a false report.”

Bogli, whose Lakers career dates back to the late 1990s, was texting with team personnel back in California, trying to gather information. It wasn’t long, sources say, before Lakers controlling owner and president Jeanie Buss replied. It was true. Kobe was gone.

“That’s when I decided if it’s 100 percent true, then [the players are] all seeing reports and wondering,” Vogel says. “I felt like, as their coach, as their leader, I just instinctually felt like they should hear it from me immediately.”

MORE: Stories from those close to Kobe

ANTHONY DAVIS WAS another restless passenger.

“I can’t sleep on planes, and I’m watching my iPad,” Davis says.

Out of the corner of his eye, the Lakers’ star big man saw a phone screen flash in one of the rows surrounding him — a sign of activity amid the slumbering basketball squad, but nothing noteworthy enough to call his attention away from “Avengers: Endgame.”

Only the activity grew.

When Davis next glanced away from his screen, his eyes focused on Dwight Howard and DeMarcus Cousins, waving their hands in his direction, their urgency muted by Davis’ noise-canceling headphones.

“So I remove one of my headphones, and I look,” Davis says. “And Dwight tells me, ‘Man, Kobe died.’ And me thinking as invincible as Kobe Bryant is, I’m like, ‘Kobe who?’ Because I’m like, that’s not — it’s not Kobe Bryant.

The players section, quiet moments ago, began to stir, members of the team scrambling to log on to the in-flight Wi-Fi.

“By this time, all the players have woken up,” Davis says. “Everybody’s trying to get to the internet to get on their phone and see what’s going on. ‘Is it true?’ Or, ‘What’s going on?'”

“It didn’t hit me. So I turned my Wi-Fi on just to see,” Lakers guard Quinn Cook said on the Inside the Green Room podcast, hosted by fellow L.A. guard Danny Green. “I got 200 messages. Twitter is just going crazy.”

Jared Dudley, from the air, became the first member of the organization to comment on the tragedy.

Speechless on this plane ride home! A sad day bruh! RIP Kobe Bean Bryant! Prayers go to his family and loved ones 🙏🏽🙏🏽🙏🏽 This doesn’t even feel real man..

Meanwhile, James, like Davis and Vogel before him, could not accept what he was hearing.

“I remember the first thing Bron said to me was, ‘Man, y’all stop playin — like, stop playing with me,'” Davis says. “And I’m trying to get on the internet. And Dwight, like, you can see him start crying. He was like, ‘It’s true.'”

For Howard, whose first stint playing for the Lakers had been marred by a rocky relationship with Bryant, the emotions came swift and hard.

“It was like a movie scene when it happened,” he says. “I was extremely hurt.”

Howard folded his 6-foot-10, 265-pound frame into the nearest bathroom stall. And there the big man began to weep.

IN 2011, PHIL HANDY, a respected player-development trainer, had joined the Lakers’ coaching staff after carving out a career playing internationally. He had been part of the team of trainers tasked with the job of keeping Bryant’s battered body running through the end of his career.

After working in similar roles on the Cleveland Cavaliers‘ championship team alongside James in 2016 and with the Toronto Raptors‘ title team alongside Kawhi Leonard in 2019, Handy was hired back by the Lakers last summer as an assistant coach under Vogel — no longer just a workout guru, but a trusted voice in team strategy.

Vogel woke Handy up on the plane to let him know what had happened to Bryant.

“I looked at Frank, and I almost fell out of my seat,” Handy recalled on the Inside the Green Room podcast. “It’s one of those things you can never be prepared for. It’s not what you expect when you wake up. Just the last thing; your mind is not even there.

“I got up and went to the bathroom, and Kyrie [Irving] started calling me. He called me about 10 times, and I couldn’t pick up the phone. I knew he was crushed.”

Jan. 26 is the one-year anniversary of the helicopter crash that killed Lakers legend Kobe Bryant, his daughter Gianna and seven others.

• Shelburne: Kobe and Pau’s brotherly bond
• MacMullan: Kobe’s infinite complexity
• Lowe: Inside what made Kobe great
• The longest flight in Lakers history
• Kobe’s careers as No. 8 and No. 24
• What it’s like to share the Kobe name

Even if Handy had been able to hold it together enough to talk to Irving — who considered Bryant a mentor and who was coached by Handy in Cleveland — there was no use trying to ring the Brooklyn Nets guard. When your plane is nearly 38,000 feet in the air, there’s no cell service to make a call.

With information still sparse and calls impossible, some members of the broadcast crew in the back of the plane had logged on to the Delta app to stream live television coverage of the crash.

When a member of the team’s security, who had worked with Bryant both when he was a player and during his post-playing days, heard that the helicopter had come down in Calabasas, California, he thought of the familiar flight route from Bryant’s home in Newport Beach to his Mamba Sports Academy in Thousand Oaks. His mind darted to Bryant’s daughter Gianna and her typical weekend games at the facility, fearing the worst.

Vogel, through Bogli, knew the painful details when he approached the players: Kobe, Gigi and seven other victims had been lost forever.

ONE BY ONE, the coach made his way through his players to deliver the incomprehensible news.

“It was just a daunting task of just grabbing each guy one-on-one and letting him know,” Vogel says.

Some players had already discussed the report as Vogel came to verify it.

“Everybody was crying,” Davis says. “It was just like something that we didn’t believe, something that was shocking to all of us. Because Kobe, he’s touched so many, you know — players on this team, staff members. You know, Judy [Seto], his trainer; Rob [Pelinka, his] agent; Robert Lara, security. He touched so many people.”

James, who had fielded a congratulatory phone call from Bryant that very morning before boarding, gathered the players together.

In the same spot on the plane — among the mismatched blue and maroon vinyl seats — where the players had posed for a group photo after a perfect December road trip had pushed their record to 20-3, the group embraced.

James, who had scribbled “Mamba 4 Life” on his sneakers the night before, led the team in prayer.

“It was just off the top off my head, just off the cuff,” James says. “I think it was needed for us to come together and just give thanks to the man above.

“Even though at times we question him and question why he do some of the things that he do, know that he’s never made a mistake. And just hope that he has his hands on top of Vanessa [Bryant] and the kids at that time, and hope that he continues to watch over all of us. So, I don’t know, it wasn’t something I thought about. It was something that just kind of came to me, and I said my piece.”

IF NOT FOR an emphasis on sleep science, the Lakers would have already been in L.A. and dispersed back to their individual homes by the time Bryant’s helicopter went down. Only recently has the team started staying overnight at the end of a road trip.

And so they were all together with more than two hours of flight time to go once the initial report had pinged on Bogli’s phone.

The remainder of the trip was enveloped by what one passenger describes as “suffocating silence,” outside of the sounds of muffled tears.

As the plane continued west, Cook scrolled through his photo archive, trying to find snapshots of him and Bryant together. Handy says he spent nearly an hour in the bathroom before emerging.

The pain was palpable for everyone on board. Some found purpose in comforting others — particularly someone like Seto, whose ties to Bryant ran deep.

But all they knew, for sure, was that they would land into a world that was irreversibly changed.

“We were just like, we just need to get off this plane,” Davis says. “We just want to get off the plane. And be with your families and, you know, just get back home.”

Gordon Hayward’s wife provides injury update, forward out indefinitely
The Whiteboard: 3 NBA trade ideas worth arguing about
Victor Wembanyama puts up 30-point double-double in win over Nancy
Andre Iguodala lost at least $1 million in FTX collapse
Thousands of Students From Across The Americas Join Forces to Bring Global Connectedness to the Sports Field