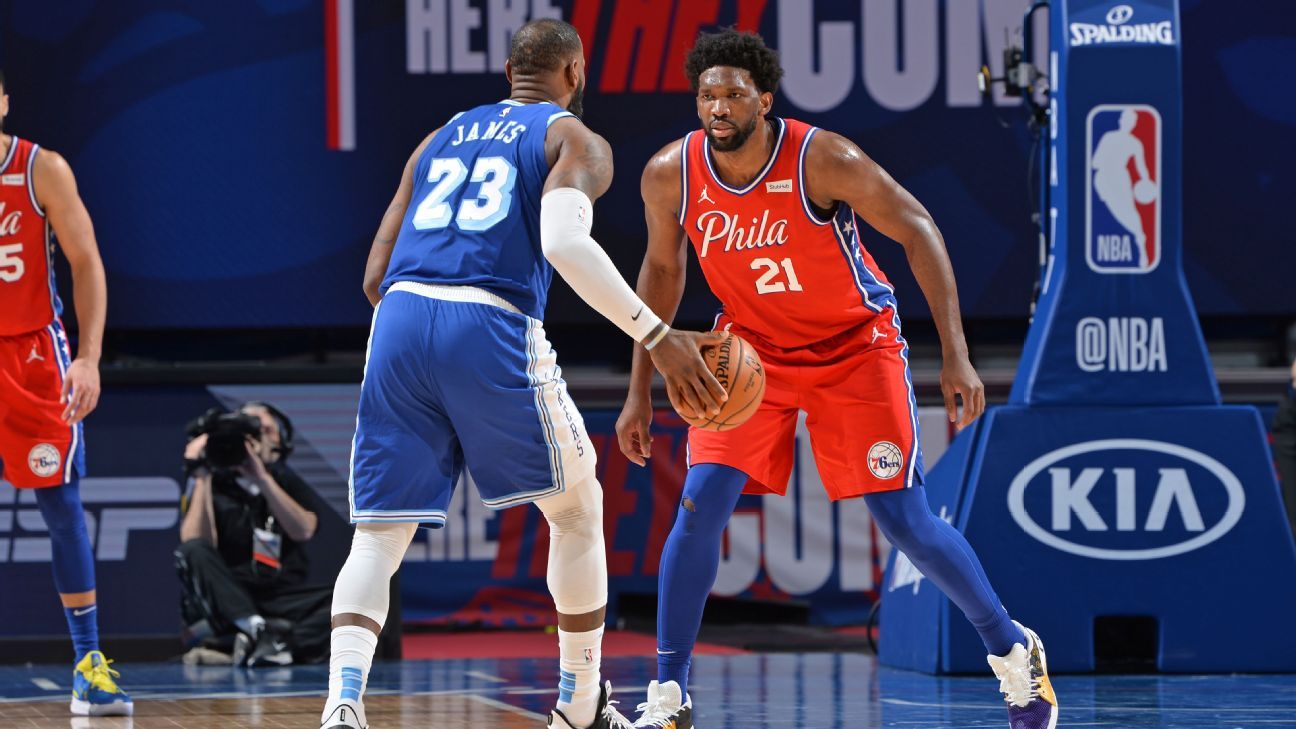 “Well, first of all, I mean you look at it, that’s a very dangerous play,” Embiid said of James’ foul, which came at the 5:44 mark of the third quarter. “I guarantee you that if it was me, I would have probably been ejected from the game, which has happened in the past with me getting flagrant fouls really for nothing.”

While Embiid was annoyed about James only being given a flagrant one — allowing him to remain in the game — he was equally bothered by the fact that, 68 seconds later, he was called for a flagrant one foul himself for an elbow to Anthony Davis that Embiid didn’t believe merited that penalty.

“When you compare that to the one that I got, which I thought I didn’t really hit him, I didn’t elbow him,” said Embiid, who had 28 points, six rebounds, four assists and two blocked shots in 38 minutes. “I might have touched him. But I don’t think it deserved the flagrant, if you’re gonna compare those two.

“Those are tough plays and I just thought, you know, it should’ve been a flagrant 2.”

For his part, Sixers coach Doc Rivers, a product of a different era of the sport that featured just a bit more physical play than today’s game, said he didn’t think either play should’ve been called for a flagrant at all.

His only concern in the moment was that Embiid, who fell several feet onto his back and writhed on the ground in pain, was all right after falling down. And while Embiid wasn’t moving as well after the play, he managed to stay in the game and help the Sixers win.

“First of all, LeBron’s not a dirty player,” Rivers said. “It was just a physical play and they had to call the flagrant, I guess.

“You know, all of the flagrants tonight … you can get a flagrant easy these days. But that fall was hard, and there was some concern there for sure. The fact that Joel kept going, clearly he wasn’t the same after that as far as his movement. And we kinda knew that and we used him a lot in pick and rolls because of that.”

Embiid, who has been on the injury report off and on recently with a sore back, which has kept him out of a game or two, said he won’t know how it responds until after he wakes up in the morning, but that he felt it limiting him during the game.

He said part of Philadelphia’s collapse down the stretch, which saw the Lakers score 13 straight points to erase 12-point Sixers lead with three minutes to go and take a 106-105 lead with 11.2 seconds remaining, was in part because of his back limiting his movement.

But just when it looked like the ongoing questions about the Sixers and their inability to close down the stretch would come back to haunt Philadelphia once again, the Sixers were bailed out by a terrific shot by Tobias Harris, who confidently took a pass, dribbled to the elbow against Lakers guard Alex Caruso and rose up to bury what turned out to be the game-winning jumper with 3.0 seconds remaining.

“I’m a person that I visualize myself in those spots, so when the opportunity came … that’s a shot I work on time and time again but in those moments just being confident enough to let it go and being OK with the result.

It was a shot that also allowed the Sixers to laugh off those late-game foibles, a stretch that nearly ruined what had been an incredibly impressive performance by the hosts over the first 45 minutes against the NBA’s defending champions, one Harris said his team viewed as a measuring stick given the opponent they were facing.

“I would say a little bit of both,” said Harris, who finished with 22 points, when asked if he’d focus more on being happy he hit the game-winner or being frustrated at Philadelphia’s sloppy play late. “I’d say there’s always growth in everything. So, tonight’s win is a great win for us against a great team, but, at the same time, we know we could be better, especially in the fourth quarter.”