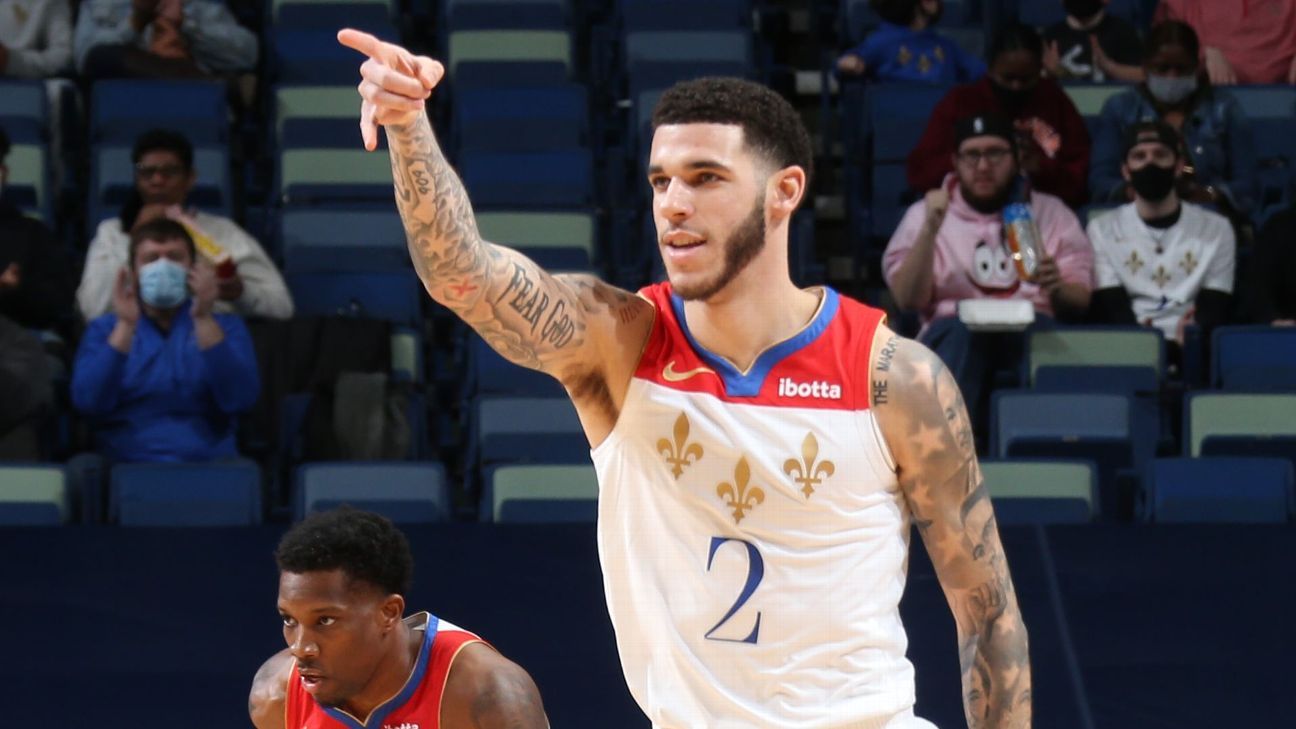 NEW ORLEANS — New Orleans Pelicans point guard Lonzo Ball is no stranger to trade rumors. He spent an entire season with the Los Angeles Lakers hearing about how he could possibly get dealt before ultimately landing with the Pelicans in the summer of 2019. But as Ball tried to navigate a rough start to the 2020-21 season, his name started to swirl in the rumor mill once again.

To his credit, however, Ball has responded with back-to-back standout performances. In the Pelicans’ game on Wednesday against Washington, Ball had nine points and four assists while hitting three 3-pointers in the first half while guarding Bradley Beal before rolling an ankle and missing the second half.

Ball returned to action Friday night and played his best game of the season in a 131-126 win over the Milwaukee Bucks. Ball had a season-high 27 points (tying his high in a Pelicans uniform), matched a career high with seven 3-pointers and had his second-best assist output of the season with eight.

“I just stay the course,” Ball said when asked if he had any extra motivation this week. “I’ve been playing basketball for a long time. I put a lot of work in and just try to play my game. That’s how I play. I just try to stay away from all the noise and just go out there and try to help my team win games.”

Pelicans coach Stan Van Gundy said he spoke with Ball earlier this week about being able to play through the noise and playing at a high level.

Pelicans executive vice president of basketball operations David Griffin said on ESPN New Orleans radio on Thursday that he thought Ball responded with one of his best halves of the year against the Wizards.

“I think he just realized and compartmentalized in his situation, it’s a good thing that people bring up your name because it means you’re coveted by other teams,” Griffin told the radio station.

For Ball, the response meant playing with more aggression, something his coaches and teammates have been imploring him to do all season.

Pelicans center Steven Adams, who had 20 rebounds against the Bucks, said when Ball is playing aggressively and trying to get into the paint and looking to score, it just helps the entire offense.

“He did a really good job at that,” Adams said. “Again, bro, with any player, as a defensive player, if you see someone with that body language, in terms of coming straight at you and like, taking those angles, it forces you to make a pretty drastic decision.

“It kind of puts you in a tough area. Instead of being passive, defenses can be like, ‘Oh, sweet, I can be passive also.’ Our guys were doing a good job of taking angles that made it so the defense had to rotate and then we were finding the open guy from there.”

The Pelicans finished with a season-high 32 assists, and Adams gave Ball credit as being the spark to the offense on Friday. It also helped that the Pelicans were making shots.

While the ball movement was key to the Pelicans’ success on Friday, the willingness to find the right shot also helped. And for Ball, it was about taking the shot when it was passed to him. He was 6-for-9 on catch-and-shoot 3-pointers, which showed he was willing to take the open looks instead of looking to make the extra pass.

“We love to see it,” Pelicans forward Zion Williamson said. “When he shoots the ball like that with confidence, even if he misses it, just him shooting it with the confidence it’s going in, that’s what we want Zo to do. He hit seven tonight and they were all big for us.”