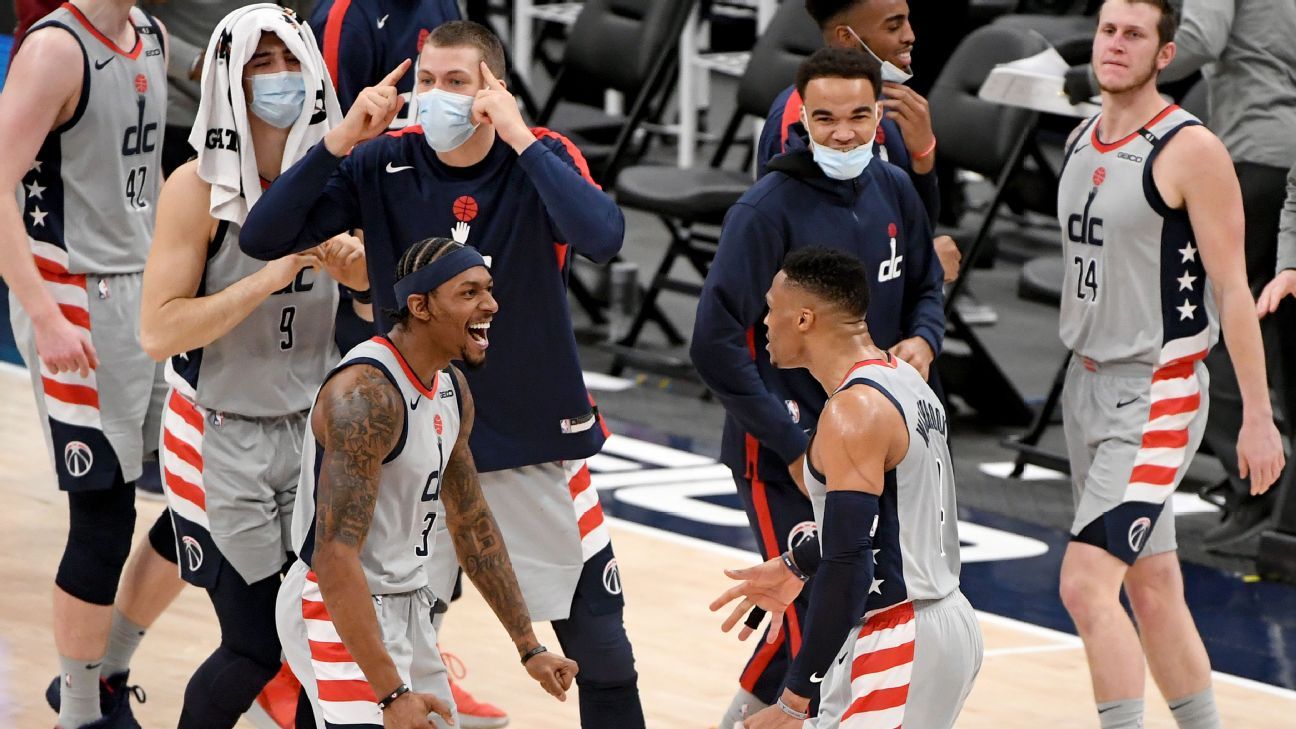 Russell Westbrook and Bradley Beal rattled off a quick six points in a stunning 3.8-second sequence that propelled the Washington Wizards to a 149-146 comeback win over the Brooklyn Nets on Sunday night.

“At this time, we don’t have nothing to lose,” Westbrook said. “It’s win or go home.”

The Wizards, down by five points with the shot clock turned off, had seemed to be on their way to a fifth straight loss.

“Honestly, Ish (Smith) just told me to push it and pull it,” Beal said after the game. “That is all we could have done in that situation.”

Beal sprinted up the court and pulled up to nail a 3-pointer that brought Washington within two points of Brooklyn with 8.1 seconds remaining. As Nets forward Joe Harris went to quickly inbound the ball at the baseline, teammate Kevin Durant cut toward the basket. The miscommunication allowed Wizards guard Garrison Mathews to steal the ball in the corner and dish it out to Westbrook, who buried another 3 with 4.3 seconds to play.

With the Wizards clinging to a one-point lead, the Nets took a timeout. When play resumed, Nets guard Timothe Luwawu-Cabarrot managed to get a good look at a layup in the final two seconds of the game, but his attempt rolled off the rim.

“We had that game,” Nets guard Kyrie Irving said. “It should’ve been ours, so we just look at ourselves in the mirror and see what we can correct as individuals and as a group — especially on effort. I couldn’t guard a stick today. Those guys were just going right around me, and I was getting frustrated a little bit.”

The Nets led by as many as 18 points at Capital One Arena and had three 25-point scorers in Harris, Irving and Durant. The Wizards and Nets’ combined 295 points was the second-highest-scoring non-overtime game in the past 25 seasons, according to ESPN Stats & Information research.

“It was the first game all year I had a White Claw,” Wizards coach Scott Brooks said. “I wanted to enjoy it. This is a good feeling. I wanted our players to enjoy it. We fought. We fought hard. … We’ve done it all year, and the basketball gods gave us a break tonight.”

The Nets’ defensive issues allowed the Wizards to stay in the game. While the final sequence of the game appeared to be the apex of the Nets’ breakdown, Irving said that Harris’ turnover and the subsequent 3 were a “microcosm” of the issues that plagued Brooklyn all night.

“It doesn’t come out of one play,” Harris added. “But same time I mean, had I not made (the turnover), we wouldn’t be sitting here talking about loss.”

Nets coach Steve Nash called Harris’ turnover “an unfortunate moment” but said it wasn’t to blame for the loss.

“When you give up 149 points, that’s one error in about 50 defensive lapses,” Nash said. “So not good enough defensively, and we can look at the missed layup or the turnover for the 3 there, but we shouldn’t have been in that position. We had a big lead early, and we let them stay around a long, long time until their confidence grew. They’re a desperate (group) looking for a win, and we gave them a chance and gave them life.”

For Durant, “This is one of the ones you’ve just got to get rid of.”

Leonard, George nearing return for Clippers
3 teams that should be calling the Knicks about Cam Reddish
This Steph Curry video will blow your mind
Michael Jordan decade-long grudge against Charles Barkley explained
The Whiteboard: Breaking down the race for the NBA scoring crown