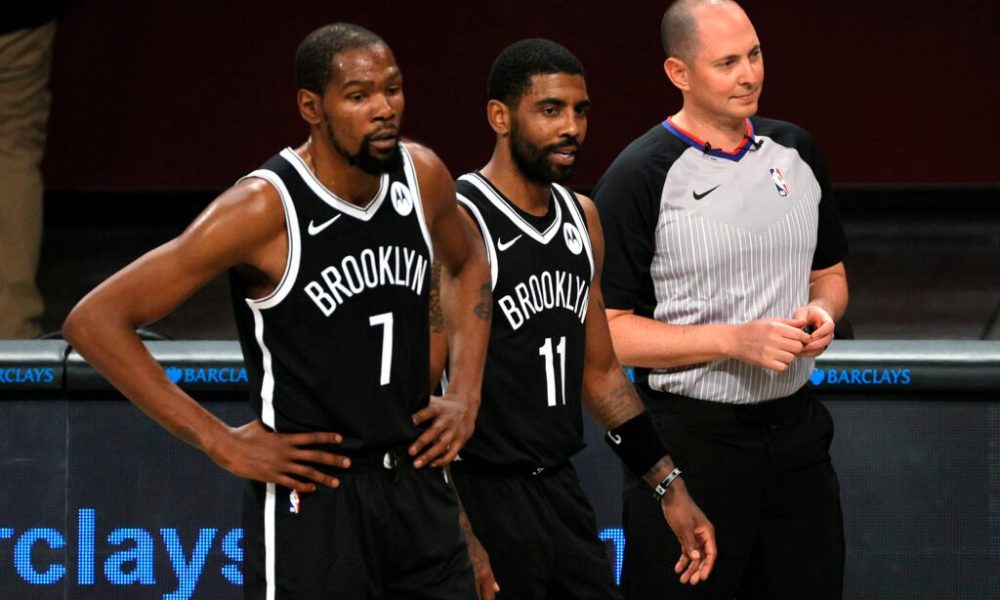 During the 2000-01 NBA season, the Los Angeles Lakers, led by Kobe Bryant and Shaquille O’Neal, finished 22nd in the league for defensive rating. They went on to win the championship, and are still the only team this century to finish outside the top 10 in defensive rating and win a title.

One key caveat for that Lakers team is that they were a quintessential on-off switch team. Ultimately, that switch was stuck in an off position as the veteran group coasted through its title defense campaign. Famously, the switch was emphatically flipped on in the playoffs as head coach Phil Jackson’s team led all 16 playoff squads in defensive rating en route to a 16-1 rampage.

20 years later, the Brooklyn Nets have assembled a frightening collection of offensive talent. The trio of Kevin Durant, James Harden and Kyrie Irving has been nearly an unstoppable force in its short time together. Durant’s mid-range pull-up game remains an outlier in NBA history in terms of effectiveness, as does Harden’s step-back three and a knack for drawing fouls. Irving’s artistry in isolation has only been rivaled by the Jean-Michel Basquiat-inspired court he calls home.

With those three playing at that level, the Nets should be a clear-cut title favorite. Yet there is understandable trepidation due to the other half of the game.

The Nets currently rank 23rd in defensive rating, and that number is even worse if you filter it since the team traded for Harden and lost an interior presence in Jarrett Allen. The alarm bells rang their loudest when the Nets gave up 149 points, including 48 in the fourth quarter, during that sloppy loss to the Washington Wizards.

Going back to the turn of the century, that Lakers team had solid defenders up and down the roster. While effort has been an issue for this Nets team, their defensive talent extends about as far as Kevin Durant’s wingspan.

Can this team as currently constructed climb to the middle of the pack defensively? It’s tough to say, given the evidence at this point, but there have been a couple of encouraging signs.

Using Cleaning the Glass, the Nets’ worst defensive performances have come against the league’s bottom-feeders. In that shootout against the Wizards, they allowed Bradley Beal and co. to post a 130.9 offensive rating, good for 18 full points above their current mark for the season. The game before that, they allowed the Oklahoma City Thunder to score about 117 points per 100 possessions, up from their 27th ranked 105.6 number for the season.

Meanwhile, they have held up a little better against tougher competition. In their games against the league’s two best offensives, the Milwaukee Bucks and Los Angeles Clippers, the Nets kept those teams right around their average offensive rating for the season. Those numbers hint that poor effort is certainly a factor.

The most frequently used lineups since the Harden trade has held up moderately well. The small-ball lineup of Irving, Harden, Joe Harris, Durant and Jeff Green has posted a 110.3 defensive rating. The more traditional lineup with DeAndre Jordan in Green’s spot boasts a 108.0 number, per Cleaning the Glass. Better, both of those numbers hover around league-average.

The real issues have come when the team goes to its bench. The Nets particularly lack any depth behind Jordan in the frontcourt. Reggie Perry, usually the backup center, was cut out of the rotation against the Clippers – and more recently assigned to the G League affiliate – as the team went exclusively with either a small-ball unit or Jordan at center.

Due to the personnel, the Nets’ defense has relied on a lot of switching when defending both on and off-ball screens. This scheme requires strict attention to detail and can look stout when the team is in sync but leads to very easy attempts for the opposition when a single mistake is made.

Against the Miami HEAT, in what was likely the Nets’ best defensive performance of the season, the group executed these switches well. Here Durant, Green and Bruce Brown perfectly coordinate a three-way switch against a Miami set play, leading to a Brown steal.

Switching constantly can mitigate the Nets’ biggest weakness, interior defense. It can also lead to miscommunications and mismatches that opponents can hunt.

When the focus isn’t there, a blown switch leads to a wide-open layup or three. Against the Wizards, these mistakes were frequent. Here, based on the reaction after the play, it looks like Durant fails to signal the switch on a pin down for Davis Bertans, concluding in a three and the foul.

The Nets also failed to communicate on this Mo Wagner screen-and-roll with Beal, ending up with a wide-open dunk for the big German.

Switching also can allow teams with great scorers to hunt favorable matchups. This was in full display against the Clippers when Paul George and Kawhi Leonard sought out isolations against Irving and Harris.

On the first play of the game, Leonard gets the switch to Irving. The Brooklyn defense shrinks to help on the potential Leonard drive, leaving Nicolas Batum wide-open for three.

While those downsides are less than ideal, the Nets have shown an ability to outweigh them with solid play when engaged. In the same quarter of that game, Durant and Irving do a great job re-switching to get Durant back to Leonard. The two-time Finals MVP makes a great shot, but the defense was solid.

But when Jordan is in the game, the Nets are forced to rely on more drop coverage. This is when the player guarding the screener drops back into the paint as the guard fights over the screen.

The results have been mixed. Brown is feisty, but the Nets do not have many options when they need to defend smaller guards. If the defender tasked with the guard lags over the screen, Jordan will be defending a 1-on-2 in the paint.

The Bucks attacked this coverage repeatedly using Jordan’s man, Giannis Antetokounmpo, as a screener. The Nets held up well, especially when the right defenders were tasked with the play. Here Durant slithers over the screen and makes a great contest from behind to alter the shot, but Brooklyn was unable to secure the rebound.

The issues with this coverage can come when a team with solid guards attack the Nets’ weak links on the perimeter. Below, the Bucks have a favorable matchup with Jrue Holiday guarded by Harden. Harden fails to stay attached over the screen, resulting in Holiday drawing out Jordan and finding Antetokounmpo for a dunk.

While these issues can be attributed to the roster, some of this can also be blamed on the lack of practice time for this group. Newcomer Steve Nash seems to be switching between different schemes on a quarter-to-quarter basis. The experimentation is a conscious choice, of course, as the Nets would rather be making these mistakes in February than in May.

Another encouraging sign for Brooklyn is their transition defense and rebounding, two necessary fundamentals for a good team. They have been right around league-average in rebounding and even slightly above average in transition defense since the Harden trade, per Cleaning the Glass. The old adage that the best defense is a good offense rings true here, as the Nets keep opponents out of transition by simply making shots.

It’ll be interesting to see how the Nets continue to grow as a defensive unit as the season goes on. They have yet to play a true post-up threat that will test their biggest weakness, which comes in the form of Joel Embiid on Saturday.

It is likely they also grab another interior presence via trade or buyout, and they will certainly be interested in the services of someone like PJ Tucker should he be available.

For now, the team will continue to learn through trial and error – really, it is the only option. The effort will come and go in this truncated season, but the key is the ceiling this team can reach when fully engaged. While there are too many weak links on the roster to construct a great defense, an average one paired with a historically great offense could be enough to reach the top of the mountain.