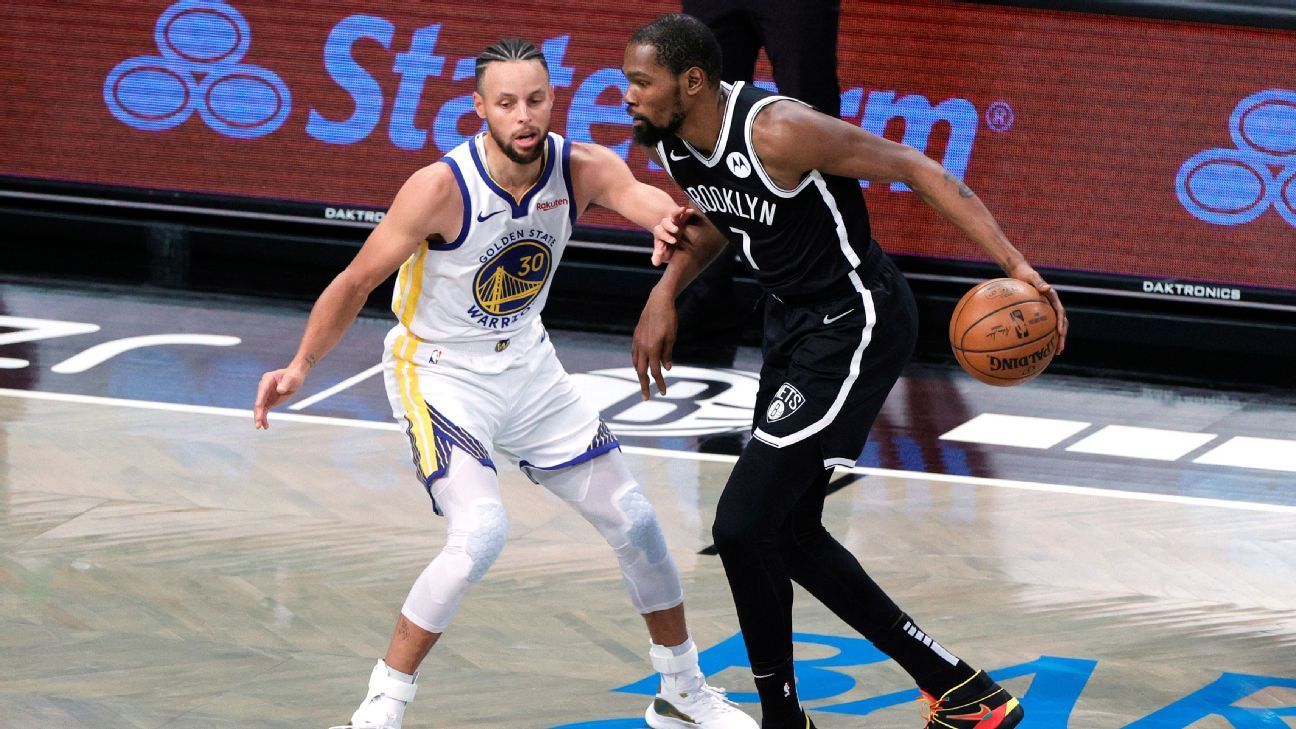 Inside the Golden State Warriors‘ practice facility in Oakland, California, Kevin Durant sat at the podium and responded to the first question of the 2018-19 season: How would he handle all the attention focused on his looming free agency that coming offseason?

“Wake up in the morning, come to practice and go home,” Durant said.

The tenor of the defending champions’ final season in the Bay Area was set.

Durant didn’t want the focus to be on his impending decision — yet his deal that included a player option in 2019-2020 made it difficult to avoid speculation. It was speculation that the other Warriors stars quashed: Stephen Curry signed a $201 million, five-year max extension in 2017, and Draymond Green was in the midst of a five-year, $85 million extension. And while Klay Thompson was also set to become a free agent at season’s end, there was never a question about whether he’d leave.

“It’s one of those things where you’re just confident in your skills and you just kind of want to take it year by year,” Durant said then. “And I think to keep my options up, it was the best thing for me. …

“This whole year is going to be a fun, exciting year for us all, and I’m looking forward to just focusing on that, and we’ll see what happens after the year.”

As hard as Durant and the Warriors tried to keep the focus on what they were doing on the floor, the uncertainty surrounding his free-agency decision hovered over everything the organization did in that final season — all through the regular season, all through the postseason and, ultimately, through the unraveling in the Finals as both Durant and Thompson fell to injuries.

Now a member of the Brooklyn Nets, Durant is set to face the Warriors for the first time at Chase Center (8:30 p.m. ET on ABC) in San Francisco. Here is a look back at the final year of his Warriors tenure and the fraying of the Golden State dynasty — through the words of Durant and the Warriors.

Durant: “My imagination is going wild right now with possibilities.”

Shaun Livingston: “Guys wanted a different outcome than what happened. Obviously, Dray had the turnover; guys might have thought they were open or wanted the basketball, didn’t get it. Things happen like that in sports. But it was good to see some fire, some emotion.”

Green, via Uninterrupted on April 20, 2020: “[Durant’s contract] was kind of the elephant in the room, and although [coach] Steve [Kerr] would kind of hit on it, [saying], ‘Let’s just enjoy this year for what it is because we don’t know what next year holds,’ it didn’t necessarily carry the same weight because what should have happened was Kevin come out and say, ‘Hey, man, this is it, so let’s do this,’ or, ‘This isn’t it.'”

Kerr, on Nov. 13, 2018: “Nobody ever talks about Kevin’s free agency. It doesn’t bother any of us. This is the NBA. There’s guys either under contract, they’re upcoming free agents. It’s the business. We’re focused on this year.”

Durant: “I have nothing to do with the Knicks. I don’t know who traded [Kristaps] Porzingis. They got nothing to do with me. I’m trying to play basketball. Y’all come in here every day, ask me about free agency, ask my teammates, my coaches. You rile up the fans about it. Let us play basketball. That’s all I’m saying. And now when I don’t wanna talk to y’all, it’s a problem with me. I just don’t trust none of y’all. Every time I say something, it’s getting twisted up and thrown out and in so many different publications, trying to tear me down with my words that I say. So when I don’t say nothing, it’s a problem. I just wanna play ball. I wanna go to the gym and go home. That’s all. Is that a problem? All right then.”

Kerr, Feb. 8, 2019: “We’re all actors in a soap opera. We really are. So we have to deal with that part of it. And also understand that that’s a big part of the revenue stream. The intense interest and passion that fans have for who’s going where, what team’s doing what. It’d be nice if everyone could just pay attention to pick-and-roll coverage, but gossip is more interesting sometimes.”

Andre Iguodala, April 4, 2019: “It’s something all the time. And especially with how there’s a microscope on [us], it’s always something. So I wouldn’t say this year is anymore than last year. All it is is just chatter. It’s more chatter about the future. And I think we’ve done a good job of not letting it seep inside.”

Kerr: “There’s going to be finger-pointing, and we understand that. And we accept that. This is kind of what you sign up for when you get into coaching, general management in the NBA. There’s all kinds of coverage, judgment, criticism, and it’s all part of it, so we accept that. The main thing is our concern for Kevin and these last couple of days just checking on him. Obviously, everybody feels horrible for what happened.”

General manager Bob Myers: “[Durant is] one of the most misunderstood people. He’s a good teammate, he’s a good person. It’s not fair.”

Owner Joe Lacob: “Today, as he starts a new chapter in his incredible career, we thank KD for all of his contributions, for being an integral part to one of the most prolific runs in NBA history and wish him well as he continues his Hall of Fame journey. As long as I am Co-Chairman of this team, no player will ever wear #35 for the Warriors again.”

Want to forecast where your favorite NBA stars could wind up? Create your own deals with ESPN’s Trade Machine.

Durant, on ESPN’s First Take on Oct. 31, 2019: “I felt like a lot of stuff in Golden State had reared its head. I felt like it was going to be the end no matter what, especially for that group. Shaun Livingston was retiring. Andre Iguodala was getting older. Our contracts were going to start for the team and put us in a hole to get other players. It was time for all of us to separate.”

Kerr, on Sept. 30, 2019: “We want to maintain the culture that we’ve built, but we want to make sure our players are put in the best position to succeed. And the last four years we pretty much knew exactly what that meant. We don’t really know what it means this year. So that’s why we have a lot of work ahead, but it’s exciting, I’m looking forward to it.

KD, Warriors share insight on the end of an era:

Durant, via the Wall Street Journal on Sept. 10, 2019: “As time went on, I started to realize I’m just different from the rest of the guys. It’s not a bad thing. Just my circumstances and how I came up in the league. And on top of that, the media always looked at it like KD and the Warriors. So it’s like nobody could get a full acceptance of me there. … I came in there wanting to be part of a group, wanting to be part of a family, and definitely felt accepted. But I’ll never be one of those guys.”

Kerr, via All the Smoke on Oct. 15, 2020: “We all had a sense that Kevin was probably looking to move on and take on a new challenge. … You helped bring us two championships and almost another one. And you brought an incredible amount of joy to Oracle every night, and our fans got to watch one of the best basketball teams on earth. My feeling was, ‘Thank you and good luck and get healthy.'”

Kerr: “I didn’t know what to expect given that it’s been really a year and a half since his last game. But I could not tell one difference between seeing him 18 months ago and seeing him the other night.”

Durant, on Dec. 21, 2020: “I don’t need this game or for me to play well or win this game to feel like I have closure on that situation. If winning a basketball game is gonna give me closure for three years, then I really didn’t have a good time there, I guess.”

Kerr, on Feb 8: “When we played Brooklyn on opening night, I talked to Klay a few days later. We talked about how great Kevin looked and how inspiring that was. And Klay noticed, and he definitely feels good about watching Kevin and his performance and how well he’s playing and how good he looks physically.”