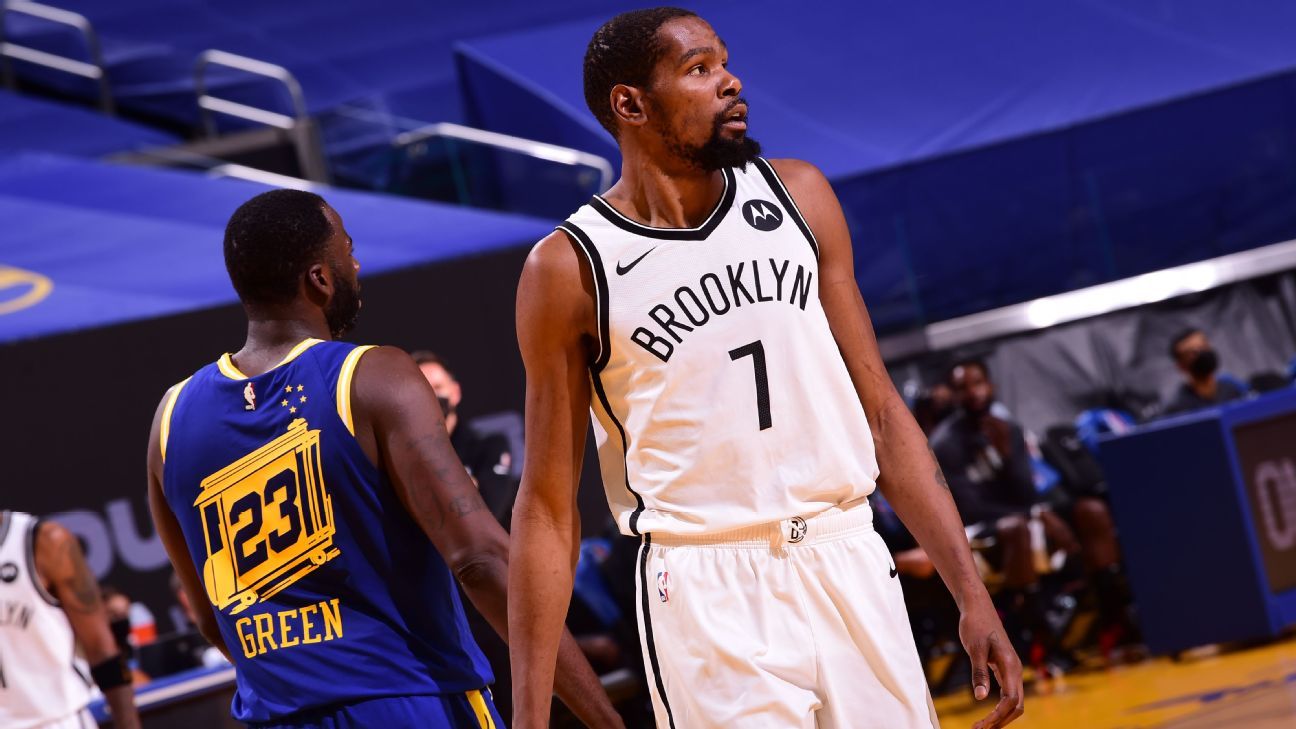 The Brooklyn Nets annihilated the Warriors in Kevin Durant‘s return to the Bay Area on Saturday night, defeating Golden State 134-117.

Before the game, Nets coach Steve Nash said that while he believes this game against his former team carries extra weight for Durant, the former league MVP hasn’t shown it.

“We haven’t talked about it,” Nash said. “If there’s ever a comeback game that is less than what it may have been in a normal situation, it’s this one where we have no fans, it’s getting closer to two years from his last game here. So it’s not gonna have the same — I don’t think — rawness that sometimes these games can present; but I still think it means something to him.”

Durant, who played for the Warriors for three seasons, finished with 20 points. James Harden added 19 points and 16 assists. Kyrie Irving led the way in scoring for Brooklyn with 23 points. All five of the Nets starters finished in double figures.

During a first-quarter timeout, a tribute video played on the jumbotron in Chase Center, thanking Durant for his tenure in Golden State. During his three years with the Warriors, the team won two NBA championships and Durant was named Finals MVP twice.

A team spokesman said the Warriors intend to play another thank you video for Durant next season when the team plans on having fans in back in the arena.

After building a 15-point halftime lead, a 42-point third quarter propelled the Nets to a 108-82 lead entering the final quarter. Their 26-point advantage was the Nets’ second largest lead of the season through three quarters, according to ESPN Stats & Information research.

The Nets’ largest lead heading into the fourth quarter this season was also against the Warriors, when the team led by 28 on opening night in Brooklyn.

The Nets ‘Big Three’ of Harden, Durant and Irving scored or assisted on 100 of Brooklyn’s points.

As Durant walked off the court, he gave hugs and handshakes to former teammates and Warriors coaches.

76ers fans welcomed Ben Simmons back to Philly exactly how you’d expect (Video)
Luka praises Tatum-Brown as ‘best duo’ in NBA
NBA ref Kennedy: ‘Hideous hate crimes’ must stop
Notable trainer arrested in R.I. on rape warrant
For the struggling 76ers, it might get worse before it gets better