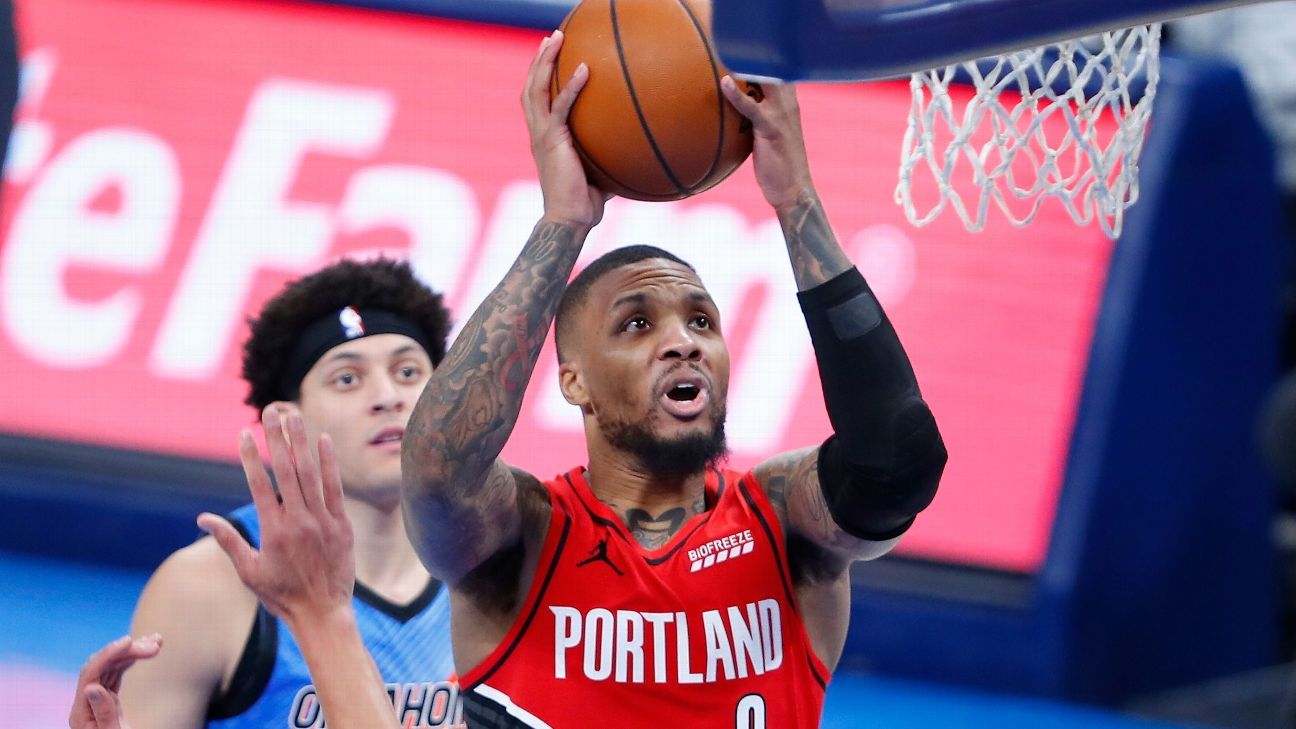 OKLAHOMA CITY – With 5:28 remaining in the fourth quarter, Damian Lillard hit two hard dribbles with his left hand, putting his man on his hip and squaring up the help defender, Al Horford.

It was a one-point game, the Oklahoma City Thunder leading, and as Lillard does, he hit the eject button to rise and fire in Horford’s face, the kind of shot the Dame Time mythology is built on.

The problem was, to that point he was 1-of-9 from 3-point distance. It wasn’t a typical Lillard game, with the flurry of logo shots and dazzling rim finishes. He was short, he was off left, he was off right. And this one over Horford, this one missed badly short and left.

Lillard has buoyed the battered Blazers the past month behind these moments, carrying the burden of clutch-time on his shoulders, while trying to bring along young talent like Anfernee Simons, Gary Trent Jr. and Nassir Little. But the big spots, the crunch-time shots, those belong to Lillard.

But with frigid air in Oklahoma cool to the point the state was dealing with an energy emergency, with basically every light in the arena turned off but the ones to illuminate the floor, Lillard was ice-cold. And not in the good way.

The Thunder, as they have done often in this season, scrapped with their young players, hanging in the game long enough for energy and athleticism to wear down an opponent. Hamidou Diallo was springing all over the floor; Lu Dort was snow-plowing his way to the rim. A 20-point Blazer lead turned to a five-point deficit with four minutes to go. It was getting to a now-or-never point for Dame Time.

“There’s concern,” Lillard admitted. He said he looked at the scoreboard when the Blazers’ lead was down to 93-84, hoping his team could hit two quick 3s, calm the Thunder’s run down and that he’d take the controls for an easy landing.

“I never think there’s a game that I can’t take control of,” he said. “When I’m out there, I feel how hard the defense is trying to stop me. When I see how alert and how active they are trying to stop me, it just lets me know they’re concerned. They’re concerned regardless of how well or how badly I’m shooting the ball. And for me, it’s even more of a mental thing for me that even though they know I’m not hot, they’re still worried and I want to show them why they should be worried. And why they should still be on edge.”

Enes Kanter comments on Damian Lillard’s amazing play, saying he has never seen anything like it before.

His first late-game 3 came at the 4:11 mark, with Dort flying by him on a pump fake. Lillard took a dribble and calmly drained it. The Thunder’s lead went back down to two and it ended a 23-4 run that OKC had opened the fourth quarter with. With the Thunder now on high alert, he set Trent up for a corner 3 on the next trip and the Blazers had the lead back.

The next possession, Lillard worked to shake Dort off him and force a switch. He tilted back into a quick release over Isaiah Roby and hit the bottom of the net. A few possessions later, Lillard had Dort in isolation. A dogged defender who had worked tirelessly to hound Lillard, Dort stayed with every jab, every deke, every fake. With the shot clock winding down, Lillard went behind his back and took a big step back to rock into a 3 with a little extra lean and a little extra arc because of the stellar defense. Didn’t matter — it was Dame Time. Two trips later, Lillard hit one more for the official dagger to give the Blazers a fifth straight win, 115-104 over OKC.

The Dame Time mentality is one that has been well chronicled, with Lillard answering questions about it since his first famous clutch shot dropped, back in 2014 to eliminate the Houston Rockets. But he revealed Tuesday part of unlocking the mindset to embrace big moments is in his own personal mind-game with himself.

The attentiveness of defenders, the fear he hears in assistant coaches’ voices pleading with players to stay up on him, they can serve as an injection of confidence for Lillard even when the shot isn’t falling.

“It’s encouraging in those moments,” Lillard said. “Sometimes I come up short. Sometimes they do well enough or the shots don’t go in, but in those moments I’m telling myself that when they walk off the court maybe they’ll go back and say, ‘This is why we wanted you to do it, so it wouldn’t happen to us.’ I want to do that to the opposing team.”

He doesn’t remember exactly when he started playing those mindgames with himself — maybe his second season, he guessed — and didn’t really have an explanation for how he takes himself to that place mentally to turn it on.

“It’s internal,” he said. “You just demand it. You just demand that something extra of yourself. There’s nothing that comes from [Blazers head] coach [Terry] Stotts, there’s nothing that comes from [NBA Development Coach] Phil Beckner, none of that. It’s just on the inside, I’m like, ‘I have to find a way.’ This is an opportunity to rise and to come up big.”

Late in the third quarter, Lillard bumped knees with Dort and took an extended amount of time trying to walk it off. The Blazers took a foul so he could get it checked on the bench, and even after getting the all-clear to return, Lillard watched while intermittently rubbing and flexing his knee. It was a brief moment of terror for the Blazers, who have already dealt with a wave of attrition. That attrition has given some of their young players opportunities to develop, which may benefit the long run, but as last postseason showed, with no Lillard, there is no Dame Time, which means there are no Blazers.

It’s why he accepts and understands the responsibility he holds, especially without backcourt closer CJ McCollum. And even on a night where it wasn’t happening, Lillard’s inner voice kept talking to him, telling him there was an opportunity for a moment.

Ice cold. In the good way.