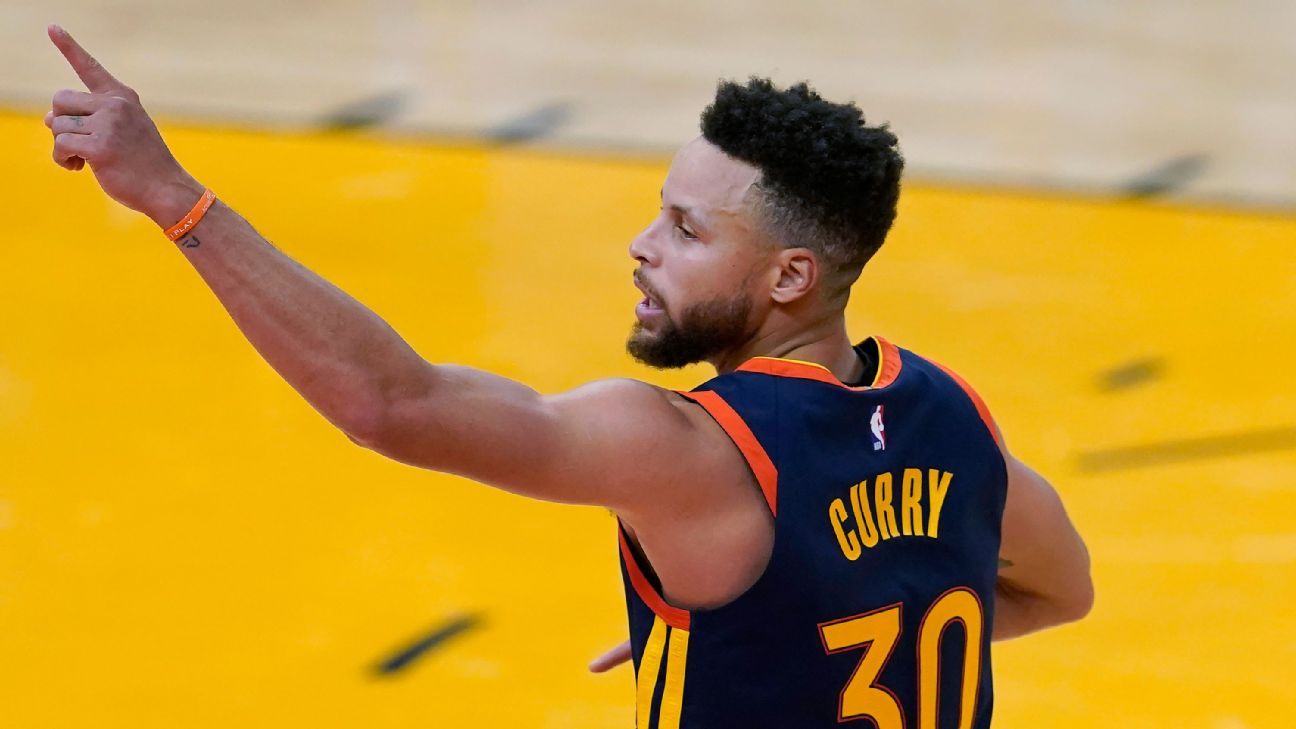 After spending the first half of the season full of knocking down shots from all over the floor, while re-inserting himself into the MVP conversation, Curry came into the fourth quarter of Wednesday night’s 120-112 overtime win over the Miami Heat having already set a personal record for most three-pointers missed in a game. Curry had already had 47 games in his career where he missed at least 15 threes according to ESPN Stats and Information, but this was the first time he had made just two of them. The rhythm that had defined his season was missing — but as has been the case throughout his career, Curry still found a way to hit the biggest shots of the night when it mattered the most. The star guard’s crucial 28-foot step-back three late in regulation and eight points in overtime helped the Warriors come all the way back from a 19-point deficit and earn arguably their most impressive win of the year.

“That’s why he’s great,” Warriors swingman Andrew Wiggins said. “That’s why he’s one of the greatest players to play the game of basketball. The ability to have a rough first half but come out with that same mindset and take over the ballgame when it needs to be taken over and make big shots after big shots down the stretch. That’s why he is who he is.”

On a night when the Warriors played without emotional leader Draymond Green, who was scratched just minutes before the game because of an ankle injury, and had to overcome the continued absence of James Wiseman (wrist) and Kevon Looney (ankle), it was Curry who repeatedly made the big plays in the biggest moments — even after missing so many shots to start the game.

“I probably took five bad ones,” Curry said. “I’d say, the rest of them were off the dribble in rhythm or catch and shoot wide-open, I just was missing. So knowledge and confidence is huge, and understanding that eventually I’ll find the right rhythm, the right look and make a big one. And thankfully it happened at the end of regulation and then in the two in overtime. I tried not to think of the percentages during the game when you know like ‘Damn, I missed about 17 of these.’ That doubt can sometimes creep in, you got to kick it out and just shoot with confidence and keep shooting.”

His ability to shoot terribly but still be able to turn the game around didn’t come as a surprise to anyone who has watched him perform for years.

“This is so typical of Steph,” Warriors coach Steve Kerr said. “He’s just the kind of player and the kind of person who can be in the midst of one of his worst shooting nights of the year and still hit three enormous shots to help us win the game. So really an amazing team win and a lot of fun.”

Curry’s ability to get hot at the right time has been a staple of the Warriors entertaining season and is a huge reason why the organization has confidence that it can win games no matter who else is on the floor. No matter how many he misses, they trust that he will make the one that matters the most.

“When you’ve got a guy like that that believes in you and instills that confidence in you, you feel like you can do anything,” Warriors guard Kent Bazemore said after scoring 26 points. “That’s just who he is. He always thinks less of himself and he’s always looking to elevate those around him and it’s been great. He’s instilled confidence in a ton of players in the locker room, throughout their ups and downs … it’s a great leader to have.”

The fact that Curry won the game after playing a season-high 42 minutes made the win that much sweeter for a team that starts a four-game East Coast swing on Friday in Orlando. Curry’s late run offered another reminder of how overwhelming his talent can be to opponents. His shots mentally toppled a Heat team that is used to making other teams wilt over time.

“I just think he hasn’t just built up his body and his skill over the years,” Kerr explained. “I think he’s built up his mind. And he’s so strong-willed that he doesn’t let things bother him and he knows that the law of averages are going to play out. He has so much belief in his shot that he’s going to keep shooting. It’s the same reason he shoots three-quarter court shots when there’s still time on the clock. He doesn’t care about the percentage. He actually believes that’s a shot he can make, so he takes it. And same thing applies when he’s in the midst of a tough night, he always believes the next one is going in. He’s got an incredibly powerful belief in himself.”

No matter how poorly things started in the beginning, Curry never doubted that he would be able to turn things around. He trusts the work he puts into his game — and that filters all the way through the rest of the Warriors roster.

“You play enough games and go through enough experiences, you know what it’s like to kind of feel a little lost when shots aren’t falling,” Curry said. “And you know how you mentally react to it and what you can do to keep your confidence and stick with it … it’s just bread over time … I’ve been shooting since I was nine. You got to be able to figure out how to get through some bad shooting games.”

Kawhi, PG traveling for road trip but out vs. Kings
Knicks say forward Toppin to miss 2-3 weeks
Morant fined $35K for jawing at ref during game
NBA Power Rankings: Are the Lakers and Nets finding their rhythm?
Harden returns for 76ers after 14-game absence