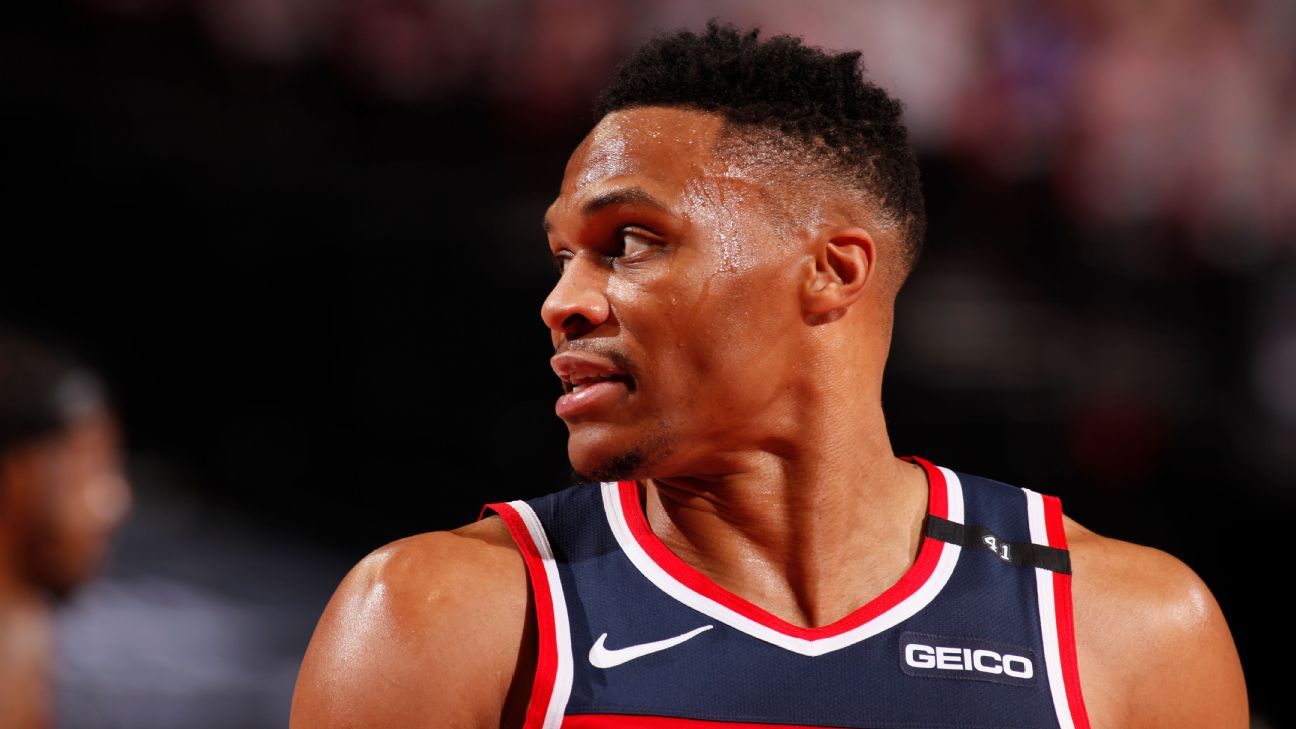 In the Washington Wizards locker room, coach Scott Brooks stood at the front of the room, acknowledging players for their impact on a big win in Portland.

He started with Isaac Bonga, who played only five minutes, but was a plus-five in the box score.

“Those five minutes were huge,” Brooks said. He moved on to Rui Hachimura, calling him a “difference-maker” the last two weeks, with his defensive versatility.

He brought it in for a huddle, and there was some standard joyful commotion, but then a brief pause. There was an understanding someone else had the floor, as he does after every game when he wants it.

The broke the huddle with “family” on three and with it, the Wizards walked out of the Moda Center with a fourth straight win, beating the Portland Trail Blazers 118-111, showing signs of straightening out their wobbly start to the season.

Westbrook played maybe his best game of the season, scoring an efficient 27 points, adding 11 rebounds and 13 assists for his eighth triple-double of the season. Which puts him second all-time in triple-doubles in Wizards franchise history — already — passing John Wall and Wes Unseld, and only behind Darrell Walker (15). Bradley Beal scored 37 points, Hachimura added 17, Davis Bertans hit some 3s, and the Wizards looked like a good team.

It has been a choppy season for the Wizards, with the league’s health and safety protocols disrupting them for weeks as the team dealt with a COVID outbreak and contact tracing. There have been injuries, big and small. There have been excruciating losses. There have been significant embarrassments.

After trading John Wall for Westbrook before the season, there was optimism that the former MVP’s leadership and intensity could transform the young Wizards and elevate them into a sturdy Eastern Conference playoff team. And Brooks maintained for weeks, despite the frustrating lows, that the Wizards were on the verge of breaking through.

What was going unsaid, though, was the Wizards needed Westbrook to rediscover his elite level to do so. A quad injury sidelined him for weeks in early January, and the lost games and practices the team was dealing with kept the rust on his game. Westbrook is a known rhythm player, needing games to work out issues. The more he plays, the sharper things get. His handle is tighter. His jumper is softer. His decision-making is better. His finishing is stronger.

“He’s getting in a rhythm. He’s going to have more games like this,” Brooks said. “The guy’s a championship player. How he prepares. How he talks to our guys. He forces the team to be ready.”

But at 32 years old, Westbrook had to take a different approach to his recovery. It was a slow process, something that required an adjustment.

“To start the year, I was debating, and it was a difficult spot for me honestly, because I don’t like to let my teammates down. I want to make sure that I’m available for them, even if I’m not 100 percent,” he said. “And that’s just something I’ve always done. It’s probably not the best thing to do, but honestly as I’ve gotten older, I’ve had to stop. I’ve had to stop because I wasn’t able to explode and move the way I needed to.”

There were moments where the questions were being asked about him, the ones that have long been anticipated. There were alarming signs of washedness. He looked a step slower and the electricity wasn’t turning on. The ferocity wasn’t the same. But, Westbrook said, that was just because he was trying to play a longer game for once.

“Now I’m feeling a lot better,” he continued. “I’m able to move around and explode and get by people and make an impact on the game on both sides of the floor and as the season goes along I’ll keep getting better. I’m not worried about that one bit.”

Westbrook has spent 12 seasons playing exceptionally hard, and doing it with the kind of night-to-night consistency few players are equipped to handle. There are a lot of miles on him, and knee procedures to go with it. His style is to disregard personal safety within the confines of 48 minutes, never spending a moment fretting about the future, instead only focusing on the here and now. His approach is what has made him into an NBA legend. But it’s also what he will spend the twilight of his career battling against.

After the Wizards beat the Nets a few weeks ago in the wild comeback in the final five seconds, Brooks was blunt about the different process Westbrook has gone through this season. Westbrook’s instant trampoline ability was always something Brooks marveled at, and Billy Donovan after that, how the point guard could seemingly roll out of bed, crank the energy to 10 and blast off for dunks. It was the same way he approached injury recovery, playing through almost any small ding, and taking on the bigger stuff with a ferociousness that had him coming back early from knee surgeries, playing with a dent in his face, and dealing with ligament tears in his hand.

“He didn’t do that this time,” Brooks said a few weeks ago, after the Wizards shocked the Nets on Westbrook’s wild 3. “Which I’m glad, because he’s an old man now.”

What Westbrook wanted in a trade out of Houston was to get back to his now-I-do-what-want ways, leading a team on and off the floor. He wanted to bring his immense gravitational pull to a new locker room and for a team to take on his intense identity. He wanted to play his way and not worry about analytical equations. In desperate need of a culture refresh, the Wizards wanted it too.

“He has set the tone. Our guys are much more in tune how to prepare to win a game,” Brooks said. “He’s led us so many ways I don’t even want to get into. Our players know it. Ask any player on this team. They know he means business. This is not a hobby for him. A lot of times in this league, people look at it as a hobby. It’s fun, we get to do something we love. I get that. But it’s still your job, your livelihood, how you represent your organization, your city, your family, your coaches. And Russell does that at the highest level I’ve seen.

“He’s given us a pathway to how to be a championship level [team],” Brooks added. “Our young guys need it. Sometimes they don’t understand how hard he is on them, but they’re going to realize it in years to come that that’s how you start your career off the right way by being around good players.”

Beal is set to start the All-Star Game and gives credit to Westbrook for helping push him to be better. Westbrook has a long history of playing alongside high level talent and on top of it, elevating them. He helped Kevin Durant win four scoring titles and an MVP. Paul George played the best season of his career with Westbrook. And alongside Beal, Westbrook recognizes his place as a complementary star, stepping aside to let his teammate cook, but also imparting his will when necessary.

“My job is to make sure to continue to push him and bring the best out of him every night,” Westbrook said of Beal.

Westbrook has never been a model of consistency. His recklessness is part of his skill, a basketball renegade willing to take on the burden of failure. But what he needs is for his motor to run at top gear, even if the oil needs changing a little more often.

“I don’t see the ups and downs that you’re stating. I see his shot go up and down,” Brooks said, “but his game is not based on making and missing shots. It’s based on leading us.”