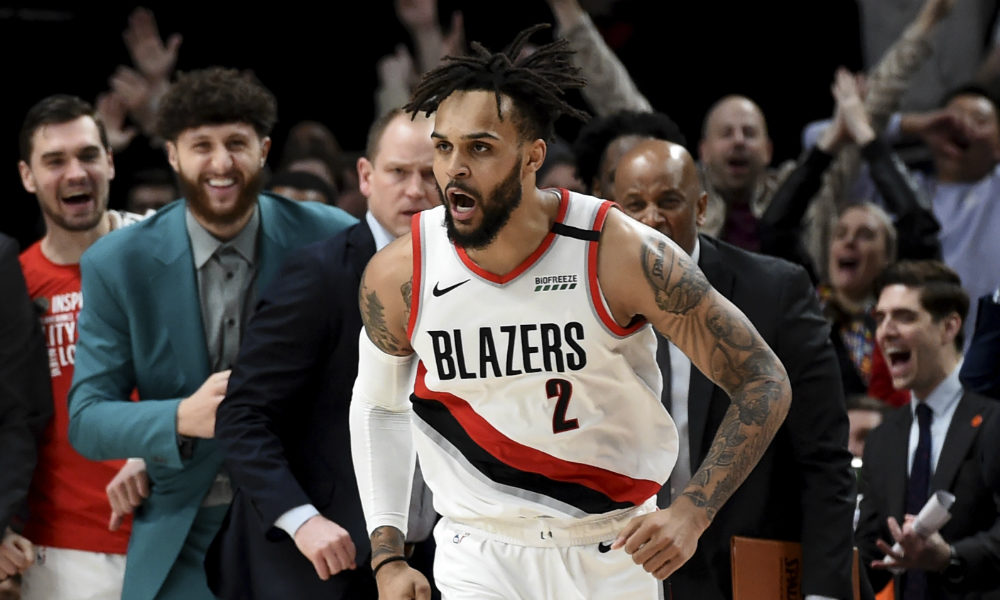 With apologies to Immanuel Quickley, Anthony Edwards, Saddiq Bey and a few others, the league’s best rookie is a two-man race. Tyrese Haliburton and LaMelo Ball have staked their claim at the top of the rookie ladder and both show no signs of relinquishing.

The two young guards are helping to elevate a mediocre draft class, both showing a precocious ability for their respective teams. While they play similar positions, their games are nearly polar opposites.

Ball thrives in chaos, sometimes even creating that chaos himself to gain advantages for his team. His size and vision make him a weapon in transition and he has a knack for turning a loose ball scramble into a positive play.

He will often make decisions on the fly rather than planning things out, relying on his incredible instincts. Below, he slips a screen, draws two defenders as he goes to the rim and makes the last-second call to drop it off to PJ Washington just before he travels.

Haliburton creates structure, filling in gaps and connecting dots for a team that has desperately needed that kind of consistent presence. Watching Haliburton play, you’ll see a surprising amount of orchestration for a rookie. Where Ball sniffs out opportunities seemingly out of nowhere, Haliburton sees multiple steps ahead. Take this play against the Miami HEAT, where Haliburton comes up with a steal, directs the fast break and gets an open three for Kyle Guy.

Notice Haliburton immediately points to the player he wants Hassan Whiteside to pass it to. Whiteside obliges, Haliburton gets it back on the wing as planned and waits for his teammate to cut to the rim, drawing defenders and freeing Guy for the three, which he missed.

Haliburton’s fastidiousness has made him averse to turnovers as he is averaging only 2.6 per 100 possessions. Conversely, Ball’s moxie leads to few more giveaways, with the Charlotte Hornets rookie posting 4.6 turnovers per 100.

Both have shot better than expected from deep. Haliburton has shot 46 percent from three while Ball, considered a non-shooter coming into the league, has shot 37.

The tracking data helps tell the story of the differences in their shooting. Haliburton, who has a slow and slightly funky release, mostly attempts wide-open threes and has made nearly 50 percent of them. Ball’s quicker release has allowed him to shoot 41 percent on triples where defenders are within 4-to-6 feet.

When attacking the rim, Haliburton relies almost exclusively on a floater. While he hits it at a decent clip – 51 percent from the short mid-range area per Cleaning the Glass – it’d be nice to see him get to the rim and try to draw contact. Only 15 percent of his total shots come at the rim, and he draws a shooting foul on a measly three percent of his attempts.

Due to his lack of downhill explosion, Haliburton can often be too eager to pass when the right play is to go up for the layup. Here, Ivica Zubac is clearly playing the pass while Marcus Morris stays home on the shooter in the corner. With a more aggressive mindset, Haliburton could have had a decent look at the rim, but instead, it’s a turnover.

Ball attacks more frequently but isn’t yet a great finisher. He often attempts wild layups, looking to avoid defenders rather than go through them. In the next clip, he tries to switch to his left hand to go around the shot blocker, rather than go into the body, and the attempt is promptly swatted.

Still, he draws fouls on 7.8 percent of his attempts and has improved steadily at finishing throughout the season. It is common for rookies to take time adjusting to NBA athleticism around the rim, so the fact that Ball is at least willing to attack is a good sign.

Defensively, a similar pattern emerges. Ball is an occasional gambler whose risks can lead to big rewards but also causes his fair share of breakdowns. Haliburton, meanwhile, is wise beyond his years as an off-ball defender – his advanced understanding of positioning pairs well with those great instincts.

Ball leads all rookies in steals per game at 1.6 and is 12th overall in the league – already adept at lingering around in the backcourt and swiping the rock from unsuspecting rebounders.

But Ball’s biggest weakness as a defender right now is his closeouts. He tends to hang around the paint a bit too long when guarding the weak side, forcing him to close out hard, thus leaving him very susceptible to pump fakes and fouls. Often, his ball-watching leaves him caught on a screen, then recovering too hard to a non-shooter in Tyrese Maxey, allowing for the drive.

Even with his flaws, Ball’s energy and feel make him a decent defender for a rookie. Of course, he should only improve as he becomes accustomed to the speed of the game.

Haliburton’s defense, like his offense, is more carefully approached. Haliburton can be caught on screens and fooled by good fakes as many rookies can, but it is rare. Watch as the Kings double Ben Simmons in the post, leaving Haliburton to guard two shooters. He plays a brief game of cat and mouse with Simmons, forcing the pass to the wing. The talented youngster then feigns the closeout to Danny Green before pouncing on the swing pass to the corner – all in all, this is a veteran play.

Overall, Haliburton and Ball are yin and yang. The introvert and the extrovert. Each could probably use a dash of the other’s game to take themselves to the next level.

While their styles are opposite, their impacts and intangibles are similar. Both players rely on their brains first and foremost. More importantly, both have gained the trust of their coaches.

Haliburton earned it almost immediately and has been a mainstay in the Kings’ crunch-time lineup. That five-man group, featuring the rookie along with DeAaron Fox, Buddy Hield, Harrison Barnes and Richaun Holmes, has been incendiary, outscoring opponents by just over 20 points per 100 possessions, per Cleaning the Glass.

Ball took a little more time to get there but has since shown flashes of brilliance. Just watch the second half of the Hornets’ game against the Milwaukee Bucks earlier this season to see how Ball can take over a game on both ends when everything is clicking.

Ball will likely win Rookie of the Year, his counting stats and occasional standout showings give him the edge in that race. Haliburton’s efficiency and mistake-free play might give him the edge as the better player right now, though.

Ball’s ceiling is demonstrably higher as he does things on a basketball court that not many in the league even attempt, let alone other rookies. Haliburton will be a consistent contributor and likely have a long career, but it is hard to see a path to superstardom.

There will be many years ahead to dissect their games as they improve and begin competing at a higher level. For now, we can appreciate two bright spots in a previously dismissed draft class.

Myles Turner extension with Pacers takes major trade chip off the table
Everything LeBron James and Lakers said about controversial loss in Boston
LeBron Game 7 Finals jersey auctions for $3.7M
The Celtics have been the one constant in LeBron’s career
3 galaxy brain Chris Paul trades to blow your chakras wide open