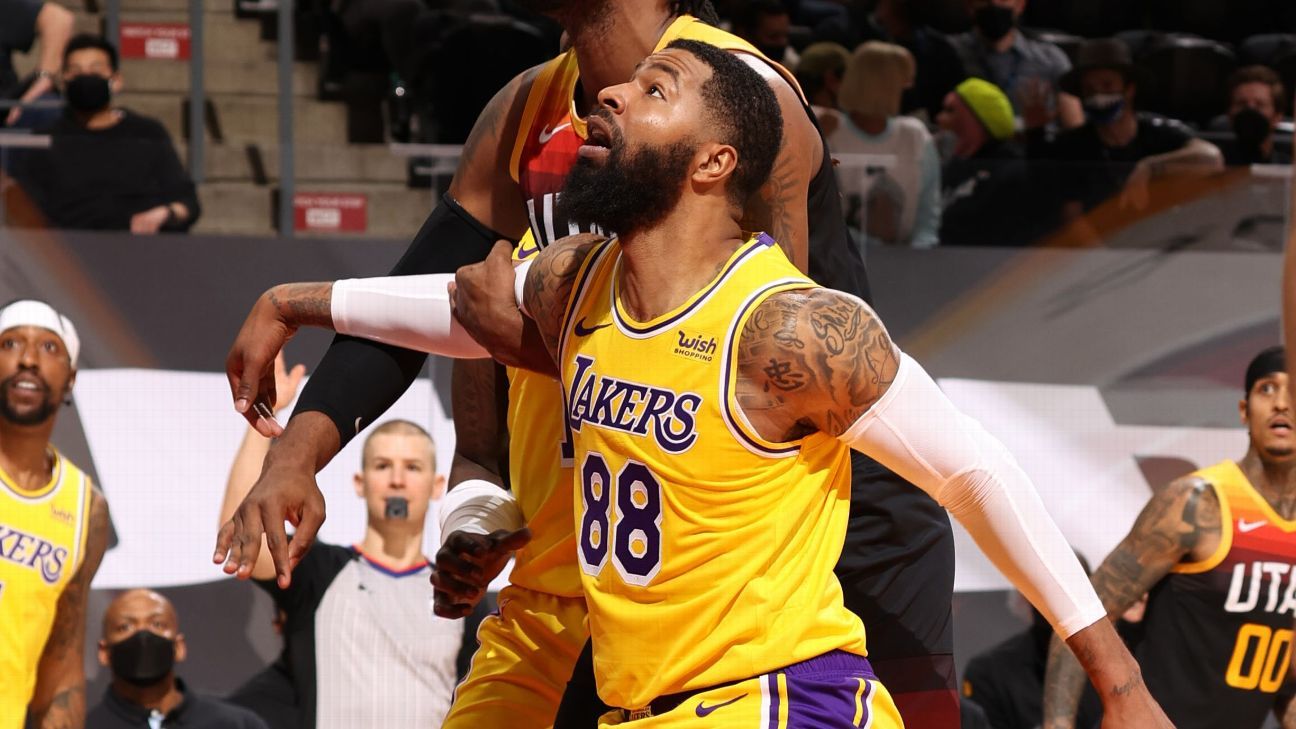 As if the Los Angeles Lakers weren’t already struggling enough, down two starters heading into Wednesday’s game against the Utah Jazz, a blowout 114-89 loss only highlighted the rut the defending champions are in.

With Anthony Davis (right leg) and Dennis Schroder (health and safety protocols) sidelined, the Jazz jumped all over the Lakers. They led by as many as 29 points in handing L.A. its fourth loss in a row and fifth in its past five games since Davis aggravated his tendinosis and suffered a calf strain a week and a half ago.

Utah has won 15 straight at home.

“They’re playing like the best team in the league right now,” Lakers coach Frank Vogel said of Utah, which shot 22-for-48 from 3 in the rout.

And the Lakers, still third in the Western Conference standings at 22-11, aren’t playing anywhere near as well as their record would suggest.

L.A. kept pace with Utah in the first quarter at Vivint Arena, trailing 24-23 after one, before the Jazz erupted in the second and third quarters, outscoring the Lakers 66-41 to break the game open.

Markieff Morris, who got the start in the frontcourt against Utah’s Rudy Gobert with Davis out, said that the Lakers’ current struggles are a reality check the team needed.

“[I] think early on we won with talent a lot and we got a lot of role players that know their roles. Now with those guys out — with AD out, in particular — we need guys to do different things,” Morris said after finishing with season highs in points (12) and rebounds (9). “This is new for all of us. But we need it. If you ask me, we need it. Because you never know with injuries. You never know in the playoffs. You never know. We need these challenging times to really find who we really are.”

The four-game losing streak matches the longest the Lakers have had in the past two seasons, but Morris said it is hard to compare this season’s squad to last year’s because of the roster turnover and challenges that come with the coronavirus-compacted schedule.

“This is the most basketball that I’ve ever played in my life — this season and last season combined,” he said. “It’s an unbelievable amount of basketball that we all are playing. Mentally it gets draining. Especially when you lose.”

The Lakers have four more games before the All-Star break, with the next three of those games — home against Portland, Golden State and Phoenix — all coming against teams with winning records.

LeBron James, whose teams are 1-for-3 in repeat title bids so far in his career, remained pragmatic, not using L.A.’s missing players as an excuse, but leveling with the fact that the season won’t run off the rails because of February struggles.

“It’s a tough stretch for us,” James said after scoring 19 points in 28 minutes. “You know this won’t define who we will be for the rest of the season and for the long haul. That’s for sure.”

When asked if the losses could help L.A.’s overhauled locker room get to learn one another, he concurred.

“Always the best teacher in life is experience,” James said. “You know, for us to be going through this right now, I think it’s going to benefit our team tremendously.”

As with any team harboring back-to-back championship aspirations, Morris kept one eye on the future when assessing Wednesday’s result.

“We see the Jazz, we know they beat our ass tonight,” he said. “But in the playoffs it’s a different story.”