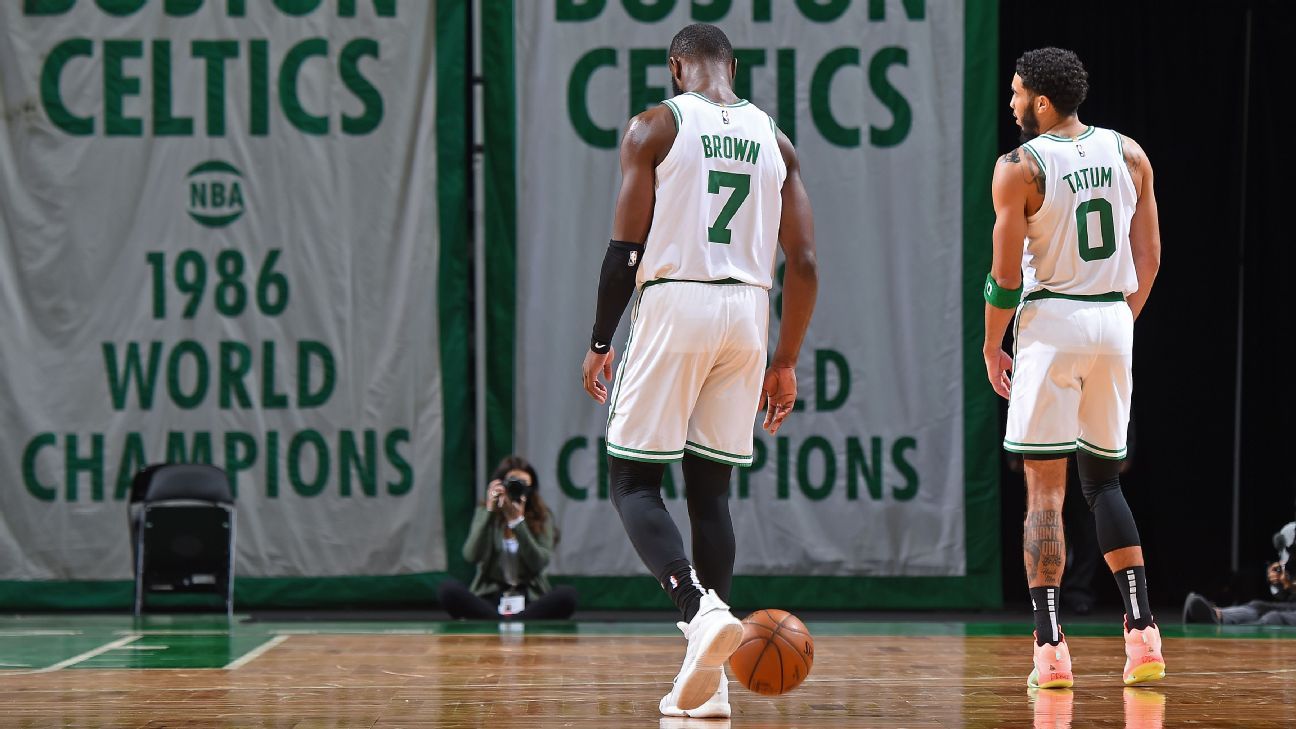 THERE ARE TWO versions of the Boston Celtics.

One is led by two under-25 All-Stars and carries the expectations of having reached the conference finals in three of the past four seasons. The other has eight players in their first or second year in the NBA, most of whom have been unable to earn a consistent spot in the team’s rotation.

The divide between those two realities hints at why the Celtics enter tonight’s showdown against the LA Clippers sitting at .500, in a morass of teams fighting for position in the back half of the East playoff picture.

“That’s shocking,” an Eastern Conference scout said over the weekend of Boston’s record. “They have more talent than their record would indicate.”

Despite developing two All-Stars in Jaylen Brown and Jayson Tatum, Boston’s momentum has cratered. A series of free agent defections, misspent draft picks and cuts in payroll has resulted in a team that finds itself far off from the stated goal of hanging an 18th championship banner to the TD Garden rafters. Their weaknesses have been exposed, and they’re lacking in good options to fix them.

So, with two games left before the All-Star Break and less than four weeks until the trade deadline, the Celtics are still searching for their identity.

“I feel like our group is pretty together,” Celtics GM Danny Ainge told ESPN. “Guys are working hard still, and I feel like we don’t really know who this team is yet.”

TATUM AND BROWN will head to Atlanta this weekend not only as All-Stars, but as the first Celtics duo to each average 25 points per game since Larry Bird and Kevin McHale in 1986-87.

Add in Kemba Walker, an All-Star a season ago, and Marcus Smart, a two-time All-Defensive Team selection, and Boston should have the makings of a championship contender, not a team scuffling in the bottom half of the Eastern Conference playoff picture.

“We have a lot of work to do to separate ourselves as better than where we are,” Celtics coach Brad Stevens said. “And that’s the reality of it.”

An exodus of veteran contributors over the past two years has left Boston perilously thin behind its big four. And, thanks to a series of injuries to each of those players, that grouping has started just two games together this season and has shared the court for a grand total of 28 minutes.

“The injuries and everything else, I think, have worked against them, for sure,” an Eastern Conference executive said, “and especially if Kemba is not Kemba.”

Scouts and executives around the league had the same opinion with regard to the Celtics: If Walker can’t return to an All-Star level, Boston’s hopes of being a threat in the East will vanish.

“He can still provide value,” a Western Conference executive said. “But is he worth $35 million? Is he worth that number? That’s tough [to build around] if he isn’t.”

In being named an All-Star last season, Walker averaged 21.8 points per game before the break, shooting nearly 39% from 3-point range. Then his knee started acting up, causing him to miss all but 10 games in the second half of the season.

And, while there have been recent signs of Walker returning to form — he dropped 32 points on the Pacers last week, part of a stretch that has seen him average 23.2 PPG over his past five games — he still is shooting 38.5% overall and 35.7% from deep, numbers that more resemble his early Charlotte Bobcats days than his All-Star credentials with the Hornets.

“You’d have thought after the playoffs he’d have come out and had a really good start to the year,” the exec said. “That [he hasn’t] has surprised me.”

Walker’s inconsistent contribution has also exposed the lack of depth behind him. Jeff Teague, one of the few veteran reserves on Boston’s roster, is shooting a career-worst 34.2% from the field. The Celtics’ other point guard options are mostly untested rookies and second-year players.

That is a problem that exists at nearly every position for Boston, stemming from decisions made over the past two offseasons. Kyrie Irving, Al Horford, Marcus Morris Sr. and Terry Rozier all left in free agency in 2019, with only Rozier’s departure bringing back any help (as part of a sign-and-trade deal for Walker). Gordon Hayward followed this past summer, when the Celtics decided the hefty offer he got from the Hornets (four years, $120 million) was out of their price range.

Boston had previously turned down overtures from the Indiana Pacers that could’ve yielded Myles Turner and Doug McDermott in a Hayward sign and trade. Once the former All-Star landed his deal with Charlotte, Boston was able to negotiate a sign-and-trade with the Hornets that created a $28.6M trade exception, the largest in NBA history.

That exception could end up being a useful asset, one that helps Boston improve either before the trade deadline or this offseason. But to this point, the inability to replace Hayward has hurt the Celtics on the court.

The two veterans Boston signed this offseason, Teague and center Tristan Thompson, have struggled, shining a brighter spotlight on Boston’s decision to rely on the bevy of young players they’ve drafted over the past three years, from rookies Aaron Nesmith and Payton Pritchard to second-year guards Romeo Langford and Carsen Edwards and forward Grant Williams to third-year center Robert Williams III.

“They’ve all had a chance to play, and they’ve all had good moments,” Ainge said. “What’s difficult about this year is just the roles that we intended them to fill, especially as young players, is not one of being a primary scorer. When you lose [starters], everybody has to move up and play a bigger role. That’s when we have had some inconsistencies this year.”

Pritchard, the No. 26 pick out of Oregon, has firmly established himself in the rotation, averaging 7.4 PPG and shooting 38% from deep. Now in his third year, Robert Williams has become a reliable member of Stevens’ three-headed monster at center. But the rest of Boston’s rookie and sophomore brigade has provided very little; Langford has yet to even play this season.

Want to forecast where your favorite NBA stars could wind up? Create your own deals with ESPN’s Trade Machine.

That’s resulted in Boston being stuck around .500 despite Tatum remaining an All-Star and Brown joining him at that level, in what has been a Most Improved Player-caliber season so far.

“If you would have told me Brown and Tatum were going to be this going to be this good, I’d be surprised [at their record],” a Western Conference executive said. “I could’ve seen if they’d struggled but not as well as those guys have played. That’s surprising.”

FOR THE PAST several years, the Celtics have tried to pull off the most tricky balancing act an NBA team can attempt to do: winning today, while remaining well-positioned to win tomorrow. It has almost worked. The Celtics reached the Eastern Conference Finals in 2017, 2018 and 2020. They’ve won 35 playoff games in the past four years. Only the Golden State Warriors (46) have won more.

But the Warriors have hung two championship banners in that span, something Boston hasn’t done since 2008.

The Celtics’ record thus far this season would indicate that drought is likely to continue, but Ainge doesn’t see the title window closing for Tatum and Brown, invoking the names of players such as LeBron James and Michael Jordan, who struggled to win titles early in their careers.

“You have to keep things in perspective,” he said. “These guys are 22 and 24 years old right now. If you put all those guys I just mentioned at the same ages, a lot of them were not who they became [at that age]. All the great players, it just takes time for them to play their very best.”

Still, league insiders don’t believe the Celtics can stand pat, and potentially waste a year of the primes of their two young building blocks who are playing at an elite level.

“There comes a time where you have to do something to keep your stars placated and show that you’re trying, especially when they’re young and early in their primes,” the East executive said. “You have to make that commitment to them.”

That’s something Ainge has been reluctant to do in the past. The last time Boston acquired a player in an in-season trade was six years ago, when the team landed Isaiah Thomas from Phoenix. Only the San Antonio Spurs have a longer drought.

“They’ll only do something,” the West executive said, “if they think they’re going to bury you.”

The Celtics no longer have the deep cache of draft assets from other teams to potentially include in a deal. They do still have all of their own future first-round picks, as well as the massive trade exception, which puts them in better trade position than most other contending teams. Rival executives believe they are hunting for a player who can play either forward spot and provide some scoring punch — exactly the kind of player they lost when Hayward left.

And, while the team’s salary is currently low, ownership has spent into the luxury tax in the past, and Ainge indicated a willingness to do so this season.

“If there’s players we can get that can put us over the top and keep us under the hard cap, we’ll do a deal that falls into that category,” he said. “But we’re not going to do it for a band-aid, or somebody that maybe, maybe, will help us a game or two.”