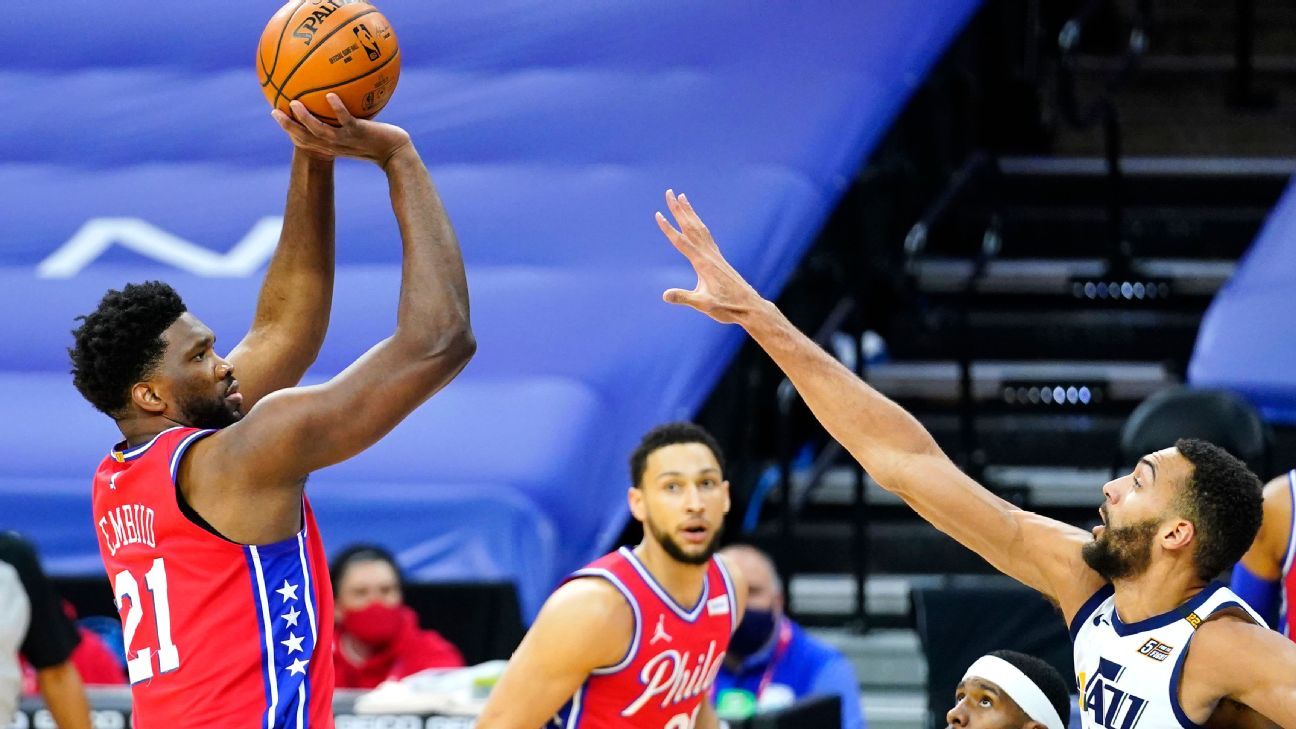 Wednesday night’s NBA slate of games includes numerous intriguing matchups, from the top team in the East facing the top team in the West, the drama of James Harden‘s return to Houston, All-Stars going up against each other with the Chicago Bulls‘ Zach LaVine facing the New Orleans Pelicans‘ Zion Williamson, and two of the league’s top scorers squaring off in Steph Curry meeting Damian Lillard.

Additionally, 12 teams are wrapping up the first half of the season as All-Star Weekend rapidly approaches.

With so much action to keep an eye on, we asked our NBA insiders for their biggest takeaway from the biggest games.

Anyone who watched even one second of the Philadelphia 76ers‘ 131-123 overtime victory over the Utah Jazz Wednesday night could tell the game meant something extra special to Sixers star Joel Embiid.

Embiid — who told ESPN’s Jackie MacMullan back in December that he should have made an All-NBA team over Rudy Gobert last season, and has been campaigning to be the league’s Defensive Player of the Year — was dominant at both ends in Wednesday’s win, scoring 40 points to go with 19 rebounds, three assists, a steal and two blocks in 40 minutes.

On offense, Embiid repeatedly powered through Gobert inside, getting his characteristic double-digit free throw attempts while also getting several buckets at the rim. Meanwhile, on the defensive end, Embiid was flying around, repeatedly breaking up lobs to Gobert and, on one possession, contesting a Donovan Mitchell drive and then recovering fast enough to block Gobert at the rim.

Embiid has said since before the season began that he is on a mission to prove that the lack of leaguewide recognition he received last year was a mistake. Wednesday night was the latest example of how successful that campaign has been. And while Embiid may not win Defensive Player of the Year — in fact, Doc Rivers said before the game his teammate, Ben Simmons, should be at the top of people’s ballots for that award — games like Wednesday’s are why Embiid is one of the favorites to be the NBA’s Most Valuable Player this season, and the Sixers enter the All-Star break with the best record in the Eastern Conference. — Tim Bontemps

Harden dominant in return to Houston

Nothing about James Harden’s return to the Toyota Center came as much of a surprise. Harden received a mixed reaction from Rockets fans in the pandemic-sized crowd, as some cheered in appreciation for his eight spectacular seasons in Houston and some booed, letting out the fresh, hurt feelings from Harden forcing a trade less than two months ago.

As he’s done consistently since joining the Brooklyn Nets, Harden dominated, posting his eighth triple-double since the trade with 29 points, 10 rebounds and 13 assists. And the Rockets lost, 132-114, extending the franchise’s longest skid in two decades to a painfully fitting 13 games, matching Harden’s jersey number that will one day hang from the Houston rafters. — Tim MacMahon

The Indiana Pacers facing the Cleveland Cavaliers wasn’t a marquee matchup, but Pacers guard T.J. McConnell found a way to steal the spotlight. McConnell had nine steals in the first half, the most by any player in one half since the stat became official in 1973-74.

McConnell ended up with 10 steals for the game, one shy of the record, but had 16 points and 13 assists for a very unusual triple-double in Indiana’s 114-111 win.

Tonight, T.J. McConnell recorded the 11th triple-double with steals since steals became official in 1973-74. He’s the first to do so off the bench according to @EliasSports.

He is also the first Pacers player with a triple-double off the bench since Detlaf Schrempf in Feb. 1993 pic.twitter.com/u7LL1tPL1M

McConnell was 8-for-8 from the field to become the first player to record 10 steals while shooting 100% from the field in a game, according to the Elias Sports Bureau. He had the highest field goal percentage in a game with 10 or more steals, passing Michael Jordan (78% in 1988).

Dennis Smith Jr. and Mason Plumlee are the 2nd pair of teammates in Pistons history to each record a triple-double in the same game, according to research by the Elias Sports Bureau.

The other Pistons teammates with triple-doubles in the same game were Donnie Butcher and Ray Scott, who did it in 1964.

Kevin Durant trade request: 3 teams that need to go all-out for superstar
Rudy Gobert and Anthony Edwards might have awkward meeting with Timberwolves
Why Zach LaVine is the crown jewel of the 2022 NBA free agency class
Nikola Jokic inks richest deal in NBA history with Nuggets: NBA Twitter applauds
The NBA offseason is a time for dreaming