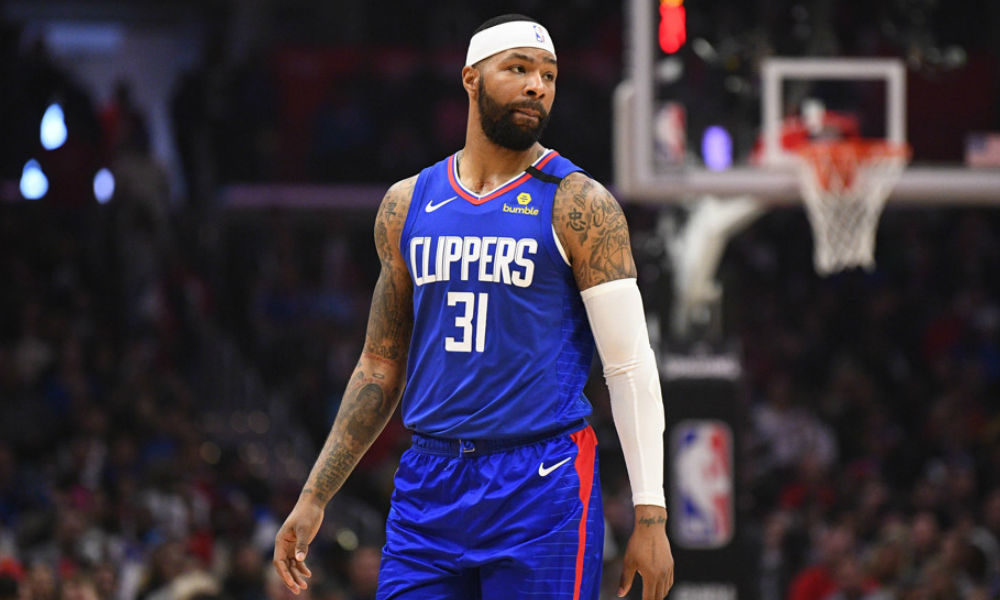 When Marcus Morris Sr. came over to the Los Angeles Clippers last season near the trade deadline, he stepped right into the starting lineup at power forward. He started all 19 regular season games – including the bubble – and when the team re-signed him this past offseason, he looked like a lock to remain in the starting lineup.

But he’s been one of the main anchors of the Clippers’ second unit this year and coming off the bench was something he requested of new head coach Tyronn Lue. Along with Lou Williams, the pair have spearheaded one of the most formidable bench units in the NBA. The pair has combined for 24.8 points per game on the season and they’re both shooting lights out from three-point range.

On a call last month with media, Morris admitted that this dynamic pairing with Williams was exactly what he was envisioning when he initially asked to be part of the second unit.

“Building that chemistry with me and him both coming off the bench, we’ve to be one of, if not the best bench in the league. Both of us are proven vets, proven scorers in this league,” Morris said. “I think our camaraderie, us being really good friends, I think that helps on the court. Not just scoring but just being vets, being able to talk and being able to lead our unit.”

As well as he’s played this season, it wasn’t always such a smooth transition to the Clippers. Morris’ numbers dropped last year from his career averages and he shot 31 percent from the three-point line; the lowest he’s shot since his second year in the NBA. Like most of the team, he faded a bit during the team’s second-round playoff debacle against the Denver Nuggets.

This season, although his scoring isn’t as high as it used to be at 12.4 points per game, Morris’ shooting has been much more efficient. His 46.3 percent from downtown is a career-high. He looks much more comfortable in the flow of the offense and he’s played his role to perfection. Naturally, Morris credits Lue with helping him establish his role.

“I think the biggest difference is just having that exact from [Tyronn Lue] just talking to me and telling me exactly what he’s wanting me to do. Last year, I thought I was a lot of times in no man’s land, I couldn’t really put my finger on my role,” Morris said.

This year, I’m coming off the bench to be aggressive, coming off to bring energy, shoot the ball, the guys I’m playing with just playing off them. Lou does a great job of drawing the defense and you have to have guys that can knock it down. I’m just here to do whatever it takes, whether it’s to bring energy or to score.”

Morris began the season missing the first eight games due to a knee injury. But he’s always been one of the more durable players in the league and since then, he only sat out one game. Thankfully for him, he didn’t end up needing surgery only rest.

Lue has been quite pleased with Morris’ contributions this season. He credited Morris’ conditioning while acknowledging the extra work he’s put in to be as effective as he has.

“Just putting in the work, just trying to get his body right, just trying to adjust to the speed of the game, when you’ve been out for so long it is kind of tough to just step back in and play well,” Lue said. “We’ve been needing and asking more from him in the post, rebounding the basketball and, of course, shooting the basketball. He’s been great and he’s been putting in the work. You see the results.”

Like the rest of the team, Morris has been able to shut out any lingering effects from the bubble. He knows the Clippers have championship aspirations this season and, because of the way they flamed out in the playoffs, there will doubt as to whether this team is capable of winning a title.

And for the Clippers to win their first championship in franchise history, they’re going to need Morris to be at his best. His versatility is key to their attack, while that ability to stretch the floor with his three-point shooting –plus putting the ball on the floor or posting up – is a big part of what makes the Clippers so dangerous.

He’s willing to do whatever needs to be done.

“I’m a hooper. Whatever you need me to do. One thing I do, I don’t just talk,” Morris said. “I’m just playing. I’ve been in the league for a long time, going on my eleventh year. It doesn’t change for me. One thing you’ll find out about me is I’m never too high, never too low.”