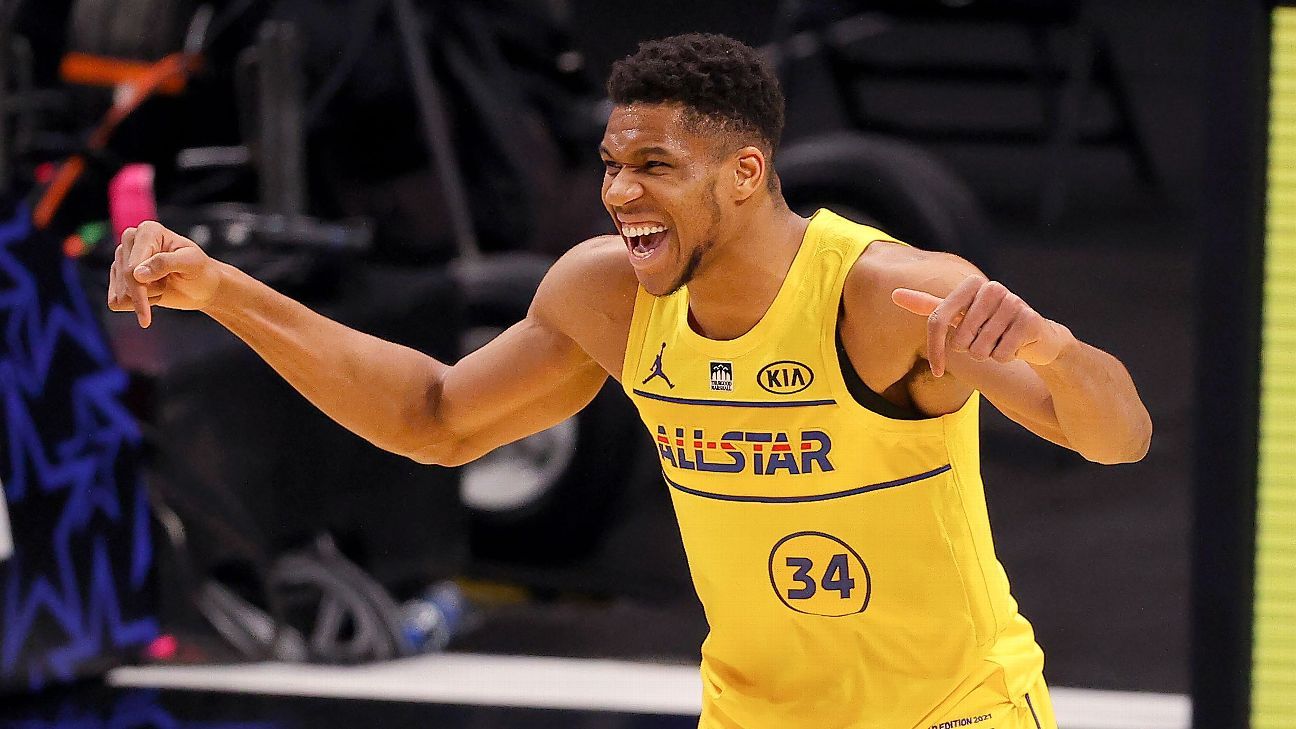 Thanks to a perfect 16-for-16 performance from the field — including banking in multiple jump shots — Milwaukee Bucks star Giannis Antetokounmpo won his first NBA All-Star Game Most Valuable Player Award, as Team LeBron cruised to a 170-150 victory over Team Durant on Sunday night in Atlanta.

“You know usually it is closed [on Sundays],” Antetokounmpo said with a smile, when asked about the banked-in jumpers, “but for me, it was open extended hours.”

In a game Team LeBron controlled from start to finish, it was Antetokounmpo, who finished with a game-high 35 points, Stephen Curry — who had 28 points and hit 8 3-pointers — and Damian Lillard — who had 32 points and hit the game-sealing 3-pointer — who led the way. The three fought for the MVP trophy down to the end, with Antetokounmpo ultimately winning it.

At 100%, Antetokounmpo recorded the best field goal percentage in an All-Star game ever with a minimum of 10 attempts. The previous record for most makes without a miss belonged to Hal Greer, who went going 8-for-8 in the 1968 All-Star Game.

“It’s fun,” Antetokounmpo said. “It’s fun. I was happy, my teammates had fun, and just being around great players, they’re just easy to play with.”

This All-Star Game, like everything else about this season, was inescapably altered by the ongoing COVID-19 pandemic. Originally scheduled to be in Indianapolis, it was instead moved to Atlanta. Only a handful of fans were in the stands, and strict quarantines were in place for everyone involved.

That, however, didn’t prevent the virus from infiltrating the event, as contact tracing forced Philadelphia 76ers stars Joel Embiid and Ben Simmons to both be pulled out of the game by the league — and potentially kept away from the Sixers when the second half of the season begins Thursday.

The situation involving Embiid and Simmons was the exact example NBA Commissioner Adam Silver mentioned Saturday when discussing why, he believes, most NBA players will eventually get the vaccine. While Silver said the NBA will not mandate players get the vaccine, if they do get vaccinated they would no longer have to quarantine — and, thus, be unable to play — if they come in contact with someone who tests positive for COVID-19.

But when LeBron James was asked about being vaccinated Sunday afternoon during his pregame media availability, he declined to say whether he would get it.

“That’s a conversation that my family and I will have. Pretty much keep that to a private thing,” James said. “Obviously I saw Adam had his comments about the vaccination. But things like that, when you decide to do something, that’s a conversation between you and your family and not for everybody. I’ll keep it that way.”

James, who said early last month that the NBA choosing to hold an All-Star Game amid the ongoing COVID-19 pandemic was a “slap in the face” last month, lived up to the other quote he had about the game that day.

James, who hadn’t scored less than 13 points in any of his prior 16 All-Star appearances, had only 4 points on 2-for-7 shooting — including whiffing on two wide-open layups — in 13 minutes. His teams are now 4-0, however, since the league shifted to its current format of having the top two vote-getters choose their teams in 2018.

Team LeBron, due to its victory, donated more than $1 million to the Thurgood Marshall College Fund, while Team Durant donated $500,000 to the United Negro College Fund.

Team LeBron also won the third quarter by a single point and took a 21-point lead into the fourth quarter — meaning that, with the “Elam Ending,” Team LeBron simply had to score 24 points before Team Durant scored 45.

The only drama left at that point would be whether Antetokounmpo, Curry or — after a late charge, Lillard — would ultimately win the All-Star MVP trophy for the first time. But while Curry had a chance to end the game with a half-court 3-pointer and missed, on the next trip down Lillard pulled up from the halfcourt line himself and buried it instead.

Ultimately, though, it was the Greek Freak, and his perfect night, that won the day.

NBA Trade Grades: Lakers land Rui Hachimura for next to nothing
Simmons, Embiid ‘duke it out’ before wild crowd
Refs’ union: Missed LeBron call ‘gut-wrenching’
Knicks vs. Nets prediction and odds for Saturday, January 28 (Bank on an offensive shootout)
Everything LeBron James and Lakers said about controversial loss in Boston