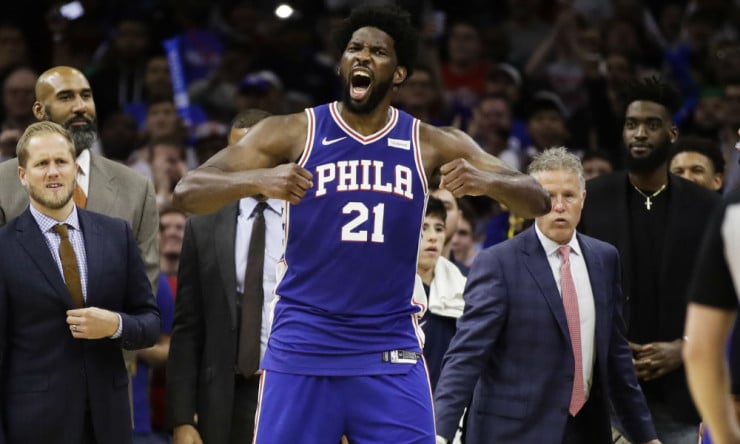 With the All-Star break over and the second half of the NBA season underway, it’s the perfect time to ponder questions such as what will happen at the trade deadline, how the standings might take shape and who will win MVP.

With subjects such as those in mind, here are five bold predictions for the second half of the NBA season.

The HEAT Trade for Kyle Lowry

The Toronto Raptors should be pragmatic at the trade deadline. The franchise icon is in the last year of his contract, and if he wishes to join a title contender, the time for the Raptors to make that happen is while they can get players and picks in return for him.

It’s compelling to consider Lowry coming home to Philadelphia to help the 76ers complete the process, but the Miami Heat can make a more enticing offer. Given Jimmy Butler’s age (31) and the HEAT’s potential with a big three of Lowry, Butler and Bam Adebayo, they ultimately part with Tyler Herro to bolster their odds of getting back to the NBA Finals.

The Knicks Avoid the Play-In Tournament

Tom Thibodeau is as deserving as any candidate to win Coach of the Year: the New York Knicks return from the All-Star break in sole possession of the fifth seed in the Eastern Conference and half a game out of fourth. They’re giving up the second-fewest points per 100 possessions. They have an All-Star in Julius Randle, who’s having a career season. RJ Barrett’s game is growing significantly, especially on offense, where according to NBA.com, he’s shooting 40 percent from beyond the arc since Jan. 1st and making meaningful strides as a facilitator.

Furthermore, Immanuel Quickley, who’s averaging 12.2 points, 2.4 assists and 2.3 rebounds per game while taking 4.7 threes per game and making them at a 38.1 percent clip, provides a spark for the Knicks off the bench and is going to make an NBA All-Rookie Team.

The Knicks have excellent team chemistry, consistently play hard and show no signs of slipping into the play-in tournament. They’ll be underdogs in the first round, but they’re going to make life difficult for whoever they face.

The Utah Jazz were unquestionably the top team in the NBA in the first half of the season. They entered the All-Star break with the league’s best record, the highest plus-minus rating, the fourth-most points per 100 possessions, yielding the fourth-fewest, and boasting the NBA’s best net rating.

The question is whether the Jazz can continue to play at this level in the second half. They’ve built a 2.5 game lead over the Phoenix Suns, who surged into the break, winning eight of their last 10 games. The third-seeded Los Angeles Lakers, meanwhile, trail Utah by 3.5 games. But sitting out the Lakers loss to the Sacramento Kings before the break and then playing 13 minutes in the All-Star Game should rejuvenate LeBron James; couple that with the return of Anthony Davis, and it’s not hard to see the Lakers overtaking the Jazz for the top seed in the West.

A factor that would help Utah’s hope of entering the playoffs at the top of the Western Conference standings is Los Angeles is presumably unbothered by where they finish the regular season. They’ll likely prioritize pacing their two stars in the final stretch before the playoffs, but the Lakers winning the West would go a long way towards making the next prediction come to fruition.

There have been seasons LeBron James prioritized preserving himself for the playoffs; a wise decision that’s helped him become a four-time NBA champion but came at the expense of being named the regular season’s most valuable player. With that said, he’s arguably the greatest player of all time and deserved to win the MVP Award on more than four occasions.

As it pertains to this season, no one is currently more deserving of the league’s most prestigious individual regular-season award than Joel Embiid. He’s having a career-year, leading the Philadelphia 76ers to the best record in the Eastern Conference while averaging the second-most points and fifth-most rebounds per game and ranking second in player efficiency rating, win shares and box plus-minus.

However, this is a narrative-driven award; and the most compelling storyline regarding the MVP is LeBron, at age 36, being named the regular season’s most valuable player for the fifth time in his NBA career. If he leads the Lakers to the top seed in the Western Conference, there will be no uncertainty about who’s winning MVP this season.

The Clippers Go One And Done

The Los Angeles Clippers have the fourth-highest plus-minus in the NBA, the fifth-best net rating and they’re scoring the seventh-most points per game. However, the Clippers are 7-11 in games within five points in the final five minutes. They’re registering the second-fewest points per game in crunch time, averaging 6.1 per contest. The reasons for those numbers are why it’s hard to trust this team in the playoffs. They don’t have a dynamic or cohesive offense. Los Angeles ranks 18th in assists per game. Kawhi Leonard and Paul George aren’t going to score enough points in isolation to lead them to the championship.

Defensively, as good as the Clippers are on the perimeter, even with the addition of Serge Ibaka, they aren’t providing resistance at the rim; Los Angeles is allowing the fifth-highest field-goal percentage at the cup, and rank in the bottom 10 in opponent points in the paint per game, per NBA.com.

The Clippers are currently fourth in the West, one and a half games up on the Portland Trail Blazers, who they would love to face in the first round of the playoffs, and two games ahead of the team who overcame a 3-1 deficit to eliminate them last year, the Denver Nuggets. Los Angeles is only one and a half games from moving up to third, but if they finish the regular season in fourth, a playoff rematch with Denver likely awaits them.

While the Clippers are motivated to atone for last season’s meltdown, if they again square off with the Nuggets, they’d be running into Nikola Jokic, an MVP candidate averaging career-highs in points (27.1), rebounds (11), assists (8.6), and steals (1.6). Denver’s also starting to get the version of Jamal Murray they had in the bubble. In the Nuggets’ last 12 games, head coach Michael Malone is playing Murray without Jokic more frequently. Since Malone made that tweak, the Nuggets are 8-4, they’re scoring the fifth-most points per 100 possessions and Murray is averaging 28.5 points. If these changes lead to Murray playing more consistently and amplifying his production, it’s bad news for whoever Denver matches up against in the playoffs. Furthermore, unlike the Clippers, the Nuggets have the ammunition necessary to make a meaningful upgrade at the trade deadline. If they add a wing that improves their perimeter defense while stretching the floor offensively, e.g., Harrison Barnes, or they pull off a deal for Kyle Lowry, it raises their ceiling.

Perhaps, the Nuggets and Clippers don’t meet up in the first round of the playoffs, but if they do, the prediction here is that history repeats itself.

Hawks’ Murray expected to miss about 2 weeks
NBA best bets today (Predictions for Paul George and Anfernee Simons on Thursday night)
Gobert looking forward to first trip back to Utah
Mavs blow out old friend Brunson, Knicks at MSG
The Whiteboard: The case for the Pelicans as championship contenders