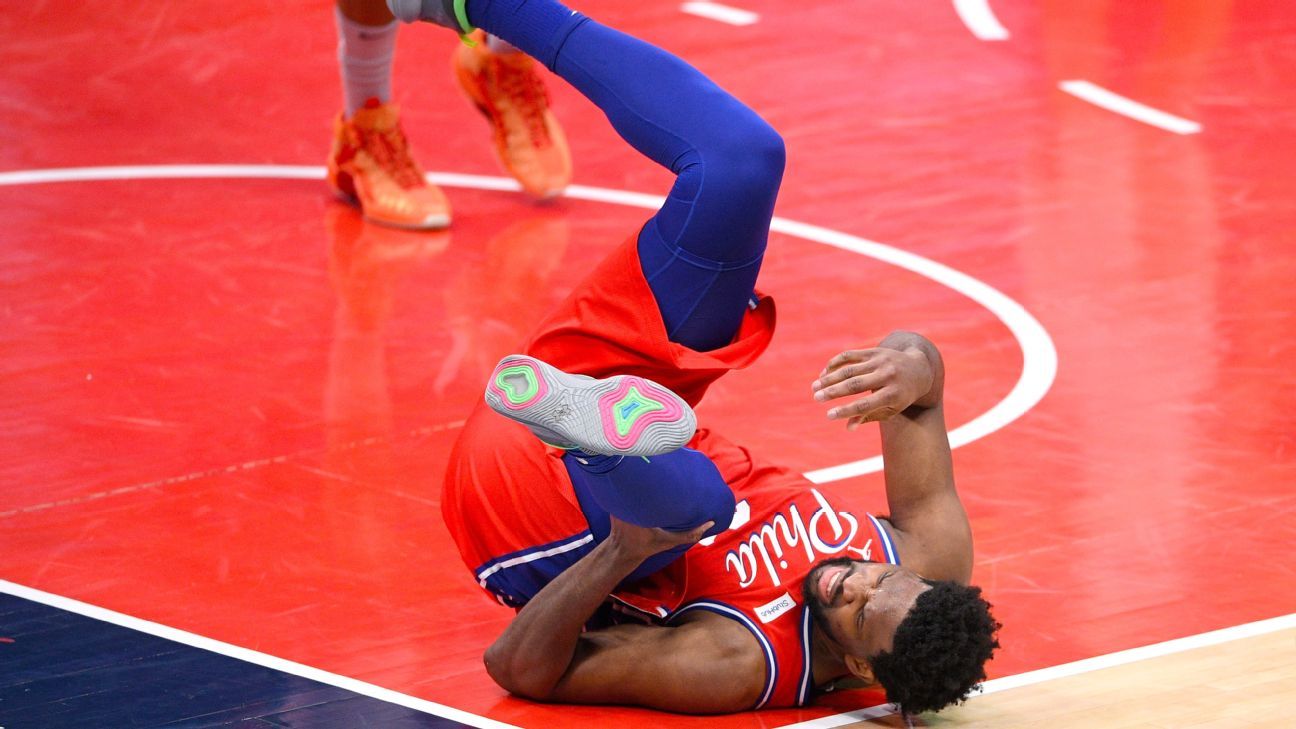 Philadelphia 76ers coach Doc Rivers said he’s “hoping for the best” as the team waits for an MRI on Joel Embiid‘s hyperextended left knee, which he suffered after landing with all his weight on his leg after a dunk in the third quarter of Friday night’s 127-101 win over the Washington Wizards.

“[He] just fell awkwardly,” Rivers said, adding that Embiid will have the MRI after the team returns to Philadelphia later Friday night. “Thought there was a little contact when we went up to dunk the ball. Thought he fell with his balance off.

“I’m not going to speculate [on the severity of the injury]. Tomorrow we’ll have all the information for you. Hoping for the best. I did talk to him. He was in the locker room. He’s in pretty good spirits.

“So let’s just hope for the best.”

Embiid was in the midst of the latest dominant performance of his MVP-caliber season, scoring 23 points on 8-for-11 shooting to go along with 7 rebounds, 3 assists and 2 blocks in 20 minutes, when he caught a pass from Tobias Harris and flew in for a dunk to give Philadelphia an 80-60 lead with 6 minutes, 20 seconds remaining in the third quarter.

But as Embiid went down after the dunk, his full body weight landed on that left leg — causing it to hyperextend, sending him falling to the court and causing him to writhe around in pain.

After staying down for a few minutes, Embiid eventually got to his feet and walked off under his own power — though with a fairly pronounced limp — as he went straight back to the visitors locker room inside Washington’s Capital One Arena.

“When I saw the replay, it’s just that he landed in a tough position on his left knee, I believe, so it looked like a hyperextension and that’s what we’ll hope it is,” Harris said. “We’re just praying he’ll be OK and he’ll be healthy tomorrow as he gets the MRI.

“We know how important Joel is to the team, and how much emphasis he puts on his health and his body this year, so it was unfortunate to see that happen. So, just really praying that he’ll be all right.”

If Embiid is out for any length of time, the Sixers will turn to some combination of Dwight Howard, Tony Bradley and even Ben Simmons to fill Embiid’s minutes at center, but none of them would be able to adequately fill the hole left by the player Rivers said is “obviously” the MVP of the league thus far.

“It helps,” Rivers said of having options to try at center. “Obviously, Joel is the MVP of the league, but having Tony and Dwight and Vincent, having Mike Scott‘s ability to play the 5, hopefully if Joel is out at any point, we can hold the fort.”

Embiid had a similarly scary situation last month when he hyperextended his right knee in an awkward fall against the Portland Trail Blazers after blocking an Enes Kanter layup. In that game, Embiid returned a few minutes later and dominated, scoring 31 first-half points in a matchup Philadelphia eventually lost.

Philadelphia got Embiid back Friday night after both he and Simmons missed Thursday’s win in Chicago over the Bulls — as well as Sunday’s All-Star Game in Atlanta — because of contact tracing stemming from a barber both stars visited before heading to Atlanta.

Simmons remained out Friday but was expected to return — assuming he doesn’t have a positive test for COVID-19 before then — for Sunday’s game in Philadelphia against the San Antonio Spurs.

The win kept the Sixers atop the Eastern Conference, moving them a full game ahead of the second-place Brooklyn Nets.