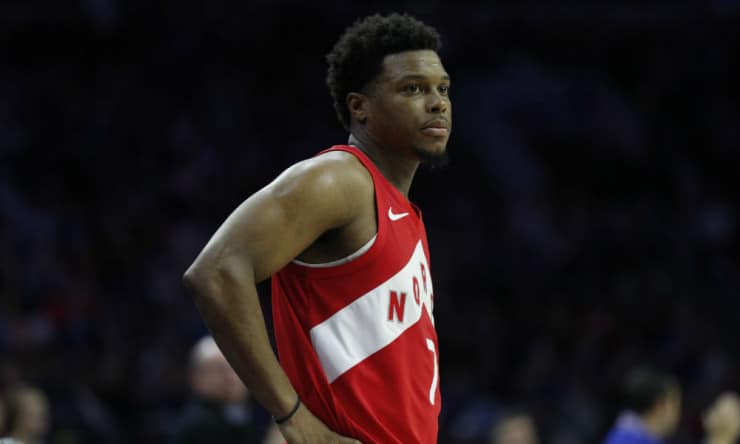 As the trade deadline nears, many teams are looking to acquire a player that will take them to the next level. Whether it’s an outside playoff team looking to lock themselves into a spot, or a team that wants to ascend to contender status, moves are going to be made.

It’s one of the biggest days in the NBA, all on a random Thursday in March. There are plenty of names being thrown around, but here’s a rapid-fire look at the bigger names that might be on the move soon. Now, who’s going to be the difference-maker for a new squad?

The seventh-year forward has requested a trade from the Orlando Magic, per The Athletic’s Jared Weiss. The Magic are headed for another lottery appearance and, with all of the injuries they’ve suffered this year, it’s time to blow it up. Gordon has been a piece that they have not been willing to deal with in past seasons, but the years have added up.

And, according to the Action Network, the Boston Celtics are the favorites to make the move for Gordon. The potential package may include two first-round picks and Marcus Smart for Gordon and Evan Fournier. This move would add more length and shooting to the Celtics as they look to make a playoff run as well as replacing Smart with a better shooter.

While the Celtics are currently 21-22 and the eighth seed in the Eastern Conference, Gordon has made it clear to the Magic that he wants to join a contender. The Golden State Warriors have tried to acquire the power forward too, per Alex Espinoza.

The Houston Rockets also reportedly have tried to trade two first-round picks for Gordon in recent days despite not being his ideal fit. Moving on from Gordon should be a priority for the Magic as they start yet another rebuild.

The New Orleans Pelicans point guard has been at the forefront of the trade market in recent days with multiple teams being thrown around. Ball is having a career year with highs in every scoring category, including an improved free-throw percentage up from 56.6 to 76.7 percent this season, per Basketball-Reference. Ball would be a great fit on many teams as his crafty passing and consistent three-point shooting can translate well into any offense.

The Atlanta Hawks, Chicago Bulls and New York Knicks are all in on getting Ball, according to the New York Post. Out of the three, the Bulls would likely be the best fit as Ball could play alongside Zach LaVine as they attempt to make a playoff run. The Hawks could be another great fit for Ball as his lethal shooting next to Trae Young would make for a scary guard duo for opposing teams.

The Knicks are very interested in Ball but could stand pat and wait until he hits free agency this summer as they would be his rumored top destination.

The Atlanta Hawks have been shopping their power forward publicly for some time now, but is now the time to move him? Following the firing of Lloyd Pierce, the team has completely turned it around under new head coach Nate McMillan and is back in playoff contender in the East. Collins has been a big part of the Hawks’ newfound success this season, averaging 18.3 points and 7.8 assists per game to go along with a 37.4 three-point percentage.

As a new report by Bleacher Report surfaced, it’s a bit questionable that Collins will be moved considering the teams out of sorts demands for a return of first-time All-Star, Jaylen Brown. It’s probably safe to assume that the Celtics are done in conversations for Collins as the Hawks reached too far. I

Ultimately, it does not make much sense to trade a trove for Collins because he will be a restricted free-agent that many will consider offering a max contract to. The Dallas Mavericks have also been a big suitor for him as he has balled out against them in previous matchups, per Sports Illustrated. A big three of Luka Dončić, Kristaps Porziņģis and Collins would be scary as they would be able to score at all levels.

Additionally, the Sacramento Kings, Detroit Pistons and Minnesota Timberwolves have also been involved in trade discussions with Atlanta.

The Houston Rockets are expected to move Victor Oladipo before the deadline Thursday, according to ESPN. Oladipo has gotten back to pre-injury form this season averaging 20.8 points, 5.0 rebounds and 4.7 assists per game over 29 games for the Indiana Pacers and Rockets. The former All-Star shooting guard could be the biggest name to move at this year’s deadline. After being the prized piece in the James Harden trade, it became clear that it was unlikely that he would remain with the team in the future.

Entering the final year of his four-year, $85 million contract, there’s chatter about Oladipo’s interest in either the Miami HEAT or the New York Knicks during free agency.

According to CBS Sports, the Dallas Mavericks are another team that has an interest in Oladipo, but could wait until free agency to make their swing at him. Will one of the three teams step up and try to acquire him now and re-sign him to a new contract? Tomorrow’s the day to find out.

The veteran point guard for the Toronto Raptors has been involved in trade talks in recent days, as the Raptors have started to blow up as a team internally. Amidst all of the drama surrounding Pascal Siakam and head coach Nick Nurse, Lowry’s name has been one that has been talked about around the league as a potential trade target. The six-time All-Star’s play has remained at that level this season as he averages 17.6 points, 5.6 rebounds and 7.4 assists per game.

While in negotiations for a new contract with Toronto, Lowry could still be on the move – with two potential interested teams in the Miami HEAT and the Philadelphia 76ers, per NBCSports. The HEAT would be a good fit for Lowry as they have not had Goran Dragić or Avery Bradley fully healthy for most of the season.

With Lowry on the floor alongside Jimmy Butler, Bam Adebayo and Tyler Herro, the team could realistically threaten the Brooklyn Nets for the Eastern Conference title and another shot at the NBA Finals. The 76ers are an interesting fit as they have All-Star point guard Ben Simmons leading the offense. If they were to acquire Lowry, he may come off the bench, a move that would give them the best sixth-man in the league.

The Sacramento Kings forward has gotten buzz in the trade market these past few months, and Thursday is their big chance to cash in this year. Sensibly, Kings are expected to shed his salary as they do not look like a playoff-caliber team this season and could use the assets to build around their budding star, De’Aaron Fox. Barnes is having his best season in Sacramento thus far, averaging 16.3 points, 6.5 rebounds and 3.7 assists per game – but he’ll bring veteran leadership no matter where he ends up.

Barnes is still under contract for another two seasons and makes rotational sense for loads of contenders. The Denver Nuggets have shown interest in the former champion, according to the Denver Post, as they look for another wing to play alongside Jamal Murray and Nikola Jokic.

The Boston Celtics were once rumored to be in on Barnes but as the deadline nears 𑁋 that has died down.

All of these players are hot names on the trade market right now, and it wouldn’t be a surprise to see any one of them on the move before tomorrow’s deadline. Will Kyle Lowry be the last piece that makes the HEAT a threat in the Eastern Conference once again this season? Is LaVar Ball right that Lonzo will end up as a Knick this year? Is a team going to unload their assets for a player like John Collins or Victor Oladipo as opposed to waiting for free agency this summer?

All of the questions will be answered by 3 P.M. ET tomorrow – so let the madness begin.

The secret history of NBA players “walking the dog” — and how Ja Morant perfected it
Lakers vs. Celtics player prop bets for Saturday, January 28 (Lebron vs. Boston)
Spurs vs. Clippers prediction and odds for Thursday, January 26 (Clippers stay hot)
Best NBA prop bets today for Nets vs. Sixers (Seth Curry has been hot)
Everything LeBron James and Lakers said about controversial loss in Boston