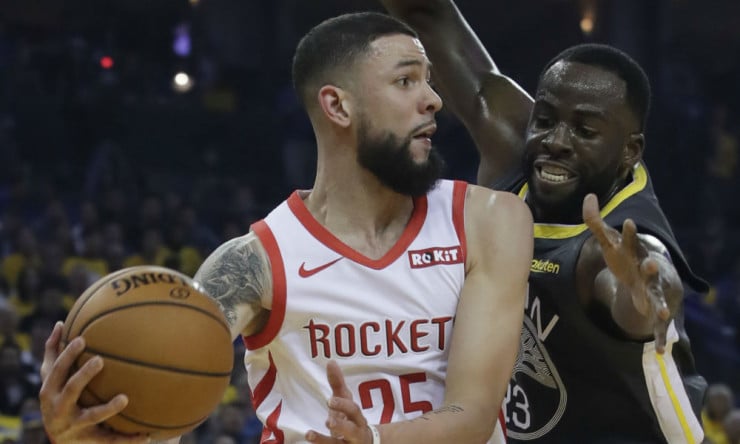 It feels like ages ago but, for a short while, Austin Rivers was the most hyped prospect in the draft class of 2012. Sure, that came before a slightly underwhelming freshmen season at Duke. But he was the one.

Despite failing to live up to the hype, Rivers still had a successful collegiate season. The sharpshooter averaged 15.5 points and 2.1 assists per game – good enough to get picked No. 10 overall in the NBA Draft.

Rivers was drafted by New Orleans, where he played for two-and-a-half seasons before being traded to the Los Angeles Clippers. In Los Angeles, Rivers found his groove under head coach and general manager Doc Rivers, who, of course, is his father.

Rivers had his best year as a pro with the Clippers in 2017-18, tallying 15.1 points and 4.0 assists per game. But with Doc Rivers losing his executive role in Los Angeles, Rivers signed with the Washington Wizards a year later. He was traded to the Phoenix Suns after just 29 games and subsequently waived. He signed with the Houston Rockets after clearing waivers, where he reestablished his career over two seasons as a spark plug scorer for the Rockets’ second unit.

But then Rivers surprised many by signing with the New York Knicks prior to the 2020-21 season – and he played well in the first few weeks. He scored in double figures during four of his first seven games with the Knicks, including a 23-point effort in which he scored 14 consecutive points in the fourth quarter. It appeared as though Rivers had found a home and it looked like he was a necessary part of the Knicks’ short-term future.

As much as Rivers made sense for New York, New York never made sense for Rivers. They were clearly more than a piece or two from competing, while Rivers is at a place in his career where he’s best utilized in a supplemental role to serious talent. Such harmony enables him to compete with the freedom to score off the bench, but not too much responsibility – ultimately, Rivers isn’t a solid enough defender or creator to warrant a lead role on a contender. Further, Rivers signed a three-year deal worth $9.9 million, giving the Knicks incredible power to trade him without possessing the ability to cash in on the good play.

But Rivers looked great in his short time receiving minutes, demonstrating an elite scoring ability at least once in early January. And, through ups and downs, he remained professional, always holding himself accountable, even when commenting on things beyond his control.

But the Knicks traded for Derrick Rose in mid-January, who assumed most of Rivers’ minutes. Last week, Rivers was traded to Oklahoma City at the deadline and he was waived almost immediately.

It’s probably disorienting to be traded and waived, again. But as is always the case, much of the league is on a perpetual audition. But Rivers played his part well during his time with New York. He proved that he has something left to give. And while lots of teams would probably like to add him – if for no other reason than to keep him away from other rosters – three teams, in particular, need him more than most.

According to The Athletic’s Shams Charania, the Bucks are heavy favorites in the Rivers’ sweepstakes with mutual interest from both parties. It would appear that minutes will be relatively tough to come by for Rivers in Milwaukee – but if recent trends are an indication, contenders stockpile assets and work out playing time later.

The Lakers can be assumed to be in the mix for just about every player that clears waivers this year. First of all, they need support over the next four-to-six weeks to make the bleeding stop from the LeBron James-Anthony Davis absences. Even with Davis expected back relatively soon, the Lakers need help in the play-making department. Rivers checks that box.

Additionally, as the presumed Western Conference favorites, the Lakers will be looking to get quality players off of the market for another two reasons: even if they help out in one game, it can impact how the season plays out; but, potentially more importantly, it prevents them from helping another contender. Adding Rivers might not improve the Lakers’ game-in and game-out, but it makes them deeper and ensures they can get through a tough time (e.g., right now).

Rivers wasn’t the only player on the move last Thursday. Portland was active, too, trading Rodney Hood and Gary Trent Jr. to Toronto for Norman Powell. Naturally, Powell will assume serious playing time with the Trail Blazers. He averaged 30.4 minutes in Toronto through 42 games in 2020-21, averaging 19.6 points per contest. He upped his performance in his first outing with Portland, posting 22 points over 36 minutes in a win against the under-manned Orlando Magic.

But there’s still a lot to make up. Trent averaged 15.0 points in 30.8 minutes per game and Hood averaged 4.7 over 19.1. Hood was still acclimating to the NBA after returning from a torn Achilles tendon last December. Moreover, Hood was good for 11 points in 29.5 minutes per game last season. And that is why the Trail Blazers need Rivers – because they’re not just making up for Trent’s production, they’re also making up for what Hood gave them prior to this season.

It’s also not as though Portland is incredibly deep at guard. They have Damian Lillard, CJ McCollum and Anfernee Simons – and that’s really it. Rivers could play a pivotal role for the Trail Blazers, catapulting them into another tier simply by adding quality depth. Further, his work ethic and disposition are perfectly suited for the gritty, hard-working Portland franchise, who are chomping at the bit to take another step forward, having been eliminated in the first round of the playoffs in three of the past four seasons.

We’ll know even more about where Rivers wants to go soon, with a decision expected shortly. Wherever he goes, Rivers will have an impact. And whichever team he chooses will receive a scrappy veteran that knows his role and does it damn well down the stretch.