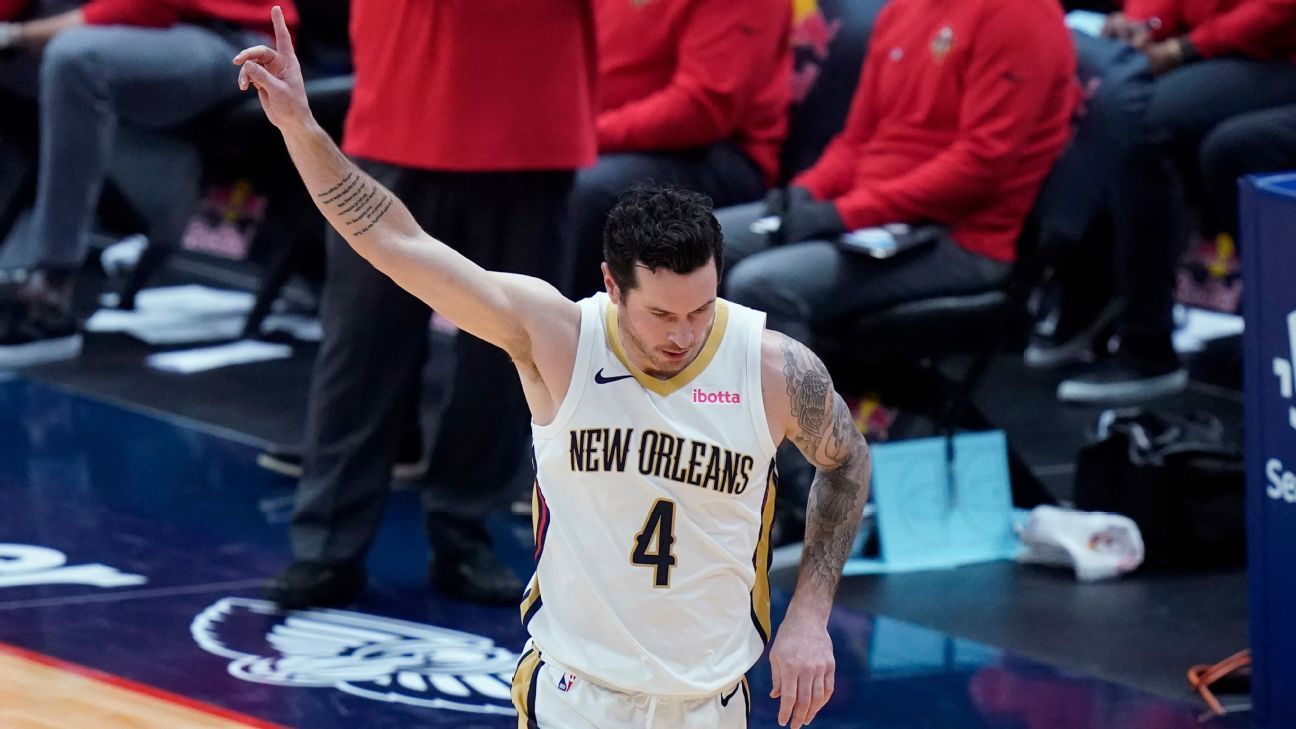 JJ Redick criticized the New Orleans Pelicans front office for how it handled his trade to the Dallas Mavericks at last week’s deadline, saying that Pelicans executive vice president of basketball operations David Griffin “did not honor his word” to help put Redick in a favorable situation where he would be closer to his family.

Redick’s comments were made on his The Old Man & The Three podcast released Wednesday. Redick, who signed a two-year, $26.5 million deal with the Pelicans as a free agent in summer 2019, said he first requested to be dealt last November for several reasons, one being a desire to be closer to his family in Brooklyn, where his son was starting kindergarten and would not be able to travel to New Orleans because of quarantine rules at the school. Another reason was the Pelicans trading away guard Jrue Holiday, who Redick said was one of the main reasons he wanted to play in New Orleans in the first place.

He expressed all of this to Griffin and general manager Trajan Langdon. Redick said that while his agent handled things, he also talked with Griffin personally.

“I talked to Griff. I talked to Trajan. Griff basically says to me, ‘Come down for a month. If you still want to be traded, I give you my word, I’ll get you to a situation that you like.’ We had four subsequent conversations,” Redick said. “Again, my agent talked to them. But I’m talking to Griff directly. Griff and I had a personal relationship.

“Obviously, he did not honor his word.”

When asked specifically by podcast co-host Tommy Alter if he thinks players will be able to trust the Pelicans’ front office moving forward, Redick was blunt.

“Truthfully — and it’s hard for me to admit this — I think I was a little naïve in thinking that because I was in Year 15, and I had at least attempted to do things right throughout my career and I honored my end of the bargain, but in terms of this front office, yeah, it’s not something where I would expect certainly the agents that worked on this with me to ever trust that front office again.”

Redick said it was his understanding that once he was not dealt at the aggregate deadline on Feb. 2, he would be bought out and allowed to go to a team of his choosing. Redick wanted to be dealt to a team in the Northeast, where he could be closer to his family in Brooklyn.

“I look at the buyout situation not as, ‘Oh, I’m going to be bought out and go to (the) Brooklyn (Nets),” he said. “I just wanted to be able to, on an off day, go see my family and be within driving distance.”

Redick said he will join the Dallas Mavericks on Thursday when the team reaches New York City, as they are scheduled to play the Knicks on Friday. He will continue to rehab on his own in New York before rejoining the team at a later date.

Redick said he made it clear in a conversation with Mavericks owner Mark Cuban that he wasn’t upset with Dallas in any way, and said he’s excited about playing with “two transcendent young players” in Luka Doncic and Kristaps Porzingis.

When asked about the Redick trade last week, Griffin, while recognizing the strain COVID-19 has placed on families, said the team spent the “vast majority” of the year trying to put him into a spot where Redick’s family was.

“We did spend a great deal of time trying to put JJ closer to home. When it became clear that the teams that were in the best position regionally for him were not necessarily the most aggressive in landing him, we did have conversations about the importance of immediately contending as he’s aging,” Griffin said on March 26.

“I think we felt confident that JJ welcomed the better contending opportunity because we’re not even at the play-in at this point. We felt it was the right thing to do for him and his family.”

“(JJ) had some things that he wanted to happen. But I think Griff cared very much about what JJ wanted, but he has a responsibility to Gayle Benson and to the organization that supersedes all of that,” Van Gundy said.

“Listen, the one thing with me — and I think I’ve been consistent about this throughout my career — is you’ll hear people say it from time to time that it’s a business; well, it is. Players are going to want to do what’s best for them and they have every damn right to do that, and organizations have every damn right to do what’s best for their organization. I have problems when it gets skewed that it’s a business from my end, but you should not be a business on your end. That’s not right. It’s a business on both ends of it.

“Everyone should do what’s best for them. That part of it, the business part of basketball, when you’re talking about trades and free-agent signings and contracts and all of that — everyone should do what’s best for their interest. Unfortunately sometimes, what the player wants and what the team wants diverge. That’s unfortunate, but that’s just part of the way it is.”