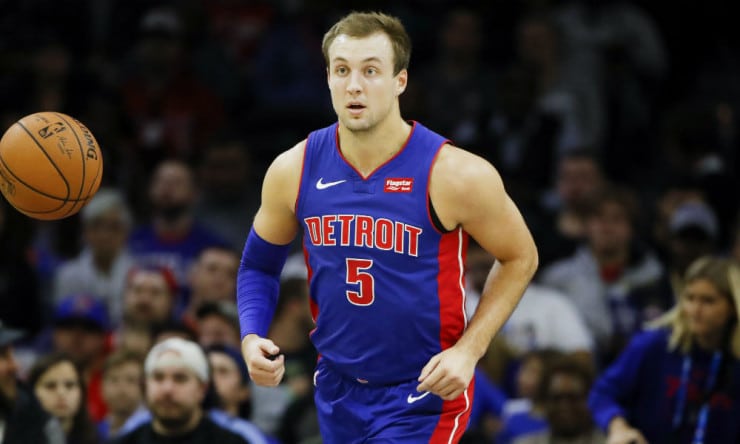 Though it may seem like forever ago, it has only been nine years since the Oklahoma City Thunder were playing in the NBA Finals. The young quartet of Kevin Durant, James Harden, Russell Westbrook and Serge Ibaka was unable to stop the Miami HEAT’s “Big Three,” as the team captured their first of two consecutive titles.

After four trips to the Western Conference Finals in the last decade, the Thunder now are in the midst of their first true rebuild since their time in Oklahoma City began. General manager Sam Presti has been a very busy man over the past few seasons. In fact, there were five players from the All-Star game this season that once played for the Thunder.

Horford plans to remain w/ OKC teammates and train at the team’s facility. After season, Horford will have 2 years, $53M left on deal and Sam Presti has pledged to work w/ Horford and his agent Jason Glushon on finding a destination that fits better with this stage of his career. https://t.co/TjNoJ4w2zE

Though many of those were brief stops, it has paid off for the franchise in terms of acquiring young talent like Shai Gilgeous-Alexander and, of course, plenty of future draft compensation.

After a couple of moves before last week’s trade deadline, the Thunder now project to have 34 draft picks over the next seven years. That is 17 first round picks and 17 second round picks, with a few swap options along the way as well.

The Thunder currently have 13 players on their roster with less than three full years of NBA experience. Oklahoma City will certainly not use every one of these 34 picks on players. This is where they will need to remain patient as they construct their roster over the coming years.

The most coveted asset that any franchise can possess is future draft picks. When these teams are bad, their own picks become even more valuable. Teams will come calling when it is time for them to rebuild and/or reload their rosters. This is the key to Oklahoma City’s future.

Two critical areas for small-market teams are player development and their ability to make smart draft decisions. The Thunder have demonstrated the ability to be exceptional at both. Darius Bazley, Luguentz Dort, Ty Jerome, Theo Maledon, Isaiah Roby, Moses Brown and Kenrich Williams have all impressed this season, while the continued growth of Gilgeous-Alexander and Dort will be instrumental going forward.

In terms of financial flexibility, the Thunder are in an excellent position, too, due largely to their creativity. The work of their front office has been nothing short of magnificent.

The Thunder now have the below big trade exceptions available:

The Thunder are in a good position in terms of player contracts as well. Aside from Horford, they do not have a player on their roster making more than $7 million this season. Darius Miller and Justin Jackson are the only other two players making more than Gilgeous-Alexander’s $4.1 million salary. They have even more money coming off their books next season and still have Gilgeous-Alexander, Dort and Brown under contract.

Oklahoma City’s draft history should provide their fan base with confidence as they proceed to rebuild. Dating back to their days in Seattle, this franchise has hit on the draft seemingly every year. In addition to Durant, Westbrook, Ibaka and Harden, they have done well with first-round selections.

These picks have not all been the same caliber as those MVP-level players but guys like Adams, Jackson and Cameron Payne were solid contributors. Though the players were traded, their last two first-round picks of Brandon Clarke and Immanuel Quickley look promising as well.

The Thunder have made the playoffs every year since 2009 with the exception of the 2014-15 season. There won’t be any postseason play for them this year but they have not embraced any form of tanking.

Despite the lack of elite talent on their roster, the Thunder still own a better record than seven other teams. Mark Daigneault may be the least recognizable coach in the league, but he has done an outstanding job with this young group. They have proven to be one of the better defensive teams as the players have bought into the system.

Oklahoma City’s situation is similar to a few other teams in recent years. The Memphis Grizzlies continue to improve each season with Ja Morant and Jaren Jackson Jr leading their young core. They have hit on those same two key areas; drafting and player development. De’Anthony Melton, Dillon Brooks, Kyle Anderson and Clarke have all contributed to their growth as an organization.

The Atlanta Hawks are another young team on the rise but are a little further ahead thanks to some recent trades and free-agent signings. Trae Young, John Collins, De’Andre Hunter, Cam Reddish and Kevin Huerter have all blossomed alongside the veteran players added to the roster. These guys benefited from the guidance of Vince Carter in his final two seasons in Atlanta.  Oklahoma City now hopes that Horford may be able to provide the same thing to their young nucleus.

Philadelphia took a much different approach when they coined their “trust the process” phrase. Tanking is no longer viewed as a path to rebuild, due to several changes that the league has made. The New Orleans Pelicans and Charlotte Hornets have also taken different angles to rebuilding their respective teams.

There is no standard way of rebuilding that is set in stone for every franchise to follow. Because of their assets and youth, the Thunder have the luxury of being patient throughout the entire process.

Over the next several years, Oklahoma City will focus on the draft and explore the idea of taking on reclamation projects similar to what the Brooklyn Nets have done. When the time is right, they will be able to cash in some of their remaining assets to acquire even more talent to put them back into contention.

This is Presti’s 15th season as general manager of the organization. He has garnered a wealth of compliments and praise for his collection of assets in recent years. While it is well deserved, the expectations are that he will be able to turn this into premier talent.

It is a tall order for anyone, but the Thunder can sleep easy at night knowing that they have the right man for the job.

Anthony Davis injury sounds the alarms for Lakers with tough look-ahead
Stephen Curry hilariously accepts $2K fine in exchange for win
Thousands of Students From Across The Americas Join Forces to Bring Global Connectedness to the Sports Field
The Clippers are committed to the Kawhi experience — for better or worse
The Whiteboard 1-on-1 NBA Power Rankings: The best bucket-getters