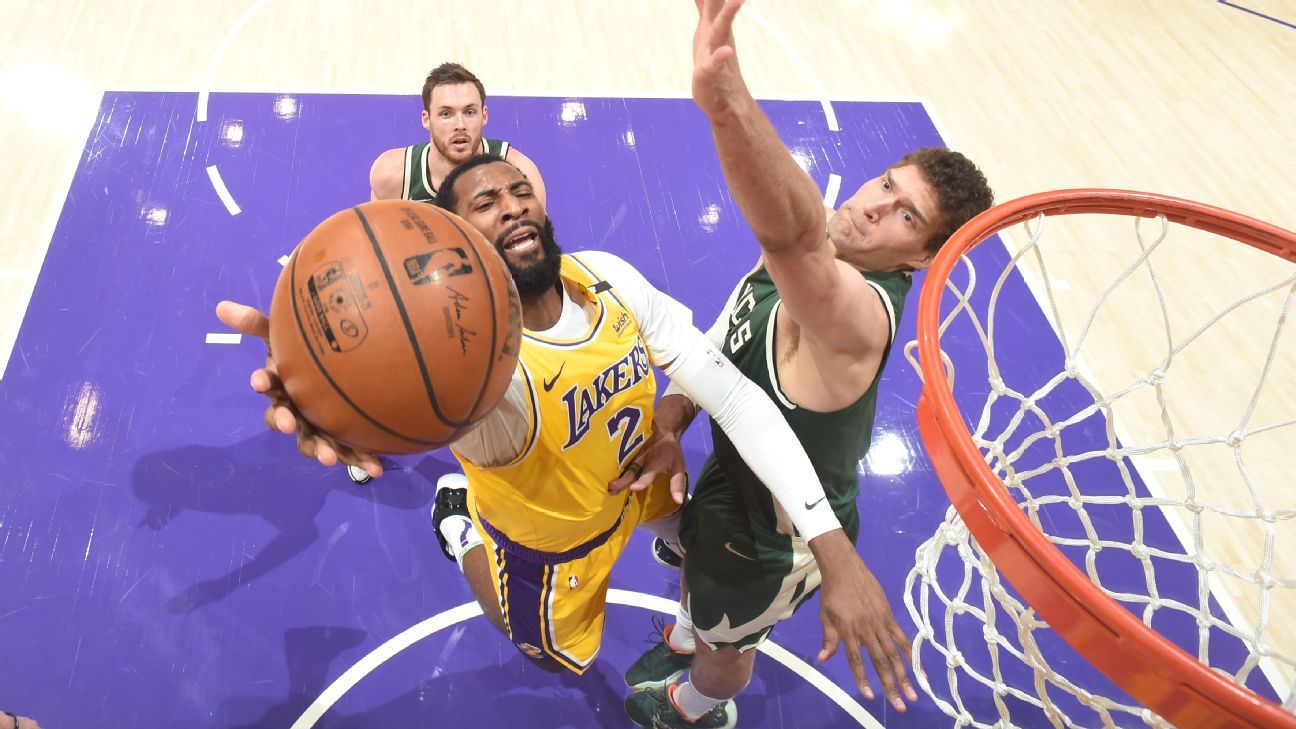 With the NBA season nearly two-thirds complete, teams are now reconfiguring their depth charts and expectations after a wild flurry of trade deadline moves and buyout signings.

While big names such as Kyle Lowry and Lonzo Ball didn’t change rosters, former All-Stars Victor Oladipo and LaMarcus Aldridge now find themselves elevated onto contenders. Meanwhile, the defending champion Los Angeles Lakers brought in some frontline reinforcement by signing Andre Drummond, who promptly left in his debut with a toe injury.

Do the Lakers have enough to escape the play-in game and get back to the NBA Finals? What deadline deals will be the most impactful? Our NBA Insiders answer the big questions and look ahead to possible scenarios involving the postseason.

1. What are you watching most closely between now and the end of the regular season?

Kevin Arnovitz: The implementation of the play-in tournament will lend some intrigue to various cusps of the playoff picture. There are real repercussions to not finishing in the top six, and being within shouting distance of No. 10 seed will extend the season of several teams who’d normally have packed it in. Still, the biggest question facing teams with any aspirations for a title is arriving at the postseason starting lineup with a clean bill of health.

Tim MacMahon: The health and performance of the superstars who are currently recovering from injuries. Can Joel Embiid, who was in the midst of his most dominant season, return to MVP-caliber form when he comes back from the bone bruise in his left knee? Once Kevin Durant finally returns from his hamstring strain, how much of a boost will he give Brooklyn? Will Anthony Davis (Achilles/calf) and LeBron James (high ankle sprain) look like themselves? The answers to these questions could be major factors in determining the Finals matchup.

Bobby Marks: It has to be the MVP race. Although I don’t have a vote, there are three criteria a player has to check when it comes to who should win MVP: overall play on the court, team success and durability. If you go by those three factors alone, the top five right now are James Harden, Giannis Antetokounmpo, Nikola Jokic, Damian Lillard and Donovan Mitchell. Although unfair, the injuries to LeBron James and Joel Embiid should eliminate the two when it comes to MVP consideration.

Royce Young: How teams approach the schedule crunch. There are already a number of contenders dealing with injuries to key stars, but as the regular season winds down and the games pile up, how will teams approach seeding vs. rest? And will players like LeBron and Embiid push for something like an MVP after they return, or ease back with an eye on the postseason? After the shortest offseason in sports history, wear and tear will be a big topic around the league.

2. Which trade deadline or buyout move will make the biggest positive impact this season?

Young: The Nuggets adding Aaron Gordon is a significant roster upgrade. Denver has been missing the versatility Jerami Grant added to lineups, and Gordon recreates a lot of that. He can guard 1-through-4, allowing Michael Malone to put together different combinations based on matchups. The Nuggets have not carried over momentum from the bubble, riding a wave of inconsistency much of the season. But they are straightening out now, and Gordon could bump them back up a level.

Arnovitz: For the regular season, acquiring Andre Drummond gives the Lakers an innings-eater who can keep them afloat in the top six until the returns of LeBron and AD. In recent years, the playoffs have been inhospitable to big guys, but with Utah and Denver in the mix, Drummond could be a key figure in a tough series.

Bembry: LaMarcus Aldridge and Blake Griffin to Brooklyn. Even with KD’s injury, the Nets were playing championship-level basketball. KD’s return and the addition of Aldridge and Griffin potentially puts the Nets over the top. Potentially. You have to wonder how much Griffin has left and how Aldridge — a back-to-the-basket player — fits in on an offense that’s at its best when there’s constant movement. This is a case of Aldridge and Griffin not having to be great to help the team. They simply have to stay out of the way.

MacMahon: A franchise that features an MVP-caliber star in his prime needs to be aggressive. The Nuggets pounced on the chance to add Gordon to Jokic’s supporting cast. You shouldn’t judge Gordon solely off box scores, as he’ll be the Nuggets’ fourth offensive option. Denver needed him on defense, providing a long, athletic presence who will be given the challenge of guarding the LeBrons and Kawhis a West contender comes across in the playoffs.

Marks: The Gordon trade to Denver. The Nuggets took a giant leap from a Tier 2 (first-round exit) to Tier 1 (championship level) team when they subtracted Gary Harris and R.J. Hampton for Gordon. Although it cost them a 2025 first-round pick, the Nuggets front office looked in the mirror and realized that the MVP season of Jokic would have been wasted if they did not upgrade their roster at the deadline.

3. What percentage chance would you give the Lakers to avoid a play-in game?

Marks: 90%. Look, the Lakers don’t resemble a championship team with LeBron James and Anthony Davis sitting on the sidelines. However, the reality is that Dallas and San Antonio — the two teams that sit at no. 7 and 8 — have not been consistent enough this season to give you a belief that either team can go on a prolonged winning streak.

Young: 99%. They are stabilizing well enough and getting by, and the schedule is tough, but not overwhelming. It’s only likely another couple of weeks until reinforcements arrive and just staying as close to a .500 clip until then should do the trick.

Arnovitz: 55%. The Lakers play 11 of the next 14 games on road (including one at the Clippers in an empty gym), with two of the three home games coming against league-leading Utah. They have a four-game lead in the loss column against Dallas, which has a much easier schedule. LeBron’s return is the variable here — can he get back in time to fend off the competition?

Bembry: 99.9%. The Lakers were able to build enough of a cushion (currently fourth in the West, five games separated from a possible play-in scenario) to allow themselves a few weeks without LeBron and Davis. The addition of Drummond should help keep the Lakers afloat. Should the Lakers get close to that play-in spot, expect James to return. The injury to James might help the Lakers in the long haul: expect him to be well-rested for another run at the title.

MacMahon: Let’s go with 75%. It would still require quite a steep fall, but it certainly isn’t out of the realm of possibility considering the Lakers’ struggles during the absences of AD and LeBron. But the Mavs, sitting at No. 7 in the West standings, haven’t made escaping the play-in pack their top priority. Dallas has been resting Luka Doncic and/or Kristaps Porzingis on one end of back-to-backs — and there are eight back-to-backs left on the Mavs’ schedule.

4. Which play-in matchup do you most want to see?

MacMahon: Sign me up for all the Steph vs. Luka games I can get. I was in attendance at the American Airlines Center on Feb. 6, which might have been the most entertaining game so far this season, featuring Stephen Curry and Doncic combining for 99 points in a 134-132 shootout the Mavs won. The Warriors and Mavs might not be real contenders right now, but Golden State could be a first-round matchup problem if healthy.

Marks: Luka against Steph in the Western Conference. I honestly believe that Sacramento will catch Golden State for the final spot but a win-or-go-home game featuring two All-NBA guards would be the highlight of the play-in tournament.

Arnovitz: Warriors vs. Lakers. This iteration of the Lakers has never played an elimination game. A LeBron-Steph showdown in a do-or-die scenario would be high drama.

Bembry: Boston vs. Miami. Before the season, any sane person would have had the Celtics and Heat among the top 10 teams in the league. The combo of Jaylen Brown and Jayson Tatum in Boston represented the NBA’s future, and the Heat were coming off an incredible run to the Finals. No one could have imagined both teams hovering around the seven/eight spots in the East.

5. Has your NBA Finals prediction changed?

Bembry: I had Lakers over Sixers, but now I’ll take Nets over Lakers. Even when the Nets picked up Harden, I had doubts about whether the move would work. It was hard to imagine a scenario in which Harden, Kyrie Irving and Durrant could successfully share the ball. The trio, in the few times they’ve played together, has thrived. The addition of Aldridge and Griffin is just icing on the cake. For the Lakers, I see the Anthony Davis injury as more problematic than LeBron’s. If both come back healthy and rested, the Lakers should find themselves in the Finals once again.

Who is No. 1 in the latest NBA Basketball Power Index? Go to Ratings

MacMahon: I’m not ready to abandon my prediction of the Lakers repeating, though that clearly will require their superstars to get healthy and perform at their typical Hall of Fame levels. But I’m not betting on the Bucks anymore. Brooklyn became the East favorite as soon as Harden’s flight from Houston landed.

Marks: There is no reason for me to change my mind on Lakers over Nets now. For one, the Nets are a better basketball team today than when the season started in December. In the past three months, Brooklyn has added an MVP candidate in Harden and improved their depth with the additions of Aldridge and Griffin. Although they have dealt with their fair share of injuries, the Lakers have a championship pedigree and I am not betting against LeBron and Davis come playoff time.

Young: I’m good with sticking with the Lakers in the West. But the Nets have done too much and evolved into a swamp monster that has every prediction back-pedaling. Sure, there are some health questions around Durant, and there’s curiosity around chemistry and fit, but talent stacked on talent typically wins, and the Nets have it all. I’ll take them over the Bucks now.

Arnovitz: I retired from predictions some time ago because in 30 years of grocery shopping, I’ve yet to pick the quick line. I think it was Nassim Nicholas Taleb who said the more we try to squeeze randomness out of modern life, the more unpredictable it becomes. He probably has the Bucks in 7 over the Lakers.