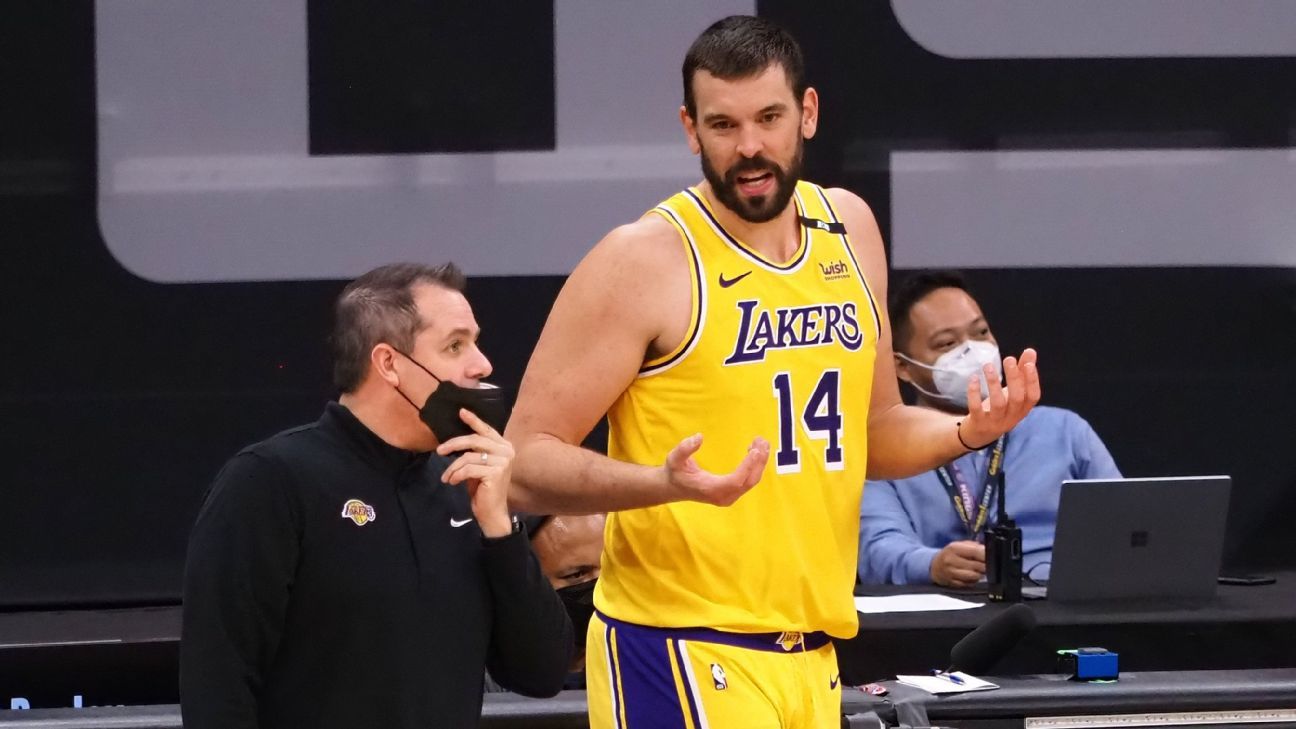 Los Angeles Lakers center Marc Gasol admitted Friday night that he has been questioning his place on the team since Andre Drummond was added from the buyout market last weekend.

Drummond was named the starter almost immediately after he arrived, and Gasol was relegated to the bench on a team that already has Montrezl Harrell, one of the leading Sixth Man of the Year candidates, playing backup center.

Gasol, speaking after the Lakers’ 115-94 win over the Sacramento Kings on Friday, said he he was unsure how often his number will be called with Drummond in the fold.

“I think there’s an ‘if’ — ‘if’ they need you. And it’s a big ‘if,'” Gasol said when asked about Lakers coach Frank Vogel repeatedly stating Gasol’s continued importance. “You’re not Plan A right now. You’re Plan C, D. … You have to accept it because that’s your job. And that’s what you sign up to do. It’s never easy to accept that.”

With Drummond out of the lineup against the Kings, recovering from a torn nail on his right big toe, Gasol, 36, was thrust back into the starting lineup and contributed five points, nine rebounds, six assists and a steal. His assist total was second-most on the team, behind only point guard Dennis Schroder‘s eight, and L.A. outscored Sacramento by 20 points in the 28 minutes Gasol was on the floor.

“I think people need to understand how good of a player Marc Gasol is and how valuable he is to what we’re doing,” Vogel said afterward. “And we’re going to play our most important players, so he’s going to help us win a championship this year. That’s the plan. That’s the vision. Obviously Andre coming along gives us the depth. But we’re going to need all three of those guys. We stated that from Day 1 and Marc is one of our most important players. He dominated the game tonight with five points, OK? And this is what Marc brings to the table.”

Gasol had previously declined speaking to reporters three times since L.A. signed Drummond and was clearly still harboring some frustration about the franchise’s decision Friday when breaking his silence on the move.

“Things can change quickly in the NBA just as they have changed for me,” Gasol said when asked if he wanted to stay with the Lakers or seek a buyout of his own. “But, I’m committed to this team. It’s a hard pill to swallow because I know I’m going to be out of the lineup at some point. It’s never easy on a player. As a basketball player, you want to play. You want to contribute, especially when you made that commitment for that reason. But, we’ll see.”

Gasol signed a two-year contract with the defending champion Lakers in the offseason to follow in the footsteps of his older brother, Pau Gasol, and help L.A. hoist another Larry O’Brien Trophy. His intention was to not just be a part of a championship team, but to play and have his skillset elevate the entire group in its pursuit of the ultimate prize.

He came into Friday averaging career lows in points (4.8), rebounds (3.9), field goal percentage (40.3%) and minutes (19.5) and recently dealt with contracting COVID-19, which caused him to miss nine straight games.

As Vogel alluded to, Gasol’s value to the Lakers was more about the team’s overall performance than his individual numbers, with the team ranking No. 1 in the league in defensive efficiency for the majority of the season with the former Defensive Player of the Year manning the middle.

“You ask if you’ve done something wrong when you try to do everything for the team,” he said. “It’s pretty obvious I don’t care much about my stats and the shots that I get or rebounds that I get. I try to box my guy out and make the next play, help everyone out. It’s not easy. But it’s life. You have to adapt. Like I said, either you take it as a challenge or you move on.”

Vogel maintained that Gasol will continue to have a role in L.A. and detailed how he and the organization will rally around him while Gasol adjusts to the lineup shuffle.

“The approach is full support,” Vogel said. “It’s difficult to see that your role is going to change: how can we support you? And make sure that they understand that they are a vital piece, like Marc is a vital piece to us winning the championship this year. And there’s no other way to look at it other than that.”