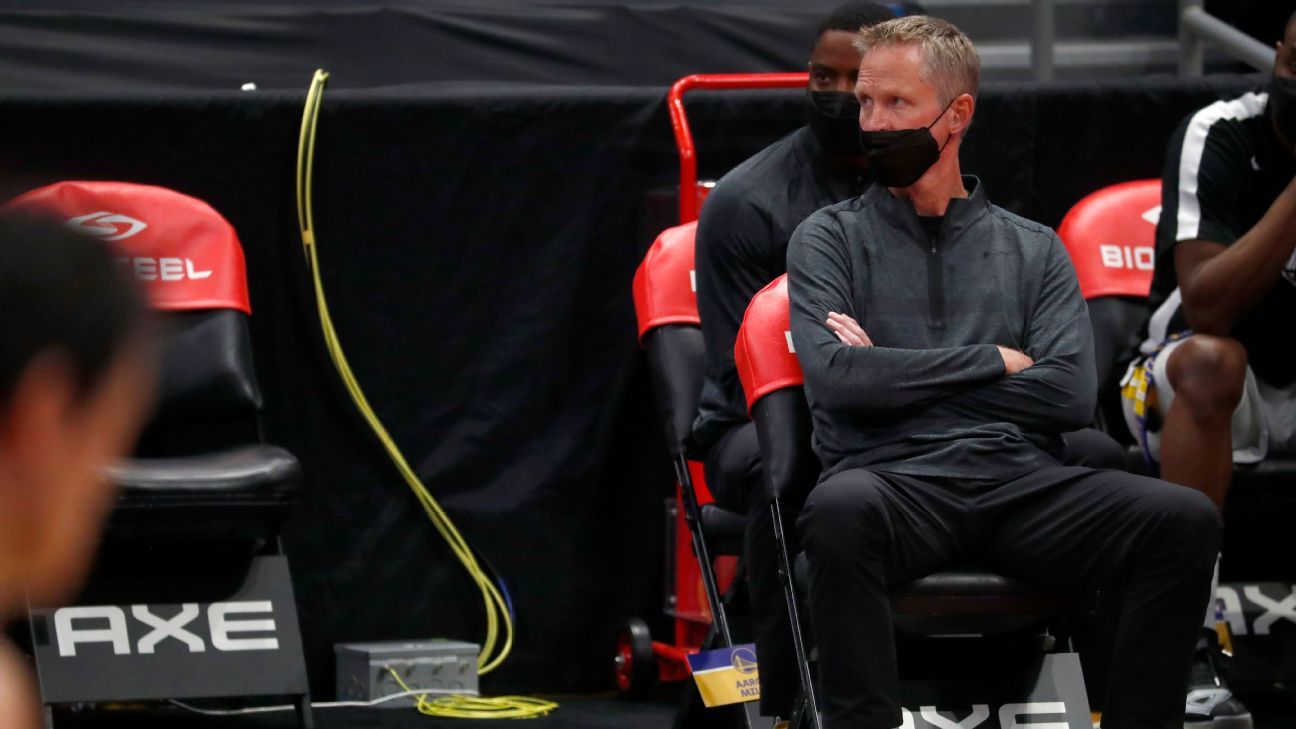 The Golden State Warriors suffered one of the most “humiliating” losses in franchise history Friday night during a 53-point defeat at the hands of the Toronto Raptors — a team that came into the game having lost 13 of its last 14 games.

“You saw it,” Warriors coach Steve Kerr said after the 130-77 loss. “We just got destroyed. Not a whole lot to be said. Humiliating for everybody involved.”

The Warriors, who trailed by as many as 61 points in the second half, set some dubious marks in a game where both Stephen Curry (tailbone soreness) and Draymond Green (left finger sprain) sat out.

The Raptors outscored the Warriors by 51 points in the 2nd and 3rd quarters, the largest point differential over a two-quarter span within a game in NBA history, according to Elias Sports Bureau. The Warriors became the fourth team in the last 25 seasons to trail by at least 60 points in a game, according to ESPN Stats and Information. The Raptors’ 53-point margin of victory is also tied for the third largest in league history by a team that is 10 or more games below .500.

“I just think the game went south on us quickly and we got demoralized,” Kerr said. “I think without Steph and Draymond out there I think we were a little bit rudderless when things went south. We didn’t have the internal fight that we needed to kind of get over the hump.”

That was evident in a variety of different areas, but offensively, the stat that may be most jarring for the Warriors is the fact that they became the only team in the last 25 years to lose a game by at least 50 points and not score a fastbreak point. They only had one fastbreak attempt the whole game and missed it. It’s a huge reason why Kerr was so frustrated with his team’s lack of ball movement.

“Our team has been built on sharing the ball,” Kerr said. “When you move the ball in this game, that’s when the magic happens, when you build an energy, a karma, the shots tend to go in if you move the ball and you share it. And I just saw one possession after another tonight that was one pass and a shot. We’ve got to play for each other and I didn’t think we did that tonight.”

The Warriors, now 23-26, sit in 10th place in the Western Conference and have struggled all season to find consistency. Last week veteran Kevon Looney acknowledged that Curry and Green shared messages for their teammates about looking within and trying to play better. After Friday’s embarrassing performance, veteran Kent Bazemore said injured former All-Star Klay Thompson shared some frustrating thoughts with several teammates after the game.

“It’s a hard pill for them to swallow,” Bazemore said of the Warriors’ three core players. “We’re talking about — and Klay is back there as well, these guys [have] five straight Finals appearances. This is by any means not acceptable by them at all. This hurts them more than anything. Klay was fired up after the game. And this has been the toughest two years watching his guys out there, and him not being able to help. So I think it’s lit a fire up under him, and Steph and Draymond, they know how important they are to us.”

For Thompson, the loss was even tougher to watch given that he is currently rehabbing an Achilles injury that has forced him to miss his second straight season. Bazemore said Thompson’s message to a few teammates was simple in its point.

“He was just kind of going off about how he missed the game and how it’s just not acceptable to lose this way,” Bazemore said. “He’s fired up, man. It’s hard watching, regardless if you’re playing or not playing.”

The good news for the Warriors is that Curry is expected to be back on Sunday against the Atlanta Hawks. Green’s status remains unclear given that he was initially expected to play on Friday but after trying to warm up he told the coaching staff that he couldn’t catch the ball with his left hand because of the finger injury. Green told Kerr he could play, but the veteran coach made the decision for Green to sit.

As the Warriors wait for their stars to heal, they’ve got a looming issue with the young center they were hoping would help them this season. 20-year-old big man James Wiseman had another rough night against the Raptors, struggling on both ends of the floor, which has been an ongoing theme since the All-Star break. Kerr said that the Warriors would like to simplify parts of the game plan for Wiseman so that he could build his confidence back up.

“As a young player, a lot of guys try to do too much,” Kerr said. “I think that’s what’s happening with James right now. I think he’s such a gifted guy, and he’s always been able to do whatever he wanted on the floor, but the NBA, the game happens so fast that you just have to sort of strip it down to ‘let’s be good at the things that I can be good at right now and then my game will expand as we go forward.’ And that’s what we’re trying to share with James and teach him.

“But the only way to learn that is to feel it and he’s feeling it. So he will grow from here and we’ll stay positive with him, we’ll try to peel things back and keep things really simple and help him build his confidence over the last quarter of the season.”

As the Warriors hope to see more development down the stretch from the No. 2 overall pick in the 2020 draft, they do so with a group that hit the low point of its season on Friday night. Kerr is hopeful that his team will bounce back after two straight defeats, but he also understands that each individual player has to find his own motivation to get things back on track before it’s too late.