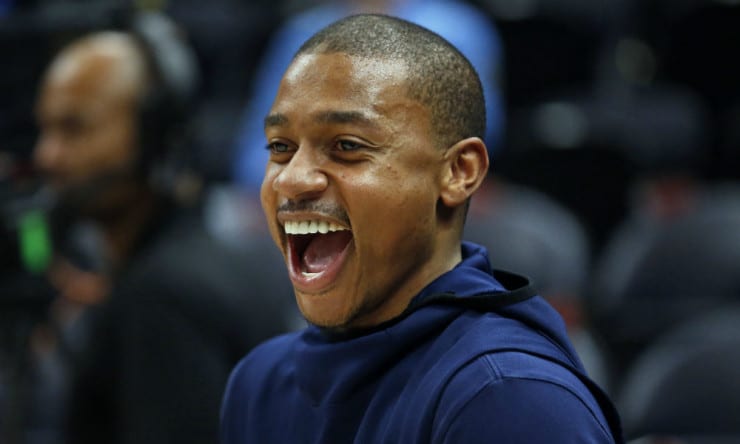 When the trade deadline passed, there were two knee-jerk questions about the moves Boston made.

1. Just Evan Fournier?
2. You traded Daniel Theis to save a few bucks?

It is true that the Celtics let a rare opportunity slip through their fingers. Aaron Gordon and Nikola Vucevic were up for bidding and Boston came away with neither. They may come to regret that, but in the face of a season that started so promising only to develop into a cascade of inconsistency, frustration and what seems like a never-ending fight with COVID-19, Boston at least confronted their issues this time instead of hoping they’d work themselves out.

From a talent standpoint, Evan Fournier, Mo Wagner and Luke Kornet wouldn’t seem like a good enough haul for a team that’s trying to do a lot more than keep its head above water. Then again, talent wasn’t Boston’s issue. Health has certainly been among the most prevalent issues, as they’ve been snakebitten harder by the coronavirus than anyone this season.

Jayson Tatum’s play since contracting the virus hasn’t slowed him down entirely, but he’s struggled mightily on back-to-backs since recovering from it. That already adds to the inconvenience of Kemba not being able to play on back-to-backs with his ongoing knee issues. Those problems have definitely played a part in Boston’s struggles.

However, the Celtics’ most glaring concern before the trade deadline was that their roster just did not mesh on multiple levels. So, when they made the moves that they did, their intentions may not have been to get the best infusion of talent on the open market, but to fill its roster holes. What holes were filled? Let’s start with their higher-rep acquisition, Fournier.

Our own Dylan Thayer already did a great job filling everyone in on what kind of player Boston would be getting with the Frenchman. Instead of rehashing what’s already been said about Fournier’s game, emphasis needs to be made on why Boston was looking for someone like him.

The Celtics offense has technically been better this year – 114.0 offensive rating – than last – 113.3 – and yet they went from the league’s fourth-best offensive rating to the 12th according to Basketball-Reference. That’s more indicative of what this COVID-shortened season has done to defenses league-wide. However, in Boston’s case, their scoring burden has been placed more on the starters than ever before.

Boston’s bench scoring as of April 3rd has the 26th lowest point average at 31.8 points a game. Last year, they were actually tied for last in that department, but they could live with it because the scoring prowess between Tatum, Kemba, Jaylen Brown and Gordon Hayward was evidently more than enough.

But of course, Hayward has since departed, which has opened the gate for Tatum and Brown to reach their potential as scorers. However, losing someone that could do what Hayward did can’t be shrugged off. Enter Evan Fournier. Fournier projects as a Hayward replacement. A two-way scoring swingman capable of putting up 18-25 points while also handling some of the playmaking responsibilities.

Fournier’s not as good as Hayward is, but he is more of a natural fit than Hayward was as the fourth option in the offense. His abilities should also come very much in handy for a Celtics team that has had to play through Kemba’s knee issues and Tatum’s struggles on back-to-backs. He’s a scoring cushion both for the two of them and for the second unit that anyone with eyes could see they craved.

Here’s a good summation of what Fournier does for the Celtics. Let’s take a look at Daniel Theis’ final shot in a Celtics uniform.

You can’t really complain too much about the quality of that shot. Theis was wide open and he barely missed. The problem is, the Bucks were perfectly okay with him taking that shot at the buzzer. Theis hasn’t been a bad three-point shooter this year – 34.7 percent – but he’s not a threat from distance. And here’s the bottom line- neither is Semi Ojeleye. Neither is Aaron Nesmith. Neither was Javonte Green. Romeo Langford has barely played. Grant Williams has been hitting threes with pretty good accuracy – 39.5 percent – but he only takes two a game, meaning the Celtics have yet to weaponize it. Teams would let the Celtics’ supporting cast of wings shoot threes until they can consistently make them pay for it. Fournier is in a different ballpark.

Before coming to Boston, Fournier was shooting almost 39 percent from three on 7.2 heaves a night this season. He did that when defenses could focus more on stopping him in Orlando than he will in Boston now that he’s around better offensive talent. The Celtics finally have a three-level complimentary scorer that will take the pressure off of their four best players.

Then there’s the Daniel Theis trade.

The Celtics really tried to make their three big rotation work, in part because they didn’t really have a choice. They had three bigs on the roster that were all best used as centers who needed a healthy 20 minutes a game between Theis, Tristan Thompson and Robert Williams III. Their solution for that was to start Theis and Thompson.

Those two didn’t start out great together, but it got better. Still, it wasn’t a pairing that proved beneficial for the team. The two shared the court for a substantial amount of time (375 minutes) and in that time, they mustered a plus-0.5 net rating. That’s a neutral impact at its finest. Both Theis and Boston tried their darndest to turn him into a stretch-4 full-time, but that’s just not what he’s best suited for.

On top of that, the younger and flashier Williams was starting to come out of his shell. Boston has been conservative with Williams out of concern for his hip edema that kept him out for a good chunk of last season. The edema and contracting the coronavirus has gotten the way of his availability, but only to a minor degree. This season has given us our first real extended look at Williams and it’s been pretty telling. The best way to convey Williams’ growth is to compare his current per-36 stats to Theis and Thompson (per Basketball-Reference).

Outside of rebounding, Williams had Theis and Thompson beat by a heavy margin. So, two elephants were starting to show themselves.

1. The Theis and Thompson duo wasn’t helping the team
2. Williams’ efforts showed that he was the team’s best option at center, which meant he deserved more minutes.

It was in the Celtics’ best interest to let one of Theis or Thompson go to get back on track. Theis’ contract was cheaper and expiring, so he was the odd man out. In hindsight, if Boston had a do-over knowing what they knew now, they probably would have passed on signing Thompson and used the mid-level exception on someone else. Not because of Thompson’s play, but because it was clear that they only needed two pure centers, not three.

Now they could have shuffled their center rotation so that they would only have to play two based on specific matchups. That’s kind of hard to do since they would have had to juggle their most exciting young big since Al Jefferson, their starting center on last year’s Eastern Conference Finals team and an NBA champion with an ocean of playoff experience to his name. Those three are too good to be confined to a utility role. But together, the frontcourt was clogged.

Now it’s not — and now we’re beginning to see what Timelord looks like unleashed.

He joins Nikola Jokic and Wilt Chamberlain (3x) as the only centers with a 20/8/8 game on 100% shooting in NBA history. pic.twitter.com/WaH4zCDHVP

Robert Williams as a starter this season:

Last week, Boston’s roster was a mess. They couldn’t get away with their lack of bench scoring and something had to give with their bigs. Since making their moves, the results have been mixed, There’s no telling if this will turn the season around for them or it’s going to be more of the same. For the goals that the Celtics had in mind at the start of the season, this roster definitely fits in line with what they wanted to achieve.

Note the phrasing. Their roster makes more sense now. Now, it’s on them to be better.