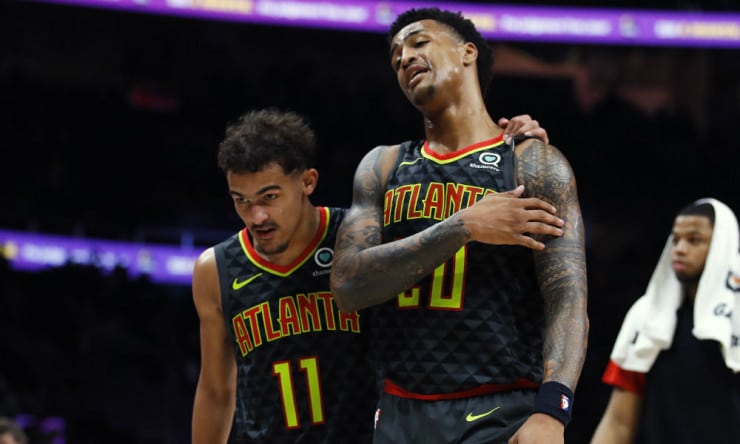 The seventh edition of The Defensive Player of the Year Watch for Basketball Insiders is here! In this week’s ranking, there’s not much change beyond the addition of the formerly-injured Philadelphia 76ers star, Joel Embiid. It’s impossible to leave him off of this list and it should come as no surprise if he ends the year as both a contender for this award as MVP. Sure, he’d have to outplay Rudy Gobert, but he’s only a streak of lockdown games away.

As the last full month of games for the NBA season gets underway, it’s time to see who else’s elite defensive play has kept them in the running.

The Utah Jazz center has been the clear frontrunner for a third career Defensive Player of the Year award, as well as his third in the last four seasons. There is no denying the fact that the Stifle Tower has been the focal point of the defense throughout their unprecedented run with the best record in the NBA. When Gobert is on the floor, it’s going to be hard for an opposing player to get an uncontested shot around the rim, and his presence is a factor night-in and night-out.

Coming off a strong month of March where he averaged 3.5 blocks per game, the Frenchman has tailed off a bit, averaging only 1.6 blocks per game midway through April. While this recent downward trend isn’t lessening his case, Gobert still holds the No. 2 spot with 2.8 blocks per game.

Diving deeper into the numbers is where Gobert really shines, however. His defensive rating is 102.3 this season, second to only Jazz teammate Mike Conley, per NBA Advanced Stats. He also finds himself third in defensive win shares with 0.166. It’s clear that Gobert is the leading candidate for another DPotY, even the likely winner barring any significant setbacks to his season.

Even the center is our clear frontrunner, Ben Simmons may say otherwise.

Ben Simmons comments on his Defensive Player of the Year race against Rudy Gobert: “I scored 42 points on him in Utah, and apparently I’m not a scorer.”

Returning from a left knee bone bruise, the 7-foot center has gotten right back to the elite level few others can match. In a matchup against the Oklahoma City Thunder, Embiid showed the NBA that he is back and out for blood. Over 27 minutes, Embiid totaled 27 points, 10 rebounds, 4 assists and 4 blocks. The star took over in a short amount of time as the 76ers trounced the Thunder 117-93 – but his defensive impact should not be taken for granted.

If Embiid can raise these numbers more in line with Gobert, he may be able to steal the award. Think about it. Giannis Antetokoumpo was able to win the award after an unbelievable season in which he won the MVP – why can’t Embiid do it too?

If not for the elite defensive play from Gobert and Embiid, Turner would be the de facto leader in the race. After being a rumored name on the trade market this past offseason, the decision to keep Turner in the fold has paid off for the Indiana Pacers. The league leader in blocks has managed to put together a great season on defense but the Pacers, and specifically Turner himself, have been hurt by injuries.

Where things stand right now, Turner has a sizeable lead in blocks per game with 3.5, 0.7 more than Rudy Gobert. It’s looking more and more likely by the day that Turner will once again be the leader in blocks in the NBA, a feat he also achieved in 2018-19.

While this is an outstanding feat for the young center, it won’t be enough to get him this coveted award – there’s always next season though.

The Jazz floor general has made his impact felt this season on both ends of the floor following a down season. Many had written off Conley and bashed the Jazz for the trade as he just didn’t look like the same player, but he has completely turned that around. Needless to say, without Conley, it’s hard to imagine the Jazz having the success they have had this season. Together, Conley and Gobert have been a nightmare for opposing offenses as they constantly apply pressure to the ball.

But the advanced statistics are what truly put Conley’s season in perspective. In the defensive rating category, Conley has been the league leader for some time now. While it has fluctuated throughout the season, he has still managed to keep an incredible 100.9 defensive rating, per NBA Advanced Stats. He also ranks second in DWS with 0.171, just .02 off the league leader, LeBron James. Conley has also been very efficient in stealing the ball as he is tied for seventh with 1.3 steals per game.

If a guard were deserving enough for this award it would be Conley, but due to the play of the guys ahead of him, it doesn’t look like he will have the strength to win it.

The Greek Freak has a had very underrated season on defense, if not overall. He hasn’t been the topic of the MVP conversation as he was the past two seasons, but his defensive presence in the paint is undeniable.

Antetokounmpo has averaged a stellar 1.1 steals and 1.3 blocks per game, all thanks to those incredible athletic abilities and length. He also ranks seventh in defensive win shares with a DWS of 0.139, per NBA Advanced Stats. His defensive rating of 106.6 also ranks in the top 15.

While the Bucks have looked like a contender out of the Eastern Conference this season – their franchise cornerstone won’t be named the winner of any awards this year.

The leader of the Miami HEAT is putting together another elite defensive season. Currently, he is the league leader in steals per game with 2.1, a lead he has held steady for weeks now. Butler ranks seventh in defensive rating with a mark of 105.4, per NBA Advanced Stats. He also ranks sixth with a DWS of 0.148. But if the HEAT surge through the last stretch of the season, Butler could earn more consideration for this prestigious award.

As the last full month of the regular season takes off, it has been clear that the Utah Jazz have the frontrunner for the DPotY award – plus another major runner-up contender to boot.

Will anyone else be able to top Gobert’s defensive output this season? It doesn’t seem likely, but anything is possible in this crazy, ever-changing landscape.