As the WNBA season gets set to tip-off, we’re debuting our new series Above the Break, digging into everything to watch for this weekend.

Welcome to Above The Break, a new column where every week I peer around the WNBA and talk about what’s going on. There’s no set rule for what that peering will look like — maybe it’ll take the form of film breakdowns some weeks, maybe it’ll be data-driven breakdowns other weeks, and maybe things will just get weird at other times. We’ll see.

The general idea will be to touch on three different things each week, hence “above the break.” There’s also an element of playfulness with the name, as the WNBA’s stats website quantifies a suspiciously high number of 3-point attempts as “above the break.” Did the Mystics, the league’s top team last year in corner 3s per game, take just 3.1 corner 3s while every NBA team took over twice that many corner 3s? Maybe! But it still always feels like something is off with the way those get tracked in this league.

Anyway, welcome to the first Above The Break. Let’s talk about the WNBA’s opening weekend of games.

The biggest WNBA game of the weekend is…

Sunday’s meeting between the Storm and the Aces. Sure, there are intriguing matchups on opening night like the Sparks visiting the Sky and the Aces taking on the Mercury, but Sunday’s Vegas/Seattle game just feels like it’s got so much going for it.

These were the consensus top two teams heading into the 2021 season, but neither made it to the Finals last season, and both teams enter 2022 with some question marks.

For Seattle, the question mark is mainly about the team’s future. After coring Jewell Loyd this offseason — essentially the WNBA version of the NFL’s franchise tag — the Storm can no longer core another player until 2024. This means that former MVP Breanna Stewart, who is arguably the best women’s basketball player in the world, is an unrestricted free agent after this season. Considering she took a meeting with the Liberty this past offseason before signing a one-year deal in Seattle, one has to wonder if this could be Stewie’s last ride with the Storm.

And speaking of “last rides with the Storm,” this is very, very likely going to be Sue Bird’s final year. The 41-year-old point guard has been a mainstay on this team since 2002 and is widely regarded as one of the best ones in the history of the league. Bird might not be the same player overall that she was earlier in her career, but she can still shoot and she can still pass.

On the other side, Vegas underwent a ton of changes this offseason, starting at the top. GM Dan Padover and head coach Bill Laimbeer are out. Natalie Williams took over as GM, while the Aces lured former Spurs assistant Becky Hammon over to the W to take the head coaching job.

Hammon brings a modern sensibility to the Aces. Under Laimbeer, this team routinely played like it was the 1970s, putting two bigs down in the paint and not taking 3s. Hammon should change that. Per team PR, the team attempted 23 3-pointers in their preseason meeting with the Lynx, which equaled the most they took in any single game during the Laimbeer era.

But those aren’t the only changes. The Liz Cambage experiment is over, as the Australian center signed in Los Angeles in the offseason. There were lots of questions about pairing Cambage with A’ja Wilson when she signed in Vegas and while the pairing worked out in 2021, with an 8.0 net rating per Positive Residual, it also didn’t really work in 2019, with a 2.8 net rating when they shared the floor, which was worse than when either played alone. Cambage and Wilson together just wasn’t something that fit the direction this league is moving.

So, now Cambage is gone. And so is Angel McCoughtry, though she didn’t play last year for the Aces.

Vegas has some great talent, especially with the backcourt, where the team has Chelsea Gray, Kelsey Plum, Riquna Williams and Jackie Young. And the Wilson and Dearica Hamby pairing should play a lot of good minutes, with the increased spacing from Hamby providing Wilson extra space to work in. There are a lot of depth concerns with this team, though. How many minutes will Kiah Stokes have to play? How many minutes can you comfortably play your fourth big, and who is that fourth big — Park Ji-su? Victoria Macaulay?

We’ll start to answer some of those questions this weekend. 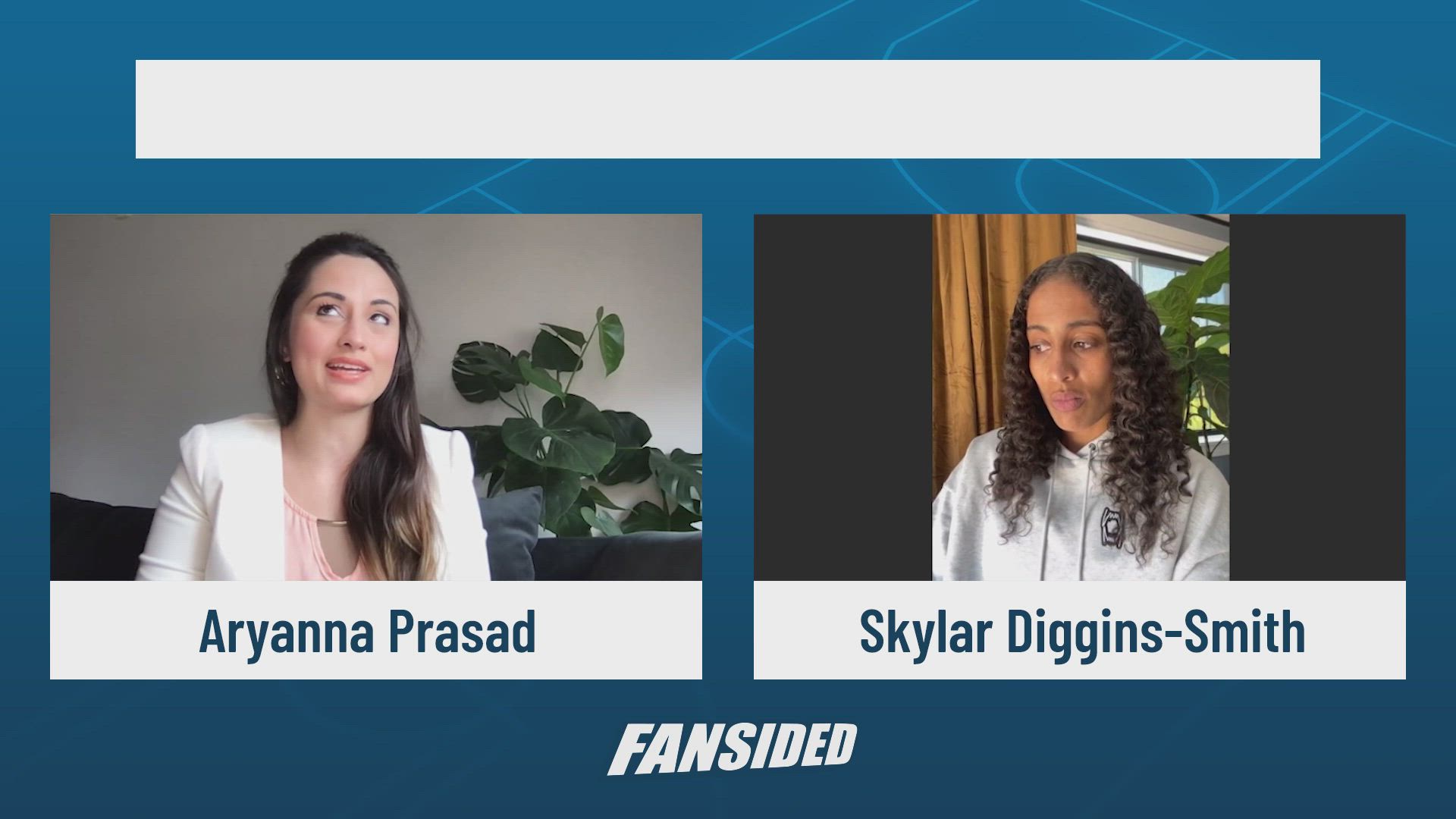 The WNBA storyline I’m most interested in this weekend is…

Indiana plays two games this weekend. Five rookies are on this team’s roster: NaLyssa Smith, Emily Engstler, Lexie Hull, Queen Egbo and Destanni Henderson. In a league where it’s hard for even one rookie to make a team, Indiana carrying five of them is interesting.

But it isn’t unprecedented. A few teams in recent years have tried the “let’s just throw a ton of rookies out there” strategy, with varying degrees of success.

The 2020 Liberty did it, with Sabrina Ionescu, Megan Walker, Jocelyn Willoughby, Jazmine Jones, Kylee Shook, Leaonna Odom and Joyner Holmes all making the team. Injuries limited Ionescu to three games and Walker to 18 games. And while veteran players made up the top four on the team in minutes, the rookies all got a lot of run, which resulted in a 2-20 season. Just two seasons later, only Ionescu and Willoughby remain from that roster.

The Wings also essentially tried this strategy in 2020 and 2021. In 2020, the team drafted Satou Sabally, Bella Alarie and Ty Harris. In 2021, the team had Charli Collier, Awak Kuier and Chelsea Dungee. The 2020 Wings played those players a good bit and went 8-14. The 2021 team kept the three rookies, but didn’t play any of them much — Collier started 18 games but somehow averaged only 12.3 minutes per night. That team made the playoffs at 14-18.

Small sample size, but the takeaway seems to be that having a lot of rookies and playing them all isn’t good if you want to win games. Still, both New York and Dallas found some good players in those drafts, so at least one or two of these Fever rookies should stick.

And that’s going to be part of the fun of this season. The 2020 Liberty were a mess, but a big part of that was the Ionescu injury. The team was fun (but bad) in the first two games. Indiana should be fun (but bad) all season if healthy.

There’s also the uncertainty factor at play. We don’t know what this starting lineup or this rotation will look like! I have Queen Egbo in fantasy and I have no idea if that’s a good idea or not because I have no idea who the Fever intend to play!

Let’s just quickly take stock of how I view all the league’s teams heading into the regular season: