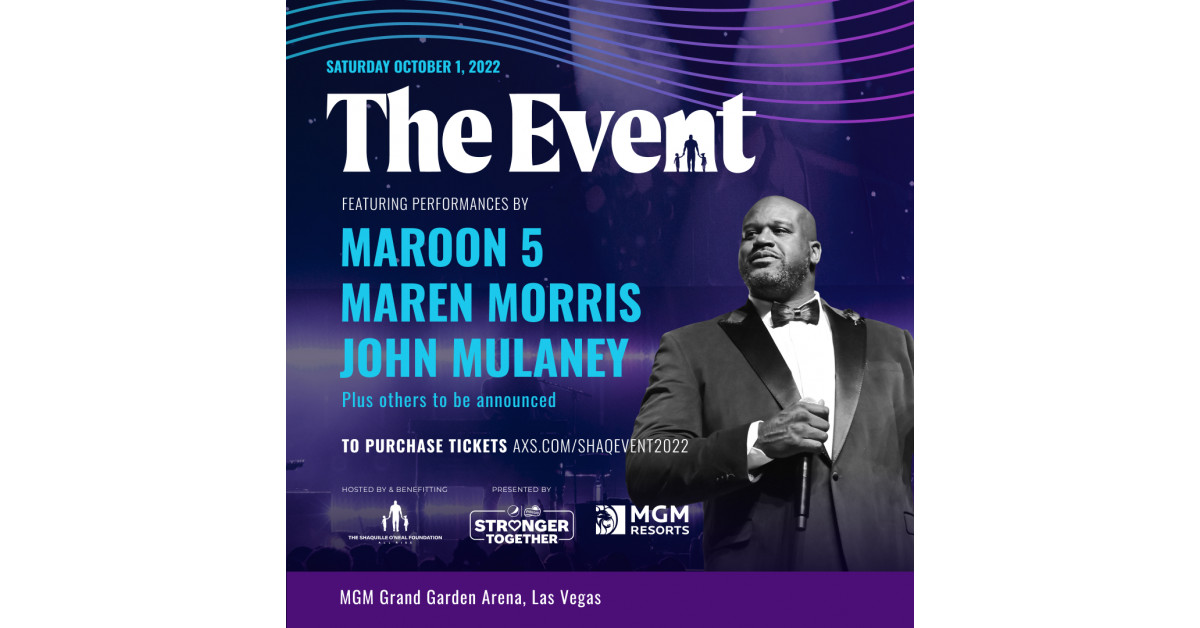 
LAS VEGAS, August 19, 2022 (Newswire.com)
–
The Shaquille O’Neal Foundation today announced details for The Event, its second annual fundraising gala presented by Pepsi Stronger Together scheduled for Oct. 1, 2022, at the MGM Grand Garden Arena in Las Vegas. The evening will feature an all-star lineup from the worlds of music and comedy, including performances from multiple GRAMMY award-winning artists Maroon 5; CMA’s 2020 Female Artist of the Year Maren Morris; and Emmy award-winning comedian John Mulaney — with more performers to be announced in the coming weeks.

Concert tickets ranging from $50 to $250 are available to the public and go on sale at 10 a.m. PT on Friday, Aug. 19, via AXS.com. The evening will also include a private cocktail reception, dinner, and live auction followed by the public performance. Table sponsorships for the private event range from $10,000 to $75,000. Additional details about The Event and ticket/table options can be found at shaqfoundation.org.

“Last year’s Event was a lifetime highlight for me, which is saying something,” O’Neal professed. ”We set the bar high but we’re looking forward to an even bigger night this year: more guests, more acts, more passion for positive change. Not only do we have some of the best names in music again, but we’re also adding comedy. I’m especially proud of how accessible The Event is, with concert tickets starting at just $50. The evening is about people — from everyday fans to sports and entertainment stars to corporate CEOs — coming together to make a difference in kids’ lives.”

The Foundation focuses on serving children in Las Vegas and Atlanta. Last year, it announced the opening of the Shaquille O’Neal Boys & Girls Club of Henry County, located just outside of Atlanta. The 2021 gala raised more than $2.9 million, providing essential support for the Club, Shaquille’s annual Shaq-a-Claus holiday program and more. Proceeds from this year’s event will support similar efforts, including a new project (yet to be announced) in Las Vegas with Boys & Girls Clubs and Communities in Schools.

“We are proud to partner, once again, with The Shaquille O’Neal Foundation to support our communities in need,” said Derek Lewis, President, PepsiCo Multicultural. “The partnership between Pepsi Stronger Together and The Shaquille O’Neal Foundation is rooted in bringing smiles where they are needed most and we look forward to continue to expand our initiatives together.”

About The Shaquille O’Neal Foundation

The Shaquille O’Neal Foundation creates pathways for underserved youth, helping them achieve their full potential. Established in 2019 by the NBA Hall of Famer, television sports analyst and entrepreneur Shaquille O’Neal, the Foundation works to instill hope and bring about change in communities, collectively shaping a brighter future for our children. While primarily partnered with Boys & Girls Clubs and Communities in Schools, the Foundation will simultaneously support Shaquille’s other charitable endeavors, such as his annual Shaq-a-Claus holiday event and initiatives alongside his corporate partners. For more information, visit shaqfoundation.org.

About Pepsi Stronger Together

Pepsi Stronger Together is a national initiative to empower and engage communities around the country by providing tailored programming and resources that bring people together. It was conceived with the idea that now, more than ever, we must foster a sense of connection and belonging, starting by investing locally. Launched in May of 2020 in response to the COVID-19 pandemic — engaging its network of partners in the South to shine a spotlight on essential front-line workers in a variety of industries — Pepsi Stronger Together was expanded in October of 2020 by partnering with NBA teams and charitable organizations to foster, among other things, community and police relations.

Guiding PepsiCo is our vision to Be the Global Leader in Convenient Foods and Beverages by Winning with Purpose. Under this vision, Pepsi Stronger Together is continually evolving the program to respond to the cultural moment and meet the needs of communities across the United States. Stay up to date at pepsistrongertogether.com, where visitors can engage in conversation and learn about the latest community initiatives and how to give back. Follow the conversation on social media at @pepsistrongertogether.