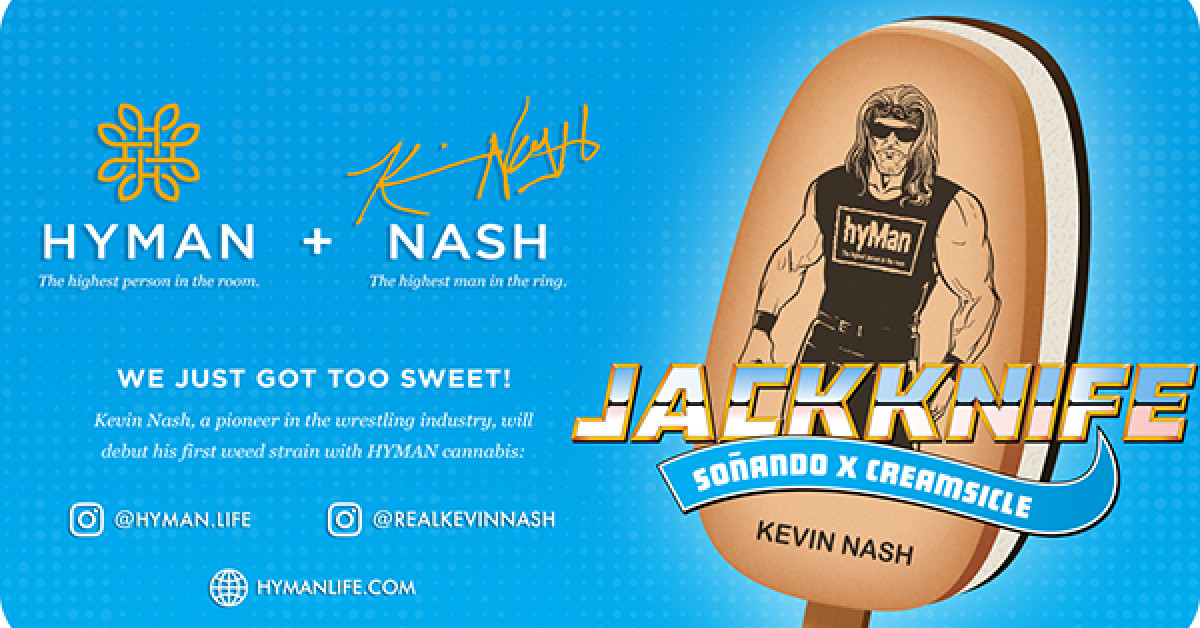 
DETROIT, August 24, 2022 (Newswire.com)
–
After years of professional wrestling, basketball, acting and more, Kevin Nash is officially starting his next endeavor in the cannabis industry by launching his very own strain with HYMAN Cannabis. Nash made the first official announcement at the GCW Notorious show, as mentioned on E Wrestling News and Wrestling Headlines back in January. Nash continues to discuss his excitement and involvement with this campaign on his podcast, KLIQ This.

Kevin Nash will be making appearances at select Michigan dispensaries to meet fans and sign autographs for the launch of Jackknife, his signature strain for his signature move. The two-day signing tour includes the following Michigan marijuana dispensary locations:

With a career garnering six world title belts and 21 championships, Nash is one of only eight individuals with the elite distinction of being twice inducted into the WWE Hall of Fame. While holding such an honorable title also comes years of physical wear and tear on the body. He was able to turn his pain into passion when he discovered he found relief with cannabis.

Nash is an occasional smoker and he began using Chill Medicated, a THC & CBD topical rub to treat his ailments. This topical doesn’t get you high while minimizing pain, inflammation and more. This was the gateway to his connection with MEDfarms, a management company based out of Michigan that works with countless cannabis entities. He truly believes that the use of pain medication is not the most suitable course of action to address his health concerns.

Naturally, Nash chose to name his signature strain after his signature move, Jackknife. Having undergone a rigorous process of pheno hunting with HYMAN cultivators, he opted for the strain crossing of Creamsicle (a favorite amongst stoners) with Soñando (one of HYMAN’s marquee genetics) to craft a legendary strain for a legendary pioneer in wrestling.

“I’m familiar with cannabis, and the one thing I look for when I’m consuming marijuana is quality. HYMAN cultivators have achieved a level of quality that is like nothing else I’ve tried. The clarity, potency, and their entire internal process is why I chose them – everything HYMAN does is by design,” Kevin Nash explained.

Aside from wrestling, Nash also played D1 college basketball for the Tennessee Volunteers. After three years playing with The Vols, he was inspired to join the Army after watching the movie Stripes. When he was honorably discharged from the Army, this led him to go back into basketball and play for various professional European basketball teams where a career-ending catastrophic knee injury – concluding his professional athletic career.

Nash also went into acting and is known for his involvement in Teenage Mutant Ninja Turtles, Magic Mike, Cameo in John Wick, Rock of Ages, Longest Yard and 2nd Punisher. Primarily posed as a comedic actor, he is proudest of his character portrayal as Officer Englehart in The Longest Yard. While already achieving so much in his lifetime, Nash has expressed his excitement to add cannabis in his carousel of involvements.

The Jackknife strain drops in Michigan on Friday, September 2, and will be available in a 3.5G Pre-Pack (Eighth) and 1G Handcraft (Glass Tip Joint) in dispensaries included below.